Defense Distributed is gearing up to unleash files for 3D printed guns on the Internet, while a coalition of attorney generals from nearly a dozen states fired back with lawsuits to stop the move.

Every day, there’s news of unparalleled innovation thanks to advances in 3D printing as the technology is tapped to upend how we produce everything from personalized accessories to cars, even human organs. Yet this week, there was a litany of backlash against the technology in response to a failed effort to block release of 3D files enabling the 3D printing of guns, including state attorney-led counter lawsuits and declarations from 3D printing service providers opting out of this specific order fulfillment.

In June, the State Department reached a settlement with Defense Distributed and its controversial founder Cody Wilson, allowing the gun access group to once again freely publish its 3D files and blueprints for making 3D printed weapons, including a single-shot pistol called “The Liberator,” the lower portion of an AR-15, and a Beretta M9 style handgun. Wilson and his group had been banned from uploading the materials during a years-long battle with the Obama administration, which had argued that publishing the gun models and 3D printing instruction manuals on the Internet violated firearm export laws, specifically those of the International Traffic in Arms Regulation (ITAR). The firm countered with a lawsuit of its own, which just settled in its favor giving Defense Distributed, and likely others to follow, the green light to once again make 3D gun files available online. 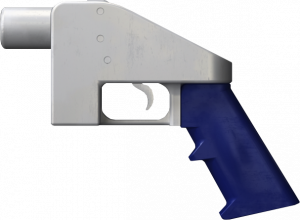 Central to the issue is the idea that 3D printed guns, along with other kinds of homemade firearms, fall into the category of so called “ghost guns,” meaning they are untraceable and part of the DIY gun-making movement, which many feel is dangerous given the precipitous rise in gun-related violence. While Wilson and Defense Distributed were gearing up to unleash rounds of 3D gun-making files on the Internet as of August 1, a coalition of AGs from nearly a dozen states fired back with their own lawsuits against the Trump administration to stop the movement. President Trump also weighed in with a tweet questioning the sense of 3D printing guns, although it was his administration that gave the green light to move forward. In another last-ditch effort, a Seattle judge blocked the release of the gun blueprints, at least temporarily.

Soon after the initial victory, Wilson’s Defense Distributed firm used its website to herald: “The age of the downloadable gun formally begins.” However, many in the 3D printing industry don’t see the first ruling as any kind of victory and are in fact doing what they can to minimize the number of untraceable guns to be out put by their 3D printing services.

That’s the stance of 3Diligent, a 3D printing services firm, who announced it will not fulfill any orders related to 3D printed guns. “We are not making a political statement, we are making a common sense statement,” says President Cullen Hilkene. “There are laws on the books that were passed in thoroughly bipartisan fashion to prevent the manufacture and distribution of undetectable and unmarked firearms. At 3Diligent, should customers submit fabrication requests that we believe are attempting to circumvent these laws, we aren’t going to fulfill that order.”

Hilkene says while he’s all for 3D printing’s ability to democratize innovation, he worried about a backlash against the technology as a result of 3D printed guns. He’s also calling on other 3D printing service providers to take a similar stand. “While we await legislation from Congress to close legislative loopholes, we believe that organizations like 3Diligent that provide access to cutting edge digital manufacturing technologies should self-govern to limit the spread of unmarked and/or undetectable weaponry,” he says.

See CNN's coverage of 3D printed guns in the video below.