When it comes to making parts out of metal, additive, subtractive and hybrid technologies may all offer a solution that meets your needs. Mindful of the old adage, “what the customer really wants is a hole, not a drill,” system manufacturers and supporting businesses continually work to supply a tool that simply gets the end-job done. That need is increasingly being addressed by additive manufacturing (AM), sometimes combined with subtractive (traditional) processes.

AM is gaining acceptance across an ever-widening range of industries. Tim Caffrey, senior consultant at Wohlers Associates, reports that “unit sales of metal AM systems increased 75% from 2012 to 2013, growing faster than the rest of the industry.” He notes that while medical applications form a large segment of this market, aerospace is definitely growing, referring to GE Aviation’s 2013 acquisition of Morris Technologies with its EOS direct metal laser sintering (DMLS) technology.

“The GE Aviation fuel nozzle project is going forward a little bit slower than we thought, but as far as I know, there is no Plan B,” Caffrey says. He adds that Airbus has been fairly visible about working with AM, along with Rolls Royce and Pratt & Whitney. Aerojet Rocketdyne is also working on 3D-printed rocket-engine components.

In this second article of a two-part series on the world of AM materials (see “3D Printing’s New Plastics, Ceramics, Composites and More,” Desktop Engineering October 2014), DE reviews developments in metals by longtime players and newer entries in the field, activity with standards organizations, technology resources, and market implications behind these processes.

News and Nuances in Metals for AM

Titanium alloys, nickel alloys, cobalt chrome and several stainless steels are the most common materials used for AM processing, but years of behind-the-scenes development are paying off with even more options. The following companies represent just a few of the metal AM systems; these all work with powder-bed formats, but create parts through different technologies. 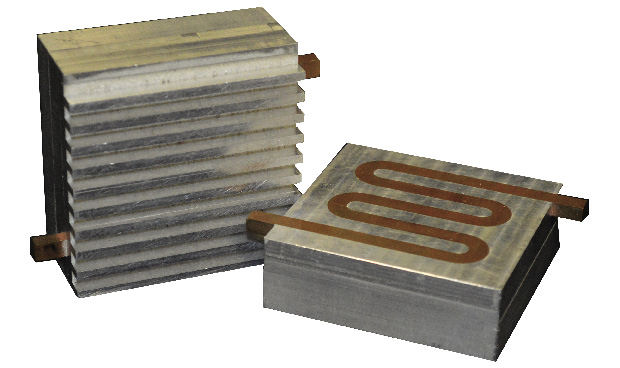 Thermal management device made of copper and aluminum ultrasonically bonded on a Fabrisonic SonicLayer 7200 system. Image courtesy of Fabrisonic.

In mid-September, EOS announced it has partnered with Cooksongold (a UK-based supplier of fabricated precious metals) to launch the PRECIOUS M 080 DMLS system. Equipped with a 100-watt fiber laser whose small spot-size allows extremely fine resolution, the PRECIOUS M 080 has a build volume of 80mm diameter by 95mm high, including the build platform. The system currently operates with a variety of gold alloys targeted to luxury watches and jewelry; additional materials are planned. Earlier this year, EOS announced a new corrosion-resistant grade of titanium TI64ELI and a highly ductile SS316L good for medical instruments and watch cases, bringing its own material count to 13.

Nickel-based alloys are desirable for their resistance to heat and corrosion. Arcam, with its Electron Beam Melting systems, has added nickel-based Inconel 718 to its material list, joining EOS, 3D Systems, Concept Laser, Renishaw and SLM Solutions, among others, in offering this material for sintering/melting.

Taking a very different approach to producing fully dense AM nickel parts, ExOne, with its jetted-binder-on-powder technology, introduced Inconel Alloy 625 in May; parts display an impressive 99% density. This achievement brings the company a big step toward its goal of single-metal 3D-printed parts (compared to its stainless steel/bronze-infiltrated process).

ExOne continues to put extensive effort into materials development, saying its ExMAL group is on track to qualify a new industrial material every six months. It’s also working with the University of Pittsburgh and Magnesium Elektron Powders on magnesium and iron-based alloys for biomed applications.

Fusing a bed of powdered metal represents one approach to metals AM. Another technique, direct-metal-deposition (DMD), involves injecting raw material into a heated melt-pool and either fusing it onto an existing part or free-forming it directly on a build-platform. DM3D Technology (previously POM) and Optomec have employed variations on DMD systems for a decade or more; RPM Innovations and Sciaky are more recent entrants in this field; and NASA’s Jet Propulsion Laboratory has its own related research program. 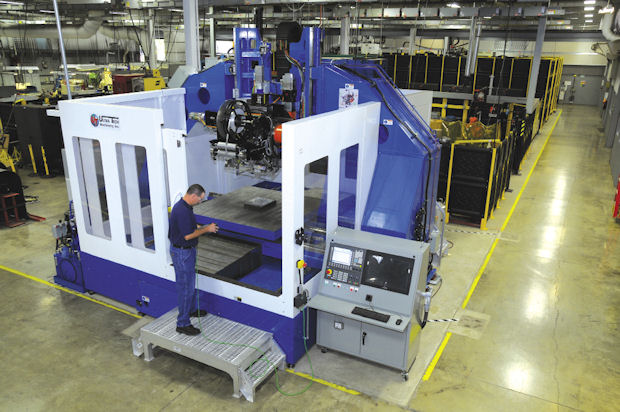 Wohlers Associates’ Caffrey says only DMD offers highly desired, multi-material options for metals. Bhaskar Dutta, COO at DM3D Technology, notes that it takes a team of design, material and process engineers to define the best approach to building such parts; his company has extensive experience with customizing blended microstructures—offering dual- and quad-hopper systems for combining materials such as metals and ceramics.

• AMPM2015 (Additive Manufacturing with Powder Metallurgy 2015 Conference, San Diego, May 17-19, 2015; AMPM2015.org)—A Who’s Who of worldwide metal AM industry experts headlined last year’s inaugural conference, sponsored by the Metal Powder Industries Federation (MPIF.org), a not-for-profit federation of related trade associations that has dealt with powdered metals since 1944. Greg Morris of GE Aviation and Joseph Strauss of HJE Co. kicked off the event, which included 12 sessions with 45 presentations. The 2015 conference is timed to allow attendance at SME RAPID 2015 (Long Beach, CA, May 18-21, 2015).

• An Introduction to Metal Additive Manufacturing / 3D Printing (Metal-AM.com/introduction_to_metal-additive_manufacturing)—Excellent overview of technologies, materials, finishing processes and the market, all in one place. This website launched in May 2014.

Applying metal AM to part repair is a topic gaining more attention through the activities of America Makes, the National Additive Manufacturing Innovation Institute program. As part of this effort, Optomec will lead the “Re-Born in the USA” project for repair of aerospace metal components for the U.S. Air Force. Optomec’s powder-fed DMD technology (based on the LENS process licensed from Sandia National Laboratories) can add metal onto an existing substrate of almost any 3D shape.

Inspired by customer requests for large-part volume repair and manufacturing, in 2009 RPM Innovations, a spin-off of RPM & Associates, developed its own industrial-grade Laser Metal Deposition (LMD) equipment that features a 5x5x7-ft. work envelope and multiple powder feeders. Company founder Robert Mudge says that writing their own motion-control software has been the key to running the equipment 24/7; the company currently operates three such systems, doing jobs that can go for 1,500 hours.

Another company with a growing presence in the DMD world is Sciaky, founded in 1939 as a welding system manufacturer. In 2009, it introduced its Electron Beam Additive Manufacturing (EBAM) process that deposits metal into a melt-pool via wire feedstock. Depending on part geometry and material selected, the Sciaky VX-110 system can deposit near-net layers at a rate of 7 to 20 lbs. per hour in a build envelope of more than 9 ft. each in XYZ. The company has been awarded several U.S. Department of Defense (DoD) and America Makes contracts, working with such partners as Lockheed Martin Aeronautics and the Applied Research Laboratory at Pennsylvania State University.

In a Class of Their Own

AM is indeed an umbrella term for dozens of fabrication technologies. Fabrisonic, based in Columbus, OH, is re-energizing a version of layered AM formerly called ultrasonic consolidation, now termed ultrasonic additive manufacturing (UAM). The company began in 2008 as a joint venture between EWI (an Ohio-based non-profit) and Solidica (now defunct, which had developed the low-temperature, sound-based process). UAM builds objects by ultrasonically bonding layers of metallic foil, then performing precision computer numerically controlled (CNC)-machining on the solid object after each layer. The process forms 100% dense parts and supports welding dissimilar metals—without the formation of brittle intermetallics.

Fabrisonic’s CEO, Mark Norfolk, says the company has enjoyed 70% growth since 2012, and offers both part production and machine sales. Its largest system, built for repairing existing parts, can even ultrasonically bond material over a curved surface; the company has been awarded funding to add a rotary axis for welding on cylindrical parts. An interesting option exclusive to the UAM process is that of inserting continuous fibers or stainless steel meshes between layers, creating metal matrix composites that add high strength at low weight for aerospace applications.

A hybrid of another kind is the LUMEX Avance-25, a combination selective-laser-sintering (SLS) and machining system from Matsuura Industries now available in the U.S. The equipment houses an end-mill supplied by a tool magazine that can accommodate 20 milling tools. System operation alternates laser-sintering a succession of 10 layers of 0.05mm-thick powdered metal, then milling the part as needed, producing a finished part with high dimensional accuracy and surface smoothness. Matsuura has targeted customers looking to reduce production time of complicated mold dies.

You know the basic benefits of AM with metals: cost-savings when creating a one-off part, combining a multi-part assembly into a single piece, constructing complex inner geometries and using smaller amounts of expensive materials. But for more detailed comparisons of what to use when, and how to justify equipment investments in the broader business scheme, check out these timely resources:

—PJW
German manufacturer DMG Mori is marketing its own version of a hybrid AM system: The Lasertec 65 combines laser DMD technology with a five-axis milling machine. The system features a build volume of 23.6 x 15.7 in.; wall thicknesses of 0.1mm to 5mm are possible.

Materials development by independent suppliers is expanding as more AM systems work with non-proprietary powders. Metalysis of Rotherham, UK, working with engineers at Sheffield University’s Mercury Centre, has developed a new way to produce titanium powder that is cheaper compared to the usual multi-step, energy-intensive Kroll process. It extracts titanium from rutile sand (naturally occurring titanium ore present in beach sands) in a single electrolysis step. Dion Vaughan, CEO of Metalysis, says that the process could “reduce the price of titanium by as much as 75%.” The company is also developing tantalum powder.

Thinking of developing your own materials, or at least doing R&D on the latest equipment? Linear Mold & Engineering is currently expanding its facility space and AM machine capacity.

“We see ourselves as a solution provider, offering not just part production but training sessions, consulting and, coming next year, leased ‘pods’ for private customer R&D,” says Director Paul Parzuchowski. He says Linear Mold & Engineering will not only provide dedicated or time-shared equipment, but also maintenance and training. The goal is to help its customers develop new materials, techniques and products using high-end AM systems.

From Professional to Personal and Back

No discussion of metal AM news would be complete without mentioning the start-ups tackling desktop metal systems. Vader Systems, matterFab and Newton3D have all emerged this year as contenders in the (previously non-existent) personal metal-AM system space, and warrant continued attention.

Among the big-name players, AM developments happen daily. GE’s Avio Aero division recently developed a new, higher-power electron-beam gun for Arcam equipment that in turn will allow use of lightweight titanium aluminide for turbine-blade production. JPL is working on depositing layers of metal on a rotating rod, creating parts with gradient metal alloys. And the buzz from the 3DPrint Show London 2014 is to watch for Stratasys to directly enter the metals market, rather than rely on third-party equipment.