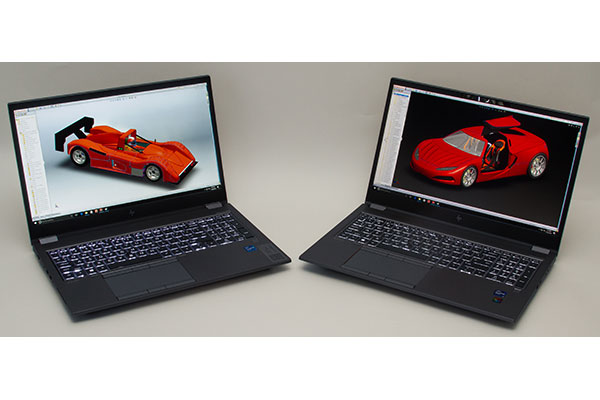 HP recently updated its mobile workstation lineup, introducing G8 versions of its ZBook portfolio, which now includes four models. The ZBook Firefly—available in 14- and 15-in. versions—is the lightest, designed for mobility and aimed at those working primarily in 2D. The 15-in. ZBook Power offers the best value and is targeted at students.

ZBook Studio, a 15-in. favorite since its original introduction, offers a balance of value, performance and mobility, and is designed for 3D graphics and video. At the top of the lineup, the ZBook Fury—available in 15- and 17-in. models—is recommended for 3D modeling, virtual reality (VR) and data science.

Billed as the world’s most expandable 15-in. workstation and most customizable 17-in. workstation, the ZBook Fury offers desktop-caliber performance in a sleek, slim design. We were quite excited when HP sent us a ZBook Fury 15 G8 equipped with an NVIDIA graphics processing unit (GPU) to review. We were even more thrilled when we then received a second similar ZBook Fury 15 G8, equipped with a discrete AMD graphics card.

Based on 11th-gen Intel processors, the HP ZBook Fury 15 G8 comes housed in a satin-finished, aluminum and magnesium alloy case. A polished Z logo is etched onto the lid, and triangular rubber strips across the bottom of the case keep the system from sliding around and raise it slightly to aid airflow. 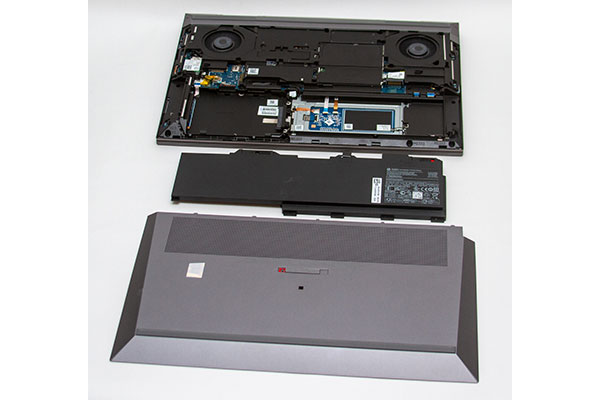 Fig. 2: The HP ZBook Fury 15 G8 is one of the few modern mobile workstations with a user-accessible interior.

Raising the lid reveals a spill-resistant 101-key backlit keyboard with a nice long key travel and separate numeric keypad. Although most keys are full size, there are some compromises. For example, the top row of function keys as well as the Up and Down cursor keys are only half-height, and the power button is embedded within the top-row function keys.

An optional fingerprint reader ($11) is below the Enter key. A pair of speakers, connected to a superb Bang & Olufsen sound system, are located above the keyboard, and a very responsive gesture-enabled 4.87x2.37-in. touchpad is centered below the spacebar. The touchpad has dedicated buttons above and below and the ZBook Fury 15 G8 also includes a pointing stick, nestled between the G, H and B keys. 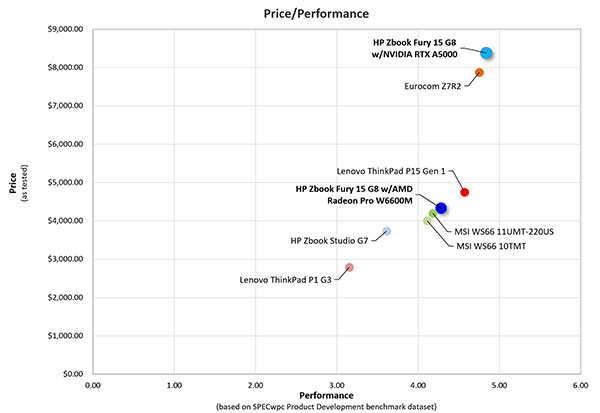 Function keys enable you to control screen brightness, adjust volume, toggle keyboard backlighting and mute the built-in microphone. A function key can toggle the HP Sure View integrated privacy screen, a feature not included in our evaluation unit. Several keys, such as Caps Lock and Number Lock, have their own LEDs to indicate when they are selected.

A 720p webcam is centered above the display, flanked by a pair of microphones, an ambient light sensor and camera lights. The system we received that was equipped with NVIDIA graphics included an infrared camera (an $8 add-on) while the ZBook Fury 15 G8 with the AMD graphics card came with a standard webcam. The cameras on both included a privacy cover.

Unlike the majority of recent thin, lightweight systems, the HP ZBook Fury 15 G8 includes an ample selection of ports. The right side hosts an SD card reader, an HDMI port, a mini-DisplayPort, a pair of USB Type-C Thunderbolt ports, a power connection and an LED battery light. Ports along the left side consist of an RJ-45 network jack with status lights, a security cable slot, a pair of USB 3.1 Gen 1 ports and an SC smart card reader.

All HP ZBook Fury 15 G8 systems are powered by Tiger Lake CPUs based on Intel’s latest 10nm SuperFin technology. Prices currently start at $2,292 for a computer based on a 6-core 2.9GHz Intel Core i5-11500H CPU, 16GB of RAM, integrated Intel ultra high-definition (UHD) graphics and a 256GB M.2 solid-state drive (SSD). But prices fluctuate. The current starting price is $200 from when the system was initially released, but $650 lower than it was just a few weeks ago [as of early February].

Of course, that is just the starting point. HP offers a choice of five other eight-core CPUs, including a 2.6GHz Xeon W-11955M, as well as a choice of discrete graphics cards from NVIDIA and AMD.

Price as tested with NVIDIA graphics: $6,534

The second system included a less-expensive Intel Core i7-11850H CPU, a CPU with a 2.5GHz base speed and a 4.8GHz maximum turbo boost, which added $645 to the base price. Both CPUs include a 24MB Smart Cache and feature a thermal design power (TDP) rating of just 45 watts. That second ZBook Fury 15 G8 system also included an AMD Radeon Pro W6600M GPU with 8GB of GDDR6 dedicated memory and featuring 1792 Stream processors, 28 compute cores and 28 ray accelerators. The VR-ready Radeon graphics board, which added $687 to the price, has a 128-bit interface and a 224GB/s bandwidth, while consuming just 90 watts.

HP also offers five different in-plane switching displays. The base configuration includes a 1920x1080 panel rated at 250 nits brightness and 45% coverage of the National Television Standards Committee gamut, and was the screen provided in the system we received with the AMD Radeon Pro W6600M. There are also brighter full high-definition panels, including one that incorporates the HP Sure View privacy screen. The system we received equipped with the NVIDIA RTX A5000 GPU came with a 4K UHD (3840x2160) 120Hz Next Gen HP DreamColor display ($488) rated at 600 nits. A UHD non-DreamColor touch-enabled panel made with Corning Gorilla Glass is also available.

The HP ZBook Fury 15 G8 is also one of the few mobile workstations available with a user-accessible interior. A small slide switch unlocks the removable bottom panel. You can then remove the internal battery to access four M.2 PCIe slots. Alternatively, the system can be configured with a 2.5-in. SATA hard drive instead, and HP offers 7200rpm drives ranging from 500GB to 2TB.

The system with the NVIDIA graphics came with a single 1TB NVMe SSD ($365), while the one with AMD graphics included a 512GB SSD ($130). HP sells drives ranging from 256GB to 2TB, so you could configure a ZBook Fury 15 G8 with 8TB of storage. The system also provides four small outline dual in-line memory module (DIMM) slots—two accessible from the bottom and two located beneath the keyboard—enabling the system to support up to 128GB of RAM.

While 16GB is included in the base configuration (and was what was supplied with the system containing the AMD GPU), the system we received with NVIDIA graphics came with 32GB ($270), installed as four 8GB 3200MHz modules. Error-correcting code (ECC) memory is available for systems equipped with a Xeon processor—but with it the system will support only 64GB of ECC RAM.

All ZBook Fury 15 G8 systems also include an Intel AX201 Wi-Fi 6 network adapter plus Bluetooth 5.2 and an HP Long Life 94 WHr battery. That battery kept our AMD-based system running for more than 10.63 hours, while the more demanding components in the ZBook Fury with NVIDIA graphics cut its battery life in half—to just 5.3 hours. Due to the upgraded components, both evaluation units came with a 200-watt power supply, which added $64. Both ZBook Fury 15 G8 systems remained cool and nearly silent throughout our tests.

Your Results May Vary

While the HP ZBook Fury 15 G8 equipped with the NVIDIA RTX A5000 GPU delivered first-place results on two datasets within our extensive collection of benchmarks, its performance ranked near the top in almost every category and now holds third place on the SPEC Viewperf test of graphics performance. The system’s performance, equipped with the AMD Radeon Pro W6600M GPU, placed it closer to the middle of the pack, compared to other mobile workstations we have recently reviewed.

As expected, the ZBook Fury 15 G8, with AMD graphics and half the amount of memory, did not perform nearly as well, ranking fourth among the eight systems we have reviewed most recently, completing our rendering test in 36.5 seconds.

Like all other HP mobile workstations, the ZBook Fury 15 G8 is independent software vendor-certified for a wide range of applications from Autodesk, Dassault Systèmes, PTC and Siemens.

It has also passed military certification tests and other quality checks to ensure it can perform in extreme conditions. The system is backed by a 3-year warranty (with extended support options available), is protected by HP Sure Start and comes with HP ZCentral Remote Boost (formerly known as Remote Graphics Software) as well as HP Performance Advisor.

But HP also informed us that the system with the AMD graphics was actually available through its dealer channel for $2,950, while the ZBook Fury with the NVIDIA RTX A5000 graphics could be purchased as configured for $5,740. When we questioned the discrepancy, HP responded:

“HP regularly reviews pricing and adjusts based on market conditions while continuing to meet the needs of our customers. For competitive reasons, we don’t publicly discuss our pricing strategy. HP provides partners, customers and resellers with advance notification of price adjustments.” 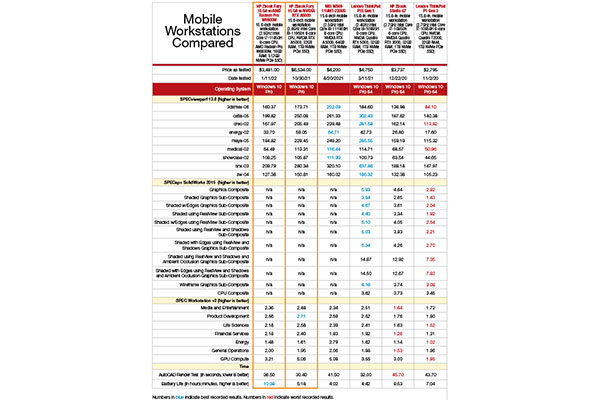 We wish pricing could be more transparent. Prospective customers faced with costs higher than HP told us should be prepared to do some negotiating. While both sets of both prices represent a lot to spend for a mobile workstation, the price tag buys you an excellent system offering great performance, expandability and security. (Note that we included the price shown on the HP website in our charts and graphs.) As our experience shows, varying the components can change the price dramatically and significantly impact performance and battery life. CPU options range from $300 to more than $1,000, a 4K display can increase the cost by more than $500, and GPU choices can tack on $364 to more than $3,000. The amount of memory and internal storage will also affect cost and performance.

When all is said and done, however, the HP ZBook Fury 15 G8 is a great mobile workstation that should satisfy the needs of a majority of DE readers for years to come.