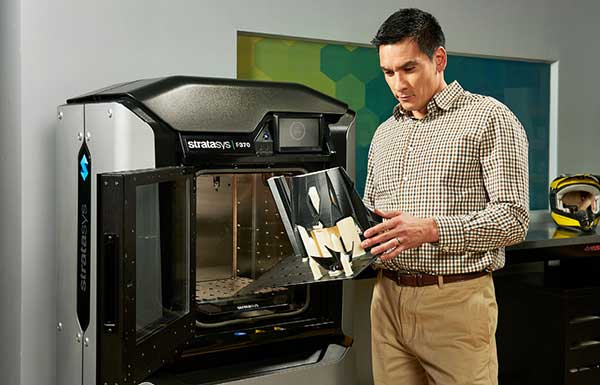 Ready access to a 3D printer such as the Stratasys F370 helps streamline the design process and shorten development cycles. Image courtesy of Stratasys.

In 2017, motorsports champion Team Penske joined forces with 3D printing solution provider Stratasys. The companies entered into a formal agreement in which the race car builder would use Stratasys equipment to produce tooling and end-use components, and Stratasys would provide them with the design, application and product support. The partnership is still profitable and rewarding for those involved.

They renewed that three-year agreement earlier this year, although they withheld the news due to the 2020 racing season’s pandemic-related delay. 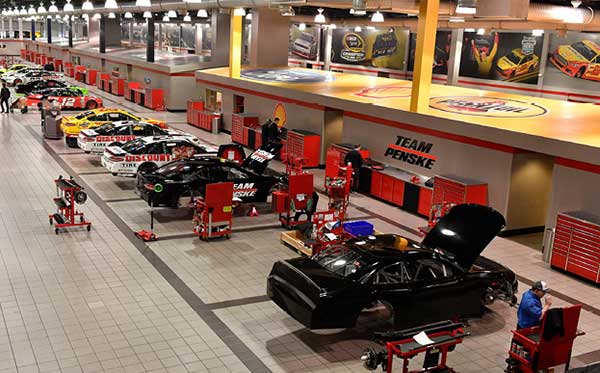 A bird’s-eye view of the shop floor at Team Penske’s Mooresville, NC, headquarters. Image courtesy of Stratasys and Team Penske.

“Nobody was racing,” says Patrick Stewart, marketing services manager at Team Penske. “I suppose we could have announced it along with the launch of virtual racing, but all of us wanted to see real cars on real tracks before breaking the news. We’re delighted to announce it now.”

Team Penske already had extensive manufacturing capabilities at its Mooresville, NC, headquarters, such as state-of-the-art machine tools, welders, and fabricating equipment. Starting with a large-format F900 fused deposition modeling (FDM) and J750 PolyJet printer, followed by a Fortus 450mc production system and “plug-and-play” F370, they’ve taken their capabilities over the top in terms of design speed and flexibility. 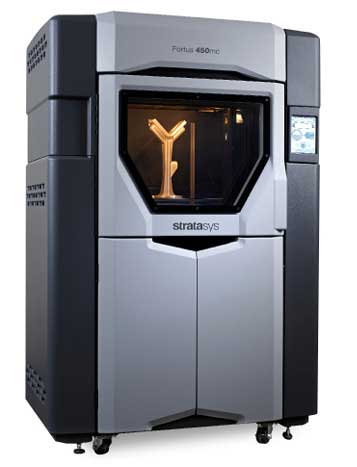 One example of its manufacturing capabilities comes from an event at the Indianapolis Motor Speedway, where summer temperatures combined with a new protective device raised concerns over driver comfort, and ironically, their safety. That’s according to Team Penske production manager Matt Gimbel, who explains that the Aeroscreen was designed to shield drivers from road debris and other flying objects.

It was a great idea, except for one problem: The unexpected rise in temperature within an Aeroscreen-equipped cockpit; temperatures high enough to cause heat exhaustion, as seen during the July 4th IndyCar event.

“No one was arguing over the Aeroscreen’s value, but we had to do something about the excess heat, especially with the Iowa 250s coming up later that month,” says Gimbel.

Designers at Team Penske worked with team members from Arrow McLaren SP, Andretti Autosport and IndyCar, and quickly developed a cooling duct that would channel air to the driver’s cockpit. The problem was then how to manufacture these ducts with less than one week until the next race. Knowing that 3D printing was the only viable solution, Team Penske reached out to IndyCar, who tapped Stratasys for help. 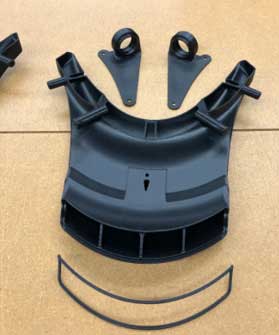 “We received the final design the Saturday before the race, and everyone was scheduled to be in Iowa that upcoming Thursday,” says Pat Carey, senior vice president of the Americas at Stratasys. “We had to jam pretty hard, but once we validated the build process, we just reached out to a few of our internal departments for help. Between their printers and the available capacity at our sister company, Stratasys Direct, we were able to make 24 cooling ducts, enough for all of the teams competing that weekend. It was fun to see it all come together so quickly. Best of all, Team Penske won both races.”

The design challenge was fun, but not unexpected.

“That’s the great thing about additive,” Gimbel notes. “If we’d had to make the ducts via traditional methods, it would have taken at least two weeks, probably much more, not to mention the tooling costs and lack of design freedom. 3D printing just lets you get to the finished product more quickly. Because of this capability, it’s become an integral part of our design and manufacturing processes.”

Stewart agrees, and having worked for six years in Team Penske’s IndyCar pit crew, has firsthand experience with the opportunities that 3D printing presents.

“When it comes to working on the car, whether in the shop or at the track, there are big differences in the equipment each team uses,” he says. “You can stand at the end of the pit and see who has the best solutions; in our case, these are often designed and 3D-printed in-house.”

This could be something as simple as a fan to cool the brakes down during practice sessions, Stewart adds, shaking his head at some of the homegrown solutions he’s seen over the years.

“Some teams will use corrugated tubing that’s been duct-taped to a leaf blower,” Stewart says. “It sounds crazy, I know, but finding a more effective way to accomplish simple things like that can make the difference between winning and losing.”

To address this particular problem, Team Penske 3D-printed a special fan that quickly reduces brake temperature by 30 degrees Fahrenheit or more compared to the competition. They also made a carbon fiber fuel handle using 3D-printed tooling that allows the pit crew to more easily fill the racecar; a handle made to Stewart’s exacting specifications.

“Not only did it look sexy, but it was the lightest, most ergonomic handle I’ve ever used,” Stewart laughs. “We even embedded it with timing lights.”

Carbon fiber-reinforced material might be a game changer, but it’s not the only one. Between their four 3D printing platforms, Team Penske designers have access to dozens of engineering-grade polymers, the FDM Nylon 12CF (carbon fiber) among them.

“TPU is a great material,” he adds. “So is Diran, a tough, Nylon-based thermoplastic specific to Stratasys 3D printers. We just started playing with that one fairly recently and find that it’s excellent for use in jigs and fixtures. You can bang on it all day long and you won’t leave a mark.” 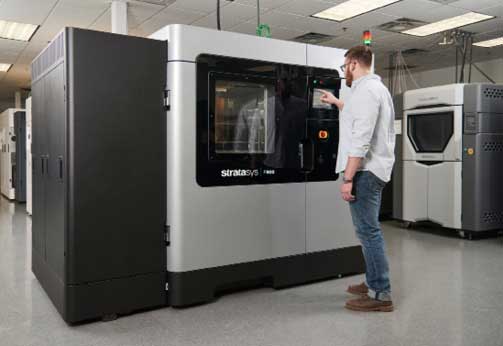 With a build envelope measuring nearly 1 cubic yard, the Stratasys F900 ranks as one of the largest high-performance FDM printers available.

There’s also ST-130, a soluble designed for sacrificial tooling like that used to produce tanks, ductwork and shrouds. Such tooling is a critical component of racecar manufacturing, Gimbel notes, and the team that builds it most quickly and cost-effectively is best equipped to bring home the championship.

Here again, 3D printing provides Team Penske with a competitive edge; where it might take weeks or even months to machine a mold for the bellows or tanks just described, Gimbel and his crew can often 3D print one overnight.

“The rate at which we can iterate different designs has made a big difference in the way we do things, especially when you talk about PolyJet,” Gimbel says. “When we first got it, the engineering department was blown away by how fast we were turning parts around. Between that and the different material options, it gives us capabilities we didn’t have before.”

Stewart agrees. “Having the Stratasys equipment on-site greatly speeds up the development process,” he says. “It means we don’t have to rely on outside resources for anything. More importantly, it allows you to do four or five iterations in the time it would normally take to do just one. This can make the difference between a winning design and one that’s not.”

These benefits came at a cost, however. Both Team Penske members note the learning curve that comes with 3D printing, but were quick to point out that the partnership with Stratasys eased this particular pain significantly. So did the company’s GrabCAD Print software, which is said to guide the user through the build process via an obstacle-free workflow. It also simplifies machine monitoring, and allows operators to check in on print jobs from anywhere with internet access.

“GrabCAD Print runs across all of our printers and played a role in our ability to turn around the Aeroscreen ducts so quickly,” says Stratasys’ Carey. “It has numerous functions that make common 3D printing tasks easier, features like geometry optimization, color matching and automatic support generation. There are also several advanced tooling controls that let an engineer build up around a boss, for example, or fill in certain areas with a mesh structure for weight reduction, something that’s obviously critical to racing vehicles.”

For the members of Team Penske, the ready access to Stratasys’ 3D printing technology boils down to one thing: continuous improvement.

“It means iterating faster, producing more design options and figuring out which one’s going to work best, and that means getting to the racetrack with our latest and greatest designs,” he says. “If we can do all that more quickly than the competition, then we’re going to win the race. That’s what 3D printing does for us.”