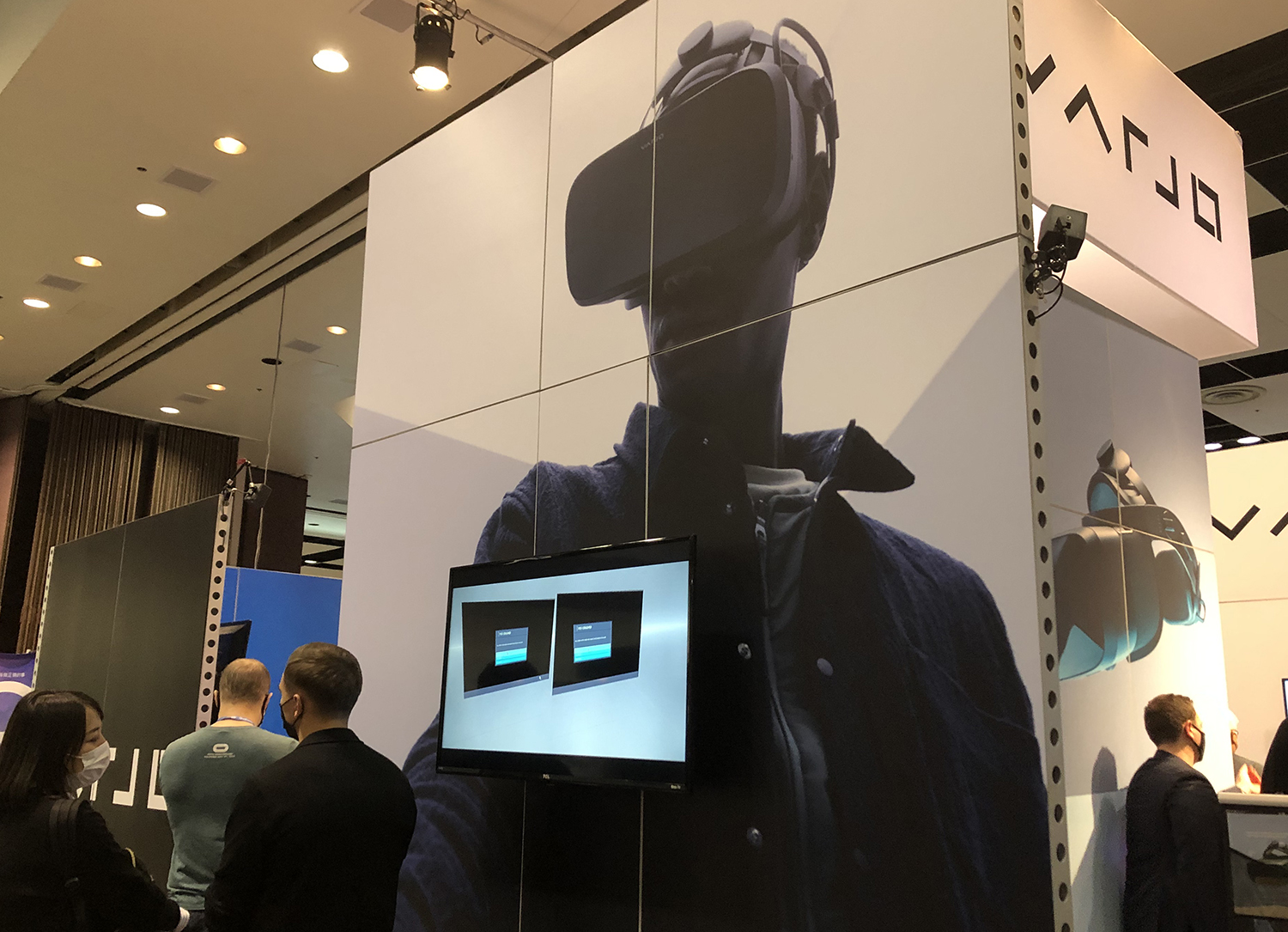 Attendees line up to test-drive AR devices in front of the Varjo booth. Photo by Kenneth Wong, DE.

This month, in the openning keynote of AWE (Augmented World Expo) 2021, Ori Inbar, the founder of AWE and Super Ventures, welcomed both live and online attendees. Directing his comment to the virtual audience watching the livestream, he quipped, “I wish you could feel the energy in the room. You could smell the hand sanitizers.”

The site, he reminded the attendees, was historic in many ways. “Vuforia, the mother of mobile AR, was launched right here on the stage 12 years ago. And Tom Furness, the beloved grandfather of VR, shed a tear on this stage, and inspired us all to build a better world,” he recalled. “After 893 days, the XR community is back like a family,” he added.

But the smaller than usual crowd suggests the unexpected emergence of the Delta variant thwarted some attendees. According to Inbar, “There were a few attendees who deferred their passes for 2022. 3019 registered to attend in person, and nearly all of them checked in.”

AWE has also launched a YouTube channel, featuring recorded sessions. They were livestreamed during the conference. The show drew more than 500 exhibitors.

Hardware makers HP, Lenovo, and Vive, and Varjo were among the exhibitors, along with microprocessor providers such as Qualcomm. Facebook also put in an appearance under its new brand, Meta. Also present was OVR (Olfactory VR) Technology, suggesting the XR industry is thinking beyond the visuals immersion.

A number of haptic device makers and technology suppliers were also in the crowd, showing how AR experiences could be augmented with touch sensations. One of them was bHaptics, demonstrating its haptic vest. The vest and the accompanying arm and leg bands are quipped with ERM (eccentric rotating mass) motors to simulate vibration. The method adds force feedback to punches, touches, and gunshots in virtual experiences.

Soojeong Kim, Business Development Manager, bHaptics, said, “The vest can be used in many different contexts, like musical concerts, movies, and military training, but gaming is currently our biggest target market.”

Scope AR, an app developer, showcased its Worklink app, part of its enterprise AR suite. Worklink is a remote assistance app that “provides live expert guidance and work instructions at any given moment, on any device,” the company wrote. “We took the actual CAD model, aligned it with the physical device, so the user can see the different places on the device with work instructions,” explained Charlie Ferriera, Customer Success Manager, Scope AR.

With the tagline “AR Made Easy,” BUNDLAR demonstrated AR apps could be created easily in its code-free drag-and-drop environment. “One reason we really like to work with companies focussing on training and development is, there's no shortage of content,” said Aaron Deets, Sales Account Executive, BUNDLAR.

For a video report from the showfloor, please watch the clip below.