Bricsys celebrated the first anniversary of the acquisition at its most recent annual conference by showing off new partnerships, new drafting technology and more.

Bricsys celebrated the first anniversary of the acquisition at its most recent annual conference by showing off new partnerships, new drafting technology and more. 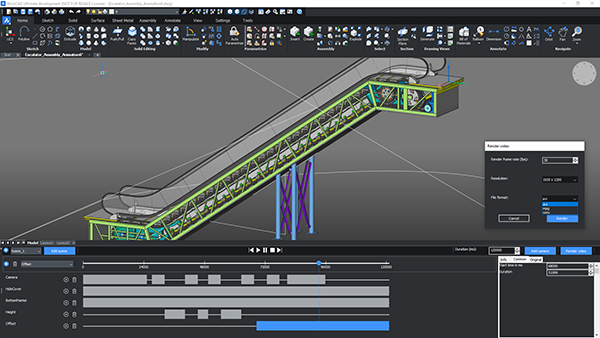 BricsCAD developers created this design for an escalator to demonstrate BIM and Mechanical drafting advances. Image courtesy of Bricsys.

When small CAD developer Bricsys was acquired in October 2018, it went from being a 110-person company to a division of engineering technology conglomerate Hexagon, a 20,000-employee company. Bricsys celebrated the first anniversary of the acquisition at its most recent annual conference by showing off new partnerships, new drafting technology and a restatement of its commitment to providing a “one platform for all disciplines” approach to the DWG-compatible drafting market.

“One platform for all is a unique offering, and it will be our focus,” said Erik de Keyser, Bricsys co-founder and CEO. As an example, de Keyser noted, “We are the only ones who can do mechanical design built into BIM.” For BricsCAD it is just a matter of selecting which workspace to use, whether it be general drafting, mechanical design or building information modeling (BIM).

Many of the enhancements coming to the next version of BricsCAD (V20, due before the end of 2019) are for the architectural market. But Bricsys has always been a company serving the drafting needs of the mechanical market, and is keen to use this twin focus to bring new possibilities to market.

One example of a feature designed for one market segment finding a use elsewhere is BLOCKIFY, a BricsCAD command that can turn a drafted object into a block by using an artificial intelligence (AI) routine to identify a similar object in the database of existing blocks. Once a match has been found, the command will replace every instance of the object into a block.

“We don’t believe drawing is bad,” said Don Strimbu, Bricsys VP of Communications. “DWG is a de facto standard. New modern applications built on DWG will take it to new realms for design and communication.”

As an example of how Bricsys is moving in modern directions with DWG-based drafting, two members of its AI development team shared their recent work. “What is the point of adding AI to CAD?” asked Chloe Guidi. “The answer is, ‘fixing your workflow.’ Eighty percent of repetitive tasks come from the 20 percent of creative design. So we focus our AI work on the elimination of time-consuming tasks.”

One example shown was the ability to automate the process of adding parametric data to blocks (dynamic blocks). Another AI enhanced process is automated propagation, which identifies selected details and searches throughout a drawing for other places the object should be placed.

The AI team is currently working on an algorithm that can learn from existing library components to suggest relevant placement of components in a drawing. The features won’t ship with the launch of BricsCAD V20 this year, but will be added a few months later.

One year ago Bricsys offered its mechanical workspace as the focus of a separate product, BricsCAD Mechanical. To demonstrate new features, members of the Bricsys Mechanical team used a 3D drawing of an escalator designed from scratch for the conference. For some of the BIM-related workflow presentations, the escalator was used to demonstrate placing mechanical systems in an AEC (architecture, engineering, construction) drawing.

But new features specific to mechanical design were also demonstrated. In addition to showing specific features for each industry, using the escalator also demonstrated the BricsCAD ability to have an object be both a BIM object for AEC and a fully parametric mechanical model at the same time.

As explained by the BricsCAD mechanical team, when a mechanical system like an escalator is also a BIM object, then it can be used both in the building information model and the manufacturing BOM. If the escalator needs to change for architectural reasons, any parametric shifting of the escalator model can immediately update the BOM.

In addition to having BOM and BIM data in one drawing, Bricsys takes advantage of the DWG drafting environment to promote a “design first” mechanical design methodology. The turnstile at the base of the escalator was originally a solid, and a material was not specified. In the demonstration, the turnstile was converted into sheet metal without changing the design. 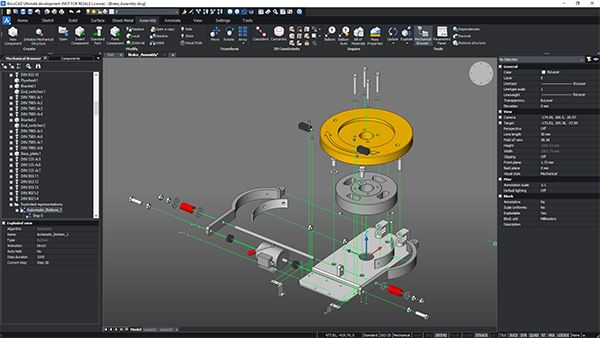 “If you design from the start as sheet metal, then you are driven by the functions available,” said BricsCAD Mechanical lead designer Christian Lecomte. “In most software this is a limitation. In BricsCAD you design from design intent, not from how the product will be built.” Such freedom to specify manufacturing technique after design means assemblies from “other CAD systems” can be imported and modified as required, Lecomte said

Now with Rhino Inside

BricsCAD users will have to purchase a Rhino license. Both companies still sell their software with perpetual use licenses, unlike their rival Autodesk, who has aggressively moved from perpetual licenses to subscription agreements.

In practice, the combination of BricsCAD and Rhino/Grasshopper means designers can move between drafting and NURBS-based modeling in the same application. Objects created using Rhino.Inside are stored as native (DWG) objects in the BricsCAD drawing file.

Grasshopper can drive parametric design exploration inside BricsCAD, and users can run third-party Rhino or Grasshopper routines or write custom Grasshopper scripts from within BricsCAD. More than 500 third-party applications are available for Rhino, noted Bricsys CEO de Keyser, “and all of them can now be run in BricsCAD.”