The digital twin was created in an effort to cut emissions, planners say.

The digital twin was created in an effort to cut emissions, planners say.

Industry Focus: The Digital Factory
The manufacturing space has lately been focused on two trends with a common denonimator: digital transformation, and the...
Digital Twin Resources

Las Vegas has become the latest city to embark on constructing a digital twin, after a digital model was on display at the city’s Consumer Electronics Show earlier this month. Developed by Chicago-based Cityzenith and Las Vegas-based Terbine, the model encompasses a 2.7-square-mile portion of downtown Las Vegas and is intended to “help Las Vegas building owners transition to net-zero carbon emissions.”

The digital replica of the physical landscape was built using local city data. In the future, the developers report that they see the model as an opportunity to accurately measure and design for the impacts of future plans on the city’s air quality, mobility, water management and building emissions. 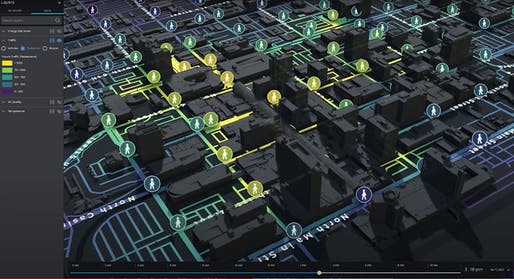 With the base model now completed, the next phase will involve input from stakeholders including real estate owners, government agencies, university researchers, data partners, architects and casino operators, overlaying further detail on how the city is operated and used.

Las Vegas is the latest U.S. city modeled by Cityzenith, with digital models of Los Angeles and Phoenix also being developed by the company as part of their Clean Cities—Clean Future initiative. The concept of digital twins, where a real-life object is accurately recreated in digital space, has gained traction in sectors such as urbanism, art, car manufacturing and healthcare.