Swabs to be printed for COVID-19 testing based on successful clinical trial.

Swabs to be printed for COVID-19 testing based on successful clinical trial. 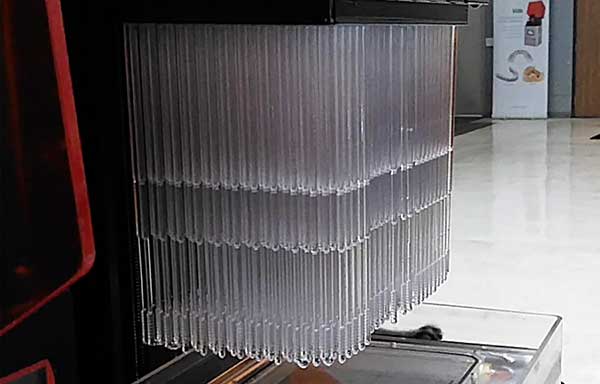 EnvisionTEC has successfully completed a clinical trial to use the EnvisionTEC 3D printed nasopharyngeal (NP) swabs for COVID-19 testing. EnvisionTEC, as well as a growing number of their Envision One cDLM customers who have also registered with the FDA to take part in this endeavor, have the mass production capabilities to produce up to a million of the swabs per day.

EnvisionTEC worked with Beth Israel Deaconess Medical Center (BIDMC) to develop a swab design and material to be printed on their Envision One cDLM 3D printer.

The Envision One is capable of producing up to 2,400 swabs in 24 hours. This leads to a production capacity of EnvisionTEC and its Envision One user network of up to a million swabs per day.

EnvisionTEC engineers have designed a collection tip for a flexible nasal swab that has completed testing in an IRB-approved clinical trial. To be given this approval, a rigorous testing procedure was required to be passed. This testing of the design and the material included several rigorous mechanical and chemical tests. This was done to ensure that the swabs pick up viral RNA particles and do not interfere with PCA/reagents, that they are chemically safe, that they would bend 180 degrees without breaking, and that the design would be able to safely collect enough virus particles from the nasal passage to effectively test.

One of the major advantages of the EnvisionTEC NP swab is that it continued to perform mechanically the same after being sterilized by steam at 270°F at 27 Pa in an autoclave. Other 3D printed swabs have shown deterioration following autoclave procedures.

“Analytical results were positive, with a high level of concordance with the reference swab and with subjective results showing that [EnvisionTEC’s] swab performed neutrally or better than other test swabs,” says Dr. Ramy Arnaout, MD, DPhil, associate director of the Clinical Microbiology Laboratories at Beth Israel Deaconess Medical Center.

E-Guide Soft, a biomedically safe 3D printing material from EnvisionTEC, and EnvisionTEC’s swab design have both passed all of the required tests. EnvisionTEC has been working with Beth Israel Deaconess Medical Center (BIDMC), which ran the trial, whose results were finalized this week.

With a network of thousands of customers eager to help, EnvisionTEC is already taking orders and producing sterilized and unsterilized NP swabs for hospitals, healthcare providers, government agencies and armed forces.

To place an order, interested parties can email [email protected].