Examine the link between generative design software and biomimicry.

Examine the link between generative design software and biomimicry.

It may be true that it has never crossed your mind to seek advice from pheromone-driven ants and light-seeking plant cells when designing an aerospace or automotive component, but if you are using generative design software to sculpt your part, you might actually be doing it already. The Airbus bionic partition, a showpiece that demonstrates how Autodesk’s generative technology was used in aerospace, achieves its weight-reduction goals by reusing the elegant patterns found in slime mold and mammal bones.

The developers behind Autodesk’s Project Dreamcatcher and Desktop Metal’s Live Parts revealed the generative algorithms in the software were inspired in part by how ants use pheromone to signal one another, and how plant cells gravitate toward sunlight for best access to nutrients. People often describe generative design’s output as “organic,” but this similarity to nature is often unintentional, the developers note.

The true link between biomimicry and generative design is how some software employs the logic found in nature to reap its benefits. Biomimicry, they argue, is less about replicating natural shapes and more about copying nature’s problem-solving methods.

From Second Life to Live Parts 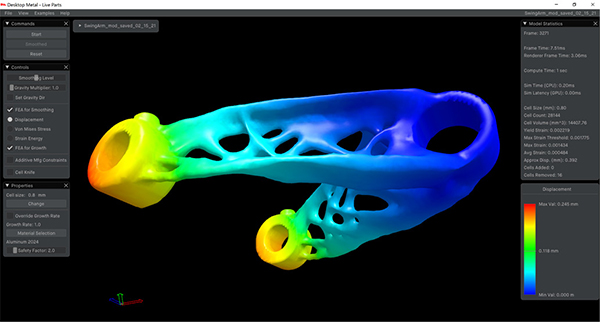 “I was looking at Second Life. And I started to think, if these virtual worlds take off, people would be buying virtual trees and cars.”

The online community Second Life has a thriving commerce system founded on the in-game currency Linden dollar. Many Second Life members with content-creation skills run virtual shops, selling everything from virtual clothes to virtual real estate to other Second Life inhabitants. To sell virtual trees, Roberts would first need to determine how to quickly generate trunks, branches and foliage.

“The way we draw things in CAD with lines and arcs is insufficient for that. That got me thinking [that] maybe we need a CAD system that grows materials where needed, similar to the way nature grows organisms,” he says. “That was the genesis of Live Parts.”

The growth model is ideal for additive manufacturing (AM) as 3D printers produce shapes by depositing materials. But what type of simple, elegant self-directed growth logic would satisfy the purpose of engineers working with shapes to counteract stress loads?

“I looked at how plant cells respond to external stimuli, like chemicals from light. So I have cells in Live Parts reacting to stress and strains, then spawning additional cells, called child cells,” says Roberts.

Nature’s construction materials are highly adaptable, whereas man-made materials are not. Steel is consistently dense; ceramic is brittle and plastic is elastic. Parts made of these exhibit the source materials’ attributes throughout their entirety. On the other hand, many natural objects exhibit adaptive density, elasticity and brittleness in different regions for multiple purposes (think of the mix of muscles, veins and bones).

“Nature’s materials are continuously changing in elasticity, density and brittleness. In the future, there will be lots of interest in materials with microlevel transformation,” says Roberts.

Desktop Metal had been concentrating on metal-based 3D printing but early this year, it signaled a change. In February, in a $300 million cash-and-stock transaction, the company completed the acquisition of EnvisionTEC, which produces 3D printers that use photopolymers, ceramics and other materials.

“The company is a pioneer in digital biofabrication additive manufacturing with its Bioplotter platform, which supports the production of biocompatible parts for medical applications such as bone regeneration, cartilage regeneration, soft tissue fabrication, drug release and organ printing,” according to the acquisition announcement.

The Lunch that Launched the Dreamcatcher

In the case of Autodesk, ideas in generative design were inspired by a bottoms-up approach in biomimicry. It came from “the termite nests, and the way the termites use pheromones to signal one another,” says Santhanam. In the software, “we create stress or pheromone gradients. The core approach is quite simple, but the results are complex.” 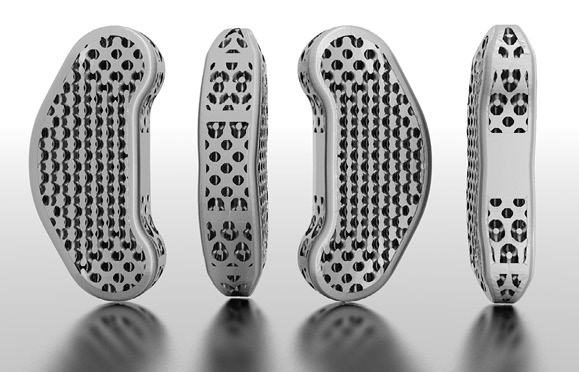 With such nature-inspired logics at the heart of their generative algorithms, generative design programs are bound to produce organic shapes from time to time, marked by asymmetry and complex surfaces. But the current manufacturing methods are no match for mother nature’s factory, perfected over long stretches of time.

“In many cases we are dealing with much simpler manufacturing processes. We cannot completely replicate the complex biological systems,” says Santhanam.

However, there’s one aspect of nature that software developers have gotten better at replicating—its multiphysics behaviors.

“Look at the human body. We can have a single component that facilitates fluid flows as well as structural outcomes,” says Santhanam. “There are similar activities in aerospace. For example, engines that combine fluid flow and structural function. But this is not quite mainstream in generative design yet.”

Santhanam also revealed his team has worked on frame-generating systems that could potentially be targeted for commercial release in the future. “It has some biomimicking elements,” he says.

Bradley Rothenberg, CEO of nTopology (nTop), often uses images of bird bones in his presentations but he hesitates to describe generative design as biomimicry.

“When I saw bird bones, I didn’t say, ‘I’m going to write an algorithm to topologically mimic this structure.’ My first thought was, ‘How am I going to represent that in 3D?’ That’s what got nTop started,” he explains.

CAD modeling programs in general use BREP (boundary representation) to depict parts destined for production. But the method is not easily adaptable to organic shapes (such as human and animal physiognomy). For these, 3D modelers usually turn to mesh- and polygon-based software. The two methods don’t blend well, which is why character animators won’t typically use CAD programs to do their job. Mesh models, too, have a limit. With complex shapes, the file size dramatically increases, causing challenges in loading and editing.

“nTop is based on implicit modeling. How we represent 3D shapes, in some cases, is thousands of times faster and lighter than a CAD file, and the complexity doesn’t break the system,” says Rothenberg.

In its product description online, the company writes, “There are no ‘black boxes.’ nTopology gives you complete control over every aspect of your generative workflows, optimization processes and their outputs. Create reusable workflows that are tailored to the unique requirements of your application. Control designs at every point in space using simulation results, test data, engineering formulas and field-driven design.”

George de Mestral, the inventor of Velcro, was inspired by the cockleburs that clung to him and his dogs after taking a walk. (“A Mind-Blowing Biomimicry Example,” July 2020, www.velcro.com). He borrowed the hook system found in the burs to create the Velcro’s sticking mechanism for nonplanar surfaces. This is a case where biomimicry reaps the benefit by replicating the shape found in nature, but shape-based biomimicry doesn’t always produce the best outcome, experts caution.

“Duplicating natural shapes is the low-hanging fruit, if it has more to do with capturing the aesthetics and less with the benefits and functions of the system itself,” says Santhanam. A better approach, he suggests, is “to look at the underlying foundational mechanism that drives the creation of the biological system.”

“Bird bones make sense in a bird that flaps its wings and flies. But if I want to build a chair, that’s not a useful structure. It’s all about solving an engineering problem,” says Rothenberg.