Find Out Latest Updates With Theorem-XR

Building on our continuing support for Microsoft’s Azure Remote Rendering (ARR), this release enables other device users (such as HTC Vive, Oculus Rift, Magic Leap, Oculus Quest, or Android and IOS devices) to access the same large datasets as HoloLens 2 users as full collaboration is now supported in ARR, and can be used across the company's range of applications.

Theorem-XR already supports many native 3D data formats such as CATIA V5, 3DEXPERIENCE, NX and Creo, Scanned data, ISO/ANSI standard data like STEP and JT, lightweight visualization formats such as 3D XML and Creo View, and neutral formats such as FBX and glTF.

The Q1 2022 release adds support for several AEC systems, including REVIT, IFC and Navisworks. For those designing large-scale factory layouts or construction projects it is now easier to be able to navigate and review data at full scale and in context, the company reports.

Previously, Theorem-XR use case based experiences for Visualization, Design Review, Factory Layout and Training would require WiFi access to run. But there are situations where people want to take data to a location that doesn’t have network access. Users can now view these datasets away from their network by caching the license—taking a license from their server for a period of time (a fixed duration of 7 days from checkout) and tying it to their augmented reality (AR), mixed reality (MR) or virtual reality (VR) device to use their experiences anywhere.

The Visualization Pipeline enables users to take source 3D data and create 3D content in a fully automated process for use in XR experiences. The pipeline automatically tessellates the data and prepares it for XR. As well as processing (part files) geometry it retains product structure and metadata, including animation data.

Search functionality has been included on the server homepage.

Users also now have the ability to archive or disable projects, and to only see projects that are relevant to them.

Theorem-XR enables ability to visualize your 3D CAD and PLM assets in context and at full scale, using AR/MR/VR technologies on the device of your choice. Theorem-XR is data and device neutral, and offers a range of use case based experiences.

With Theorem-XR, experiences are underpinned by the Visualization Pipeline, which provides a fully automated process that takes 3D data assets directly into Theorem-XR, or for the creation of Unity or Unreal assets for use in internally developed XR solutions. 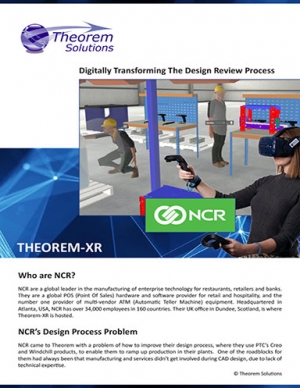 Digitally Transforming the Design Review Process
In only a short time, ATM manufacturer NCR (National Cash Registers) have revolutionized their design review and prototyping processes with the help of Theorem-XR.
3D PDF - Making your CAD Data Portable
Published interactive 3D data contained within a 3D PDF file can be shared, viewed and interrogated using the freely available Adobe Acrobat Reader by users and departments who do not have access to native CAD data, but who need a ...
Augmented, Mixed or Virtual Reality
The adoption of extended reality (XR) technology in engineering and manufacturing is accelerating at a rapid pace. But what is XR and what are its benefits? Theorem Solutions explains.
Editor’s Picks: July 21-27, 2022
One of the picks will be chosen as DE’s Editor’s Pick of the Week.
Theorem-XR Q2 2022 Release Boosts XR Capabilities
Company says the new release enables users to "explore the future of 3D visualization."
AR, MR or VR: Which Technology is Right for your Engineering Use Case?
Augmented, Mixed or Virtual Reality? This is a key question. You will need to understand the features and benefits of each technology type before looking to build and implement your XR strategy.
Theorem Solutions Company Profile