Getting Comfortable with AI-Assisted Design 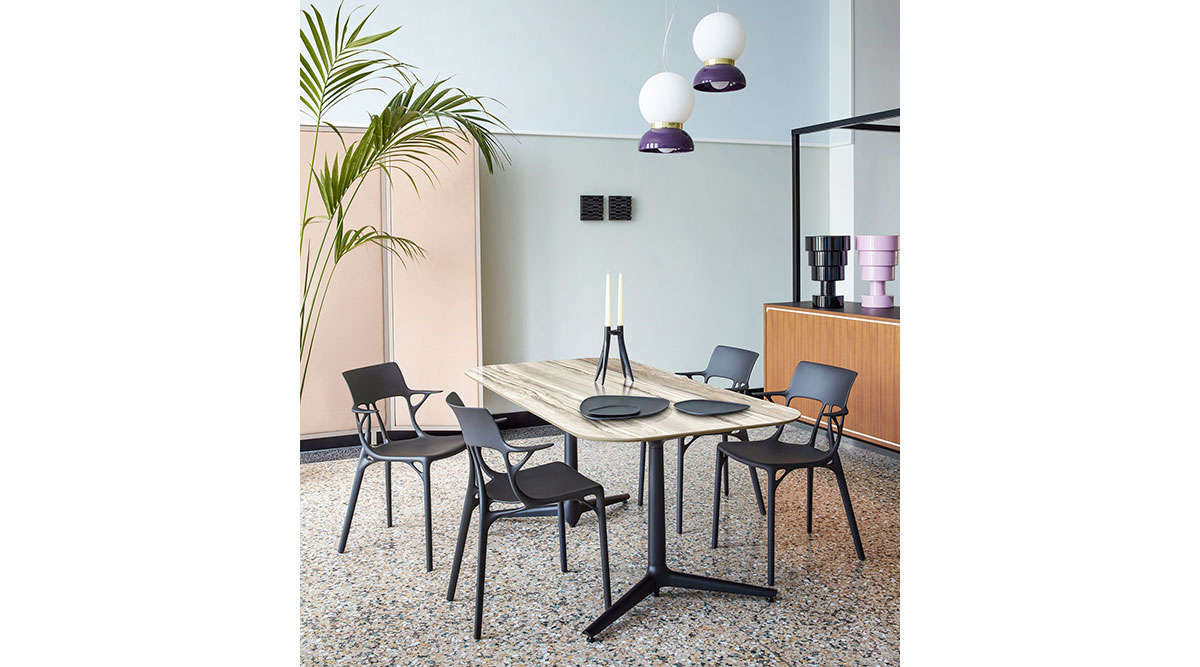 According to Starck, the project team “asked A.I.  a question: Can you carry our body with the least amount of material possible?’ A.I., without culture, without memory, without influence, replied simply with intelligence. It’s ‘artificial’ intelligence.”

Dubbed the A.I. Chair, the product was first unveiled at Salone del Mobile in Milan in 2019. At online retailers such as Connox, Lumens, and Smart Furniture, various versions of the chair are selling for roughly $250-$600. The chairs are made with 100% recycled material by Kartell, the first of such projects for the furniture maker, as recounted by Starck. 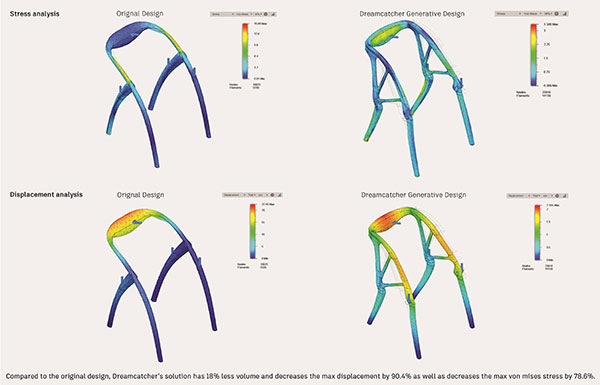 The Starck A.I. Chair has a predecessor. It’s the Elbo Chair, the outcome of an Autodesk experiment to create a chair using generative design in 2016. Back then, what would later become commercially available in Autodesk Fusion 360, was still an experimental technology, dubbed Dreamcatcher.

“Compared to the original design, Dreamcatcher’s solution has 18% less volume and decreases the max displacement by 90.4% as well as decreases the max von mises stress by 78.6%,” noted Autodesk in a published blog post.

As shown in this project, generative design is one of the ways to identify weight reduction opportunities in products. Using the same technology, Schaefer, part of Airbus’s Emerging Technologies and Concepts group in Germany, would later design an airplane partition for the Airbus A320 cabin. The outcome was 40% lighter than traditional airbus partitions, according to Autodesk.

Carmaker GM has also used Autodesk’s generative design and additive manufacturing (AM) to reshape a typical seat bracket for securing the seatbelt. “While the typical seat bracket is a boxy part consisting of eight pieces welded together, the software came up with more than 150 alternative designs that look more like a metallic object from outer space. Made of one stainless-steel piece instead of eight, the design GM chose is 40 percent lighter and 20 percent stronger than its previous seat bracket,” recorded Autodesk.

The software prototype used by Starck includes tools still under incubation with the Autodesk Research team. It was also “the first time that injection molding was designated as a manufacturing constraint in Autodesk generative design technology,” Starck wrote.

The ability to specify a desired manufacturing method (injection molding, machining, 3D printing, etc.) as a requirement was a major step in increasing adoption of generative design. Without this, many engineers found the software-recommended geometry impossible or impractical to produce.

By now, most mainstream CAD and simulation software developers have integrated generative design into their offerings, though the technology might be called something else. SolidWorks, part of Dassault Systemes, integrates it as Topology Study beginning in SolidWorks 2018. Siemens’ version appears as Convergent Modeling in its NX design suite. PTC acquired the generative design startup Frutum, with the aim to integrate it into its Creo modeling and simulation products. Altair offers its own in solidThinking Inspire software.

In generative design, the software considers various user inputs—such as material attributes, stress loads, the desired safety factor, weight reduction targets, and more—and generates the optimal geometry possible. To identify where more structural muscle is necessary, and where less material is needed, the software runs classic finite element analysis on the geometry for each configuration. The iterative process is compute-intensive, often tying up the available CPU cores for the entire process.

Generative Design and the GPU

Many of the generative design software benefits from GPU acceleration. “The analysis required for generative design is extremely computationally intensive, frequently requiring hours or even days to compute with traditional CPU computing methods. PTC’s technology overcomes this barrier by shifting the computation load to the GPU,” wrote NVIDIA in its blog post titled “Generative by Design: How NVIDIA Quadro Is Transforming the Design Process for Engineers,” June 2019.

In Autodesk Fusion 360, the integrated CAD/CAM/CAE suite, generative design is powered by a GPU-accelerated cloud infrastructure in AWS, as stated here. With this setup, “users can run hundreds of simulations in hours, instead of requiring days or weeks,” according to Autodesk.

At the NVIDIA GPU Technology Conference 2018, Jerran Schmidt, Principal Engineering, Autodesk, and Chris Hebert, Dev Tech, NVIDIA, co-presented a talk titled “Accelerating Generative Design by Leveraging GPUs on the Cloud.” The presenters showed how “the solver benefits from executing on the GPU over our CPU implementation and why this is important from both a costing and efficiency standpoint.”