A team from Michigan Tech has demonstrated the financial viability of printing large items from scrap plastic.

A team from Michigan Tech has demonstrated the financial viability of printing large items from scrap plastic. 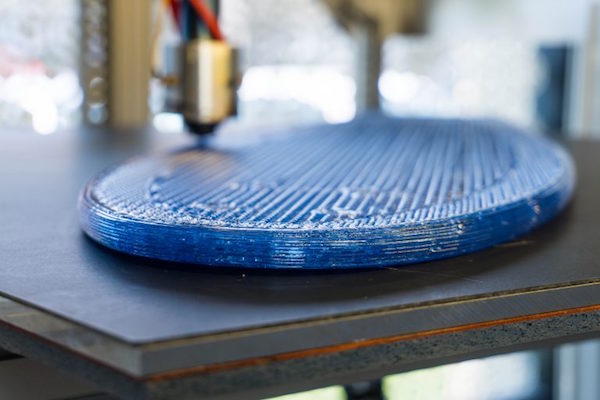 Researchers at Michigan Tech are able to print items like this skateboard deck directly from recycled plastic waste. Image courtesy of re:3D.

According to the research, makerspaces, libraries, schools and other users can create products with a high return on investment (in some cases, as much as 1,000%) with recyclable feedstock.

Joshua Pearce, Richard Witte Endowed Professor of Materials Science and Engineering and a professor in the Department of Electrical and Computer Engineering, says that the research was directed at trying to reduce the cost of operating the 3D printers.

“These printers are much larger than a normal desktop printer, and users burn through plastic like crazy,” Pearce says. “We were prototyping a toilet seat for digitally manufacturing toilets in developing countries, and I was burning through $50 worth of plastic per prototype. It’s not sustainable.”

The new printing solution is based on a previous collaboration between the Michigan Tech Open Sustainability Technology Lab (MOST) and re:3D, the recyclebot, which makes plastic filament out of recycled plastics. What the new printer does is eliminate a step in the process. Melting and extruding plastics over and over again can weaken their physical properties. Pearce says most plastics can withstand five cycles. The Gigabot X can print directly from waste plastic via FPF, which eliminates one of those melt cycles and increases the material’s usability.

“The recyclebot turns waste plastic into filament, and that system works fine, but you have to melt the plastic twice to make an object and that affects the material’s properties,” Pearce says. “We wanted to combine those ideas so that you could print directly from pellets or waste. We started basically throwing junk into the printer and it was amazingly effective.”

Previous research had shown that it was possible to print with waste plastic. The current research proves out the financial case for doing so.

The printers include a screw that pushes shredded plastic into two different “hot zones.” Pearce says the first zone melts the plastic and makes it more uniform, while the second zone compresses it and pushes it through a larger nozzle. While the printers are not capable of high-resolution printing of small objects, the process is perfectly suitable for mass manufacturing of larger plastic items.

For the current study, the team created a skateboard deck, a kayak paddle and snowshoes, and then compared the cost of the printed items with the production cost of available products, printed products that use commercial filaments or pellets, and prints using recycled plastic.

The kayak paddle (which included a metal pipe) was comparable in cost to the least expensive commercial paddles. The skateboard deck and snowshoes had a much lower cost of production than other products. In large-scale production, the printers could potentially pay for themselves fairly quickly using waste plastic as feedstock.

Pearce says the printer can use any type of thermal polymer, including PLA, ABS, ASA, polypropylene and other materials. They were also able to print using polycarbonate, although that material required some modification to the printer because of the higher melting temperature.

The team initially tested plastic pellets, then moved on to shredded plastic as well as old 3D prints. “The material just has to be small enough to fit into the hopper and make it to the screw,” Pearce says. “As long as the material is flowing, it prints just fine.”

“We’ve also been trying different compounds, including printing with more than one material at the same time,” Pearce says. “Those are more challenging, but we really haven’t hit a stop yet. The recyclebots are very aggressive machines, and when we tested those, we were able to put metal and sand—just about everything—through them. The Gigabot X is a much more expensive machine, so we’re more careful about what we’re feeding into it.”

They key is to know the origination of the material and how “processed” it is. “Everyone knows that the more you beat up on plastics, the weaker they get,” Pearce says. “After you print with this material five times, you see mechanical degradation. In our case, most of what we’re doing is recycling our own material, or buying pre-shredded plastic at a dollar per kilogram.”

Pearce says the only limitations to the system so far are resolution (because of the nozzle size) and the fact that, when printing very large objects, the system has to be enclosed in some way. “Otherwise just the drafts from walking in and of doors can cause splitting in the print,” he says.

He says the team is looking at glass composites that can reduce stress in these larger builds. “That would be a way of combining two materials to get a printable material that is better than either one of them by themselves,” Pearce says.

Next up for the team, Pearce says there are plans to test other types of materials and larger builds. “We’ve tested many polymers, but there are a lot more out there. As this type of printer catches on and can be used more often, we’ll see a lot more large, open-source printable deigns. Right now the vast majority of stuff we’re printing would fit inside a basketball, but we can go bigger than that,” Pearce says. “You can print furniture or entire leg prostheses. What this machine does is allow you print large things and if you are using recycled plastic, you can do that affordably.”

The current research was published in the Additive Manufacturing research journal.

You can learn more about the work on Gigabot X here and here.