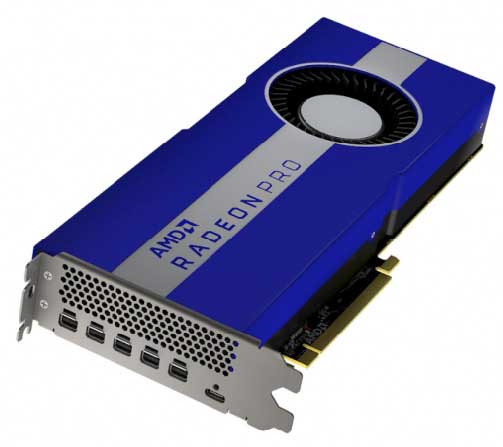 All GPUs come with the equivalent of a CPU on the board to manage the graphics processing. The AMD Radeon Pro W5700 uses AMD’s 7nm circuit etching technology. Image courtesy of AMD.

There has been a shift in recent years regarding performance expectations inside engineering workstations. For many years, the capabilities of the central processing unit (CPU) were the primary consideration. Then, in order of descending importance, there was RAM, storage and finally the graphics processing unit (GPU).

In 2020, the order has flipped. GPU performance has been on the exponential growth equivalent of a rocket ride. The other components are still important, but by comparison they are commodities within the typical engineering workstation, and not the premium anchor component of the system’s value.

The value shift is summarized as going from throwing graphics on the screen to calculating the design and engineering issues behind the objects. 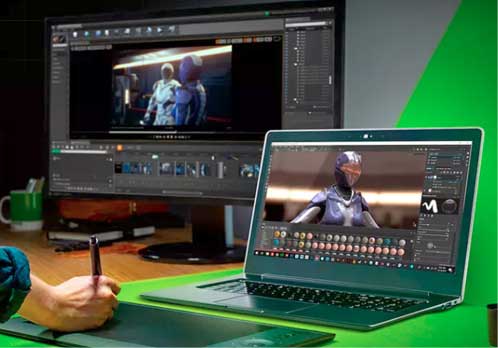 “The GPU is constantly evolving, and not just for gaming, but constantly being refined to provide much more than conventional raster-based 3D graphics for product design, with emerging innovations notable in uses from rendering to simulation to machine learning,” notes Alex Herrera, senior graphics industry hardware analyst with Jon Peddie Research (JPR).

This is not an apex moment, Herrera adds. “Expect your GPU to increasingly be tasked with supporting machine learning, whether as a task the designer might explicitly invoke, like generative design, or [while] the application runs in the background, like sanity-checking design rules.”

The first is graphics fidelity for increased rendering speed and improved visualization. “A set of images that once took months to render with complete fidelity and no noise can now be created in weeks or days,” Hillner says. 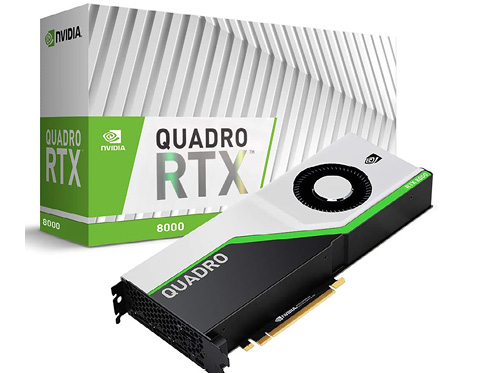 The second is parallel processing, also known as the ability to simultaneously calculate multiple computations. Simulation and analysis tools are the big winners here. “Doing the same math over and over is perfect for GPUs,” says Hillner. Depending on the physical process being analyzed, GPUs can offload some or most of the computation. Most CAE vendors are now either converting their solvers to run primarily on GPUs, or adding that capability to their CPU-based products.

The third is the application of artificial intelligence called design guidance. “Instead of sketching what might be the right shape, use AI and crush all the possible scenarios on the GPU,” says Hillner. A variety of software products now use generative design or other AI-enhanced methods to bring the “what if” CAE experience into design.

The annual sales cycle for GPU hardware generally has a lull in Q2 of the year. But this year COVID-19 changed things. There was a significant increase in demand for better work-from-home products, including engineering workstations. GPU sales overall—both by themselves and as sold within a workstation—rose in the quarter.

“The pandemic has been disruptive and had varying effects on the market,” notes Jon Peddie, JPR president. “We believe the stay-at-home orders have continued to increase demand in spite of the record-setting unemployment levels.”

Analysts break the workstation market into three distinct segments: entry level, mid-level and high-end, for desktop and mobile computers. For workstation vendors, the market is more nuanced. Which GPU engineers should select for any particular workstation model is never taken for granted.

Once the workstation user moves beyond using only one CAD package (2D or 3D), things get interesting. “It is interesting to see workloads evolve from being CPU-only to whole-heartedly embracing the GPU for compute,” notes Ramirez. He uses the popular engineering rendering/visualization software KeyShot as an example. “KeyShot went from being completely CPU dependent to being able to leverage the GPU. [As a result] we are seeing demand for KeyShot skyrocket.”

Some engineering workflows still use software tools that have minimal reliance on GPUs, such as 2D CAD. Dell, for example, uses three vendors for workstation graphics. The Intel ultra-high definition (UHD) 630 graphics subsystem is offered for entry-level users on mobile and deskside workstations. Mid-range and high-end users can select between various AMD and NVIDIA models, starting with the AMD Radeon Pro WX3200 or the NVIDIA Quadro P620 as base models, and working up into the high-end products from each vendor. 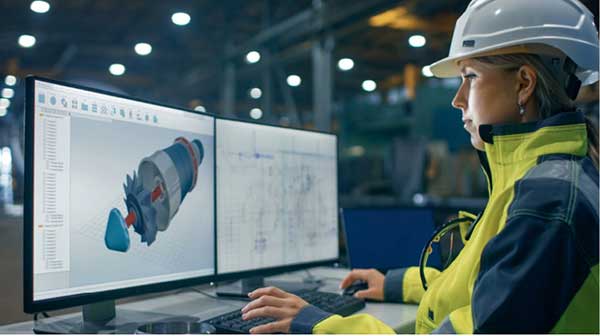 NVIDIA makes desktop and mobile versions of its RTX line of GPUs. Image courtesy of NVIDIA.

For each vendor, models are listed in order of feature set from high to low and current generation technology before previous generation. GPUs primarily marketed to the gaming community are not included.

AMD sees the market for its GPUs as a combination of performance and power requirements. The better the performance, the higher the power requirements. If a company buys a thousand workstations, and there is a choice between a GPU that runs at 200W and another at 300w, there will be a considerable total cost of operations (TCO) difference.

“Is power consumption really that important?” asks Scott Jackson, who runs the workstation product team at AMD. “Larger enterprises tell us, when they multiply the savings across thousands of systems, they see real benefit.” That benefit might be longer battery life on a mobile workstation, or TCO on workstations in the office.

Companies who need top GPU performance have to de-prioritize power consumption. “The higher end of the market wants the cutting-edge features, which then waterfall to the rest of the market over time,” Jackson says, an action typical of technology democratization.

The AMD Radeon Pro VII GPU, for example, includes Infinity Fabric Link, a high-bandwidth low-latency direct connection between two Radeon Pro units for much higher throughput than can be achieved using the PCIe connectivity available in the workstation. The Infinity Fabric Link was invented by the AMD team working on supercomputer technology, then currently moved to the high-end GPU.

Building the GPU board is more than just serving the workstation market, Jackson notes. There is a complete software stack to take into consideration as well. “We are seeing increased use of our remoting software; there is a shift because of the pandemic. Video conferencing will become more comfortable, which means improvements in GPU video encoding and decoding is important.”

NVIDIA is the heavyweight in the GPU industry. JPR says NVIDIA market share in the second quarter of 2020 was 78%, with AMD and Intel dividing up the rest.

Total GPU sales were up 36% from Q2 of 2019, a jump JPR attributes to two factors: increased interest in artificial intelligence (AI) and neural nets; and a rise in workstations purchased for work-from-home setups.

NVIDIA also sees the mission as more than building a graphics engine, and offers software and services to complement their hardware. Major GPU technology advancements introduced by NVIDIA in the last two years are real-time ray tracing and tensor cores, which are processors within the GPU that specialize in matrix mathematics.

“You can’t just toss hardware out there and start taking market share,” says NVIDIA’s Allen Bourgoyne, a senior product marketing manager. “Our boards are now more than graphics accelerators; we have built a complex ecosystem of hardware, software and third-party developers.”

The days of “one app, one workstation” are gone, Bourgoyne says. “We have to hit a range of technologies” with a single GPU. “Five years ago, no one was doing AI except in a lab on a server in a dedicated research environment. Today, many companies have neural nets at work, even if they don’t know it.”

Intel is the undisputed champion of CPUs, but it is an also-ran in graphics. Its current offering, Intel UHD graphics, is embedded into selected CPUs and only used in entry-level workstations as well as consumer and enterprise products.

In 2018, Intel announced a new initiative to create next-generation graphics processors, project Xe. To date, Intel has four Xe products in various stages of development. Xe LP is similar to UHD, an integrated graphics solution. Xe HP is for high-end compute and data center workloads. Xe high-performance computing (HPC) is an extended version of Xe LP for supercomputing applications. Xe HPG is a variation that includes ray tracing and removes tensor cores. The HP and HPC offerings are probably the models Intel will pitch to engineering workstation manufacturers.

The Xe initiative received a big boost when Intel hired former senior AMD executive Raja Koduri. Many industry watchers who know Intel’s past lack of market dominance in graphics are giving Koduri the benefit of the doubt and taking a wait-and-see attitude about these new subsystems. Nothing in the Xe line will be on the market until sometime in 2021.

Intel declined an interview invitation for this article. The representatives of AMD and NVIDIA interviewed for this article did not want to comment specifically on Intel’s place in the market. It is safe to summarize that both companies believe Intel’s past performance is not necessarily a predictor of the future; Intel could become a formidable competitor in engineering graphics in the near future.

A growing part of the GPU market is embedded systems graphics. A new player is Cincoze, an established manufacturer of embedded compute systems who is now adding GPU compute capabilities to their line.

Their new GM-1000 is a ruggedized embedded processor designed for Internet of Things-type compute environments. There is no indication from either the manufacturer or the analyst community that Cincoze will be a player in workstation graphics in the near future.