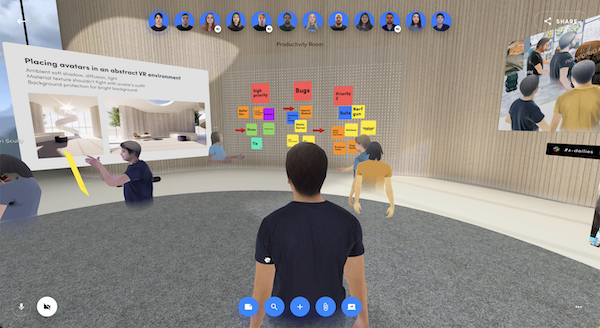 Spatial mobile apps stand out as an alternative to video conference. Image courtesy of Spatial.

XR Brings Greater Clarity to Automotive Design
While the technology is still evolving, it also offers a lot of possibilities to automakers.
Bridge the Gap Between Digital and Physical by Using XR for...
Using Extended Reality (XR) is helping to bridge the gap between the digital and physical...
AR, MR or VR: Which Technology is Right for your Engineering...
Augmented, Mixed or Virtual Reality? This is a key question. You will need to understand...
Bricsys Teams Up With VREX to Accelerate Virtual Reality Workflow
Companies on a mission to boost to VR workflow.
More Virtual Reality

Headlines about AR/VR (augmented reality, virtual reality) deployment in engineering tend to be mainly about automotive and aerospace manufacturers adopting high-end, high-resolution, professional grade headsets—for good reason. The photorealistic visuals, hand-tracking features, and futuristic headgear are irresistible. But in real-world deployment, even in enterprise settings, the applications using existing mobile devices, such as smartphones and tablets, may be making much greater progress.

For The Glimpse Group, an AR/VR software and services provider with 11 subsidiaries, mobile applications are a large part of its strategy and vision. According to Lyron Bentovim, the company’s President & CEO, “About half of our business is in headsets (mostly VR) and about half is on mobile AR/VR.”

Mobile usage thrives in “industries where the employees are not using their hands for their job while using the AR applications, most situations where the use case relates to sales, marketing, and learning,” he noted.

For judging the surface finish of a new car model or learning to install a complex machine in virtual reality, raytraced visuals, eye-tracking tools, and hand-tracking functions found in high-end headsets like Varjo XR and HoloLens 2 are critical. But for simpler use cases like superimposing a digital prototype onto a live video feed or configuring a customizable product, leveraging the mobile devices already in circulation might be the answer.

In this article, we look at the potentials of mobile AR/VR for professional engineering work.

Sizing Up the Mobile AR/VR Market

In the report titled “Mobile Augmented Reality (MAR): Global Market Trajectory & Analytics” from Research and Markets, the authors estimated the global MAR market to be at US$10.7 Billion in the year 2020. “[It] is projected to reach a revised size of US$230.6 Billion by 2027, growing at a CAGR of 55% over the analysis period 2020-2027,” they said.

A large part of the growth would come from education, according to the report. “USA, Canada, Japan, China, and Europe will drive the 43.8% CAGR estimated for this segment. These regional markets accounting for a combined market size of US$1.2 Billion in the year 2020 will reach a projected size of US$15.7 Billion by the close of the analysis period,” the authors estimated.

Addison Snell, CEO of the analyst firm Intersect360 Research, observed, “Tablets have gotten pretty powerful, and I think people will be amazed at how much device-driven AR can do.” He pointed out, “While it’s not as immersive as a full headset experience, having an AR-capable app on a phone or tablet is incredibly powerful in terms of putting enhanced capabilities in more people’s hands. Ultimately, as AR catches on, it could drive more headset adoption where the immersive experience is required.” 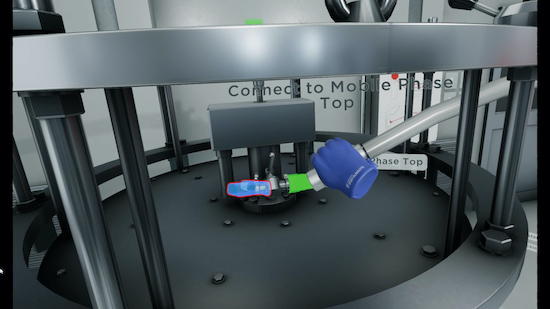 Six months into the U.S. pandemic shutdown, The Wall Street Journal’s tech reporter Joanna Stern wrote, “You can go back to the office—You just need a virtual reality headset.” (September 28, 2020, www.wsj.com). She was referring to the Spatial AR/VR software for hosting and running virtual meetings. With people beginning to recognize Zoom fatigue, meeting in VR seemed like a good alternative. To some extent, it could recreate the experience of the watercooler and breakroom conversations in the office.

The company’s app supports a range of headsets, including Hololens, Oculus Quest, and Nreal. In the app’s virtual environment, users are represented by reasonably lifelike avatars, generated from uploaded 2D photos. Toymaker Mattel uses it for collaborative product development and design discussions. But the company soon realized, access to VR/AR headsets still remained a barrier for many home-based workers.

Last December, Spatial launched a free native AR app for iOS and Android devices. Anand Agarawala, Cofounder and CEO of Spatial, said, “Previously only people with a headset could experience the true magic of Spatial but we wanted anyone to be able to take advantage of it. Now, you simply hold up your phone and for the first time ever can become an active part of any virtual meeting and see lifelike avatars of coworkers or friends right in your living room.”

In the headset version, the user’s movement offers changes in perspective. Similarly, in the mobile version, moving the device (for example, a smartphone) allows the user to inspect virtual objects from different angles. 3D models can be uploaded to Spatial environment as OBJ, glTF, GLB, FBX, DAE, and PLY files. In addition to the free version, Spatial also offers Pro, Team, and Enterprise licenses under subscription.

One of the earliest CAD viewers to incorporate AR/VR functions was eDrawings. The small installation footprint and rich feature sets make it an ideal program to view, measure, annotate, and dissect 3D CAD (parts and assemblies) in DXF or DWG files. With the use of a marker, eDrawings Professional allows you to position a digital object in the real world for fit and form assessments. Though the product is closely associated with SOLIDWORKS CAD software, it supports formats authored in competing products, such as Autodesk Inventor, CATIA, Siemens NX, PTC Creo, and SketchUp.

“A one-to-one true scale perspective possible in VR is not something you can get with the desktop app. That’s a new way to inspect and interrogate 3D assets. You get a better understanding of how some components may need to be accessed [in maintenance and repair],” he explained. (For more, read “Redesigning CAD for Mixed Reality,” February 2020.)

Breaking down the pros and cons of mobile AR/VR, Lyron said, “The pros are, everyone has them, they’re easy to operate, there’s no need to educate users, they have a clear field of view (fully augmented within the screen), many have advanced Lidar technology, and it’s easy to create apps and place them in iTunes or Google Play store. The cons are, they need to be held in your hands, and you’re not fully present.”

Mobile AR/VR won’t satisfy the workflows that require high visual fidelity and hand movements, such as automotive design review or flight simulation, but for simpler workloads, such as on-the-fly product configuration for customer and sales presentation or discussing early product concepts in 3D, the options are increasing.