It has been quite a while since we last looked at new graphics board from AMD (DE, April 2017; AMD Radeon Pro Review). Back then, the Radeon Pro WX series, based on the company’s new Polaris graphics processing unit (GPU), and we wrote about the Radeon Pro WX 4100, WX 5100 and WX 7100. However, since we only received a Radeon Pro WX 5100, that was the only one we were able to test.

AMD has long been known as a competitor to Intel in the CPU market, but the California-based company moved into graphics in a big way in 2006 when it acquired Canadian graphics card manufacturer ATI and took over the development of the ATI FirePro graphics boards. AMD continued to use the FirePro name on its professional workstation-class cards until 2016, when it introduced the Radeon Pro WX series. 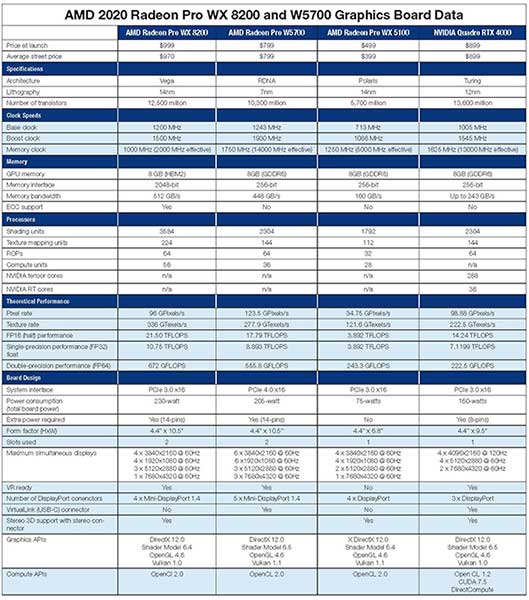 We recently received two new AMD boards, the Radeon Pro WX 8200 and the Radeon Pro W5700. The WX 8200, first introduced at the SIGGRAPH 2018 conference, represented the second high-end addition to the WX workstation graphics lineup, coming one year after the WX 9100’s release. 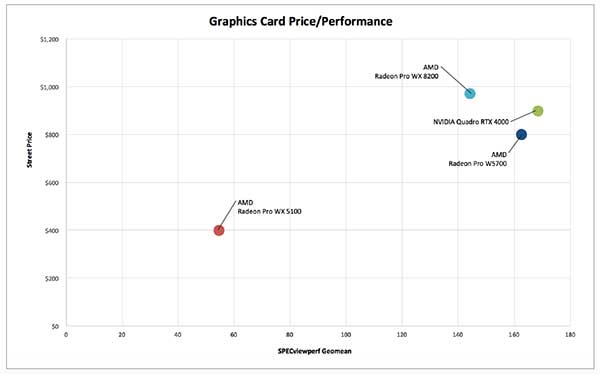 According to AMD, the RDNA architecture features a redesigned geometry engine and compute units, delivering up to 25% higher performance per clock and up to 41% higher average performance per watt than the previous generation Graphics Core Next (GCN) architecture.

The AMD Radeon Pro WX 8200 is actually quite similar to the WX 9100, with 12,500 million transistors and a base clock speed of 1200MHz. Both boards use HBM2 memory with error-correcting code support.

But while the WX 9100 came with 16GB of memory and a launch price of $1,599, the WX 8200 includes 8GB of memory and a suggested retail price of $999. Like the WX 9100, the Radeon Pro WX 8200’s thickness consumes two expansion slots and the board’s 230-watt thermal design power (TDP) requires a six- and eight-pin external power connector. You must have a workstation with a large power supply to support the WX 8200.

The WX 8200 has a 2048-bit memory interface and a memory bandwidth of 512GB/s. The board provides four mini-DisplayPorts and can support up to four simultaneous monitors at up to 3840x2160 resolution, three at 5120x2880 and one at 7680x4320, all at a 60Hz refresh rate. The board incorporates 3584 shading units, 224 texture mapping units, 64 render output units (ROPS) and 56 compute units to deliver 10.75 TFLOPs of peak single precision (FP32) and 672 GFLOPs of double-precision (FP64) floating point performance. The WX 8200 also incorporates a high-bandwidth cache controller (HBCC) that lets you work beyond the 8GB of physical memory on the graphics processing unit (GPU) by allocating a portion of the workstation’s system memory, similar to the way data pages to the hard drive when system memory becomes full.

The even newer AMD Radeon Pro W5700 also offers 8GB of onboard memory, but uses less expensive GDDR memory and lacks the HBCC controller. This board, however, is based on an even newer AMD architecture.

The W5700 delivers incredibly fast performance with 10,300 million transistors and a base clock speed of 1243MHz. The board features a 256-bit memory interface and a memory bandwidth of 448GB/second. With 2,304 shading units, 144 texture mapping units, 64 ROPS, and 36 compute units, the W5700 delivers 8.8993 TFLOPs of single-precision (FP32) performance and 555.8 GFLOPs of double-precision (FP64) floating point performance.

Although it has a slightly more modest 205-watt TDP demand, like the WX 8200, the W5700 requires a six- and eight-pin external power connector and its thickness consumes two expansion slots. But the W5700 provides five Mini DisplayPorts plus a high-speed USB-C connector that can support an additional monitor or virtual reality headset, enabling it to support up to six simultaneous displays at up to 3840x2160 resolution or up to three displays at up to 7680x4320 resolution, all at a refresh rate of 60Hz.

To see how well these new GPUs performed, we installed each in turn in the same workstation equipped with 16GB of memory, running the latest build of Windows 10 Pro, and using the latest version of the unified AMD driver. We ran version 13 of the SPECviewperf benchmarks. 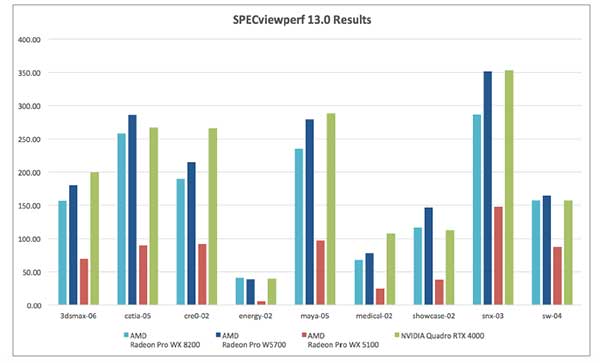 For comparison purposes, we also retested the AMD Radeon Pro WX 5100 as well as the NVIDIA Quadro RTX 4000 in this same workstation, again using the latest driver software, so that the only variable was the GPU.

As expected, the performance improvement of the WX 8200 and W5700 over the WX 5100 was quite dramatic. For double the cost of the WX 5100, the W5700 proved to be three times faster. But on average, the new W5700 was slightly faster than the more expensive WX 8200, thanks in part to its higher base clock and much higher boost clock, yielding a much higher effective memory clock than the WX 8200.

Like previous AMD boards, the WX 8200 and W5700 are fully certified with most CAD and DCC applications. The new AMD boards use the latest Radeon Pro Software Enterprise Driver, which is available for 64-bit Windows 10, Windows 7 and Linux x86, and are covered by a three-year warranty.

Choosing between these boards comes down to intended use. The high-bandwidth cache controller in the WX 8200 gives it an edge for those doing serious multi-tasking or GPU computing. Both AMD boards deliver more raw computing power than the NVIDIA Quadro RTX 4000 in theoretical performance, although the RTX 4000 turned in better results on our graphics performance benchmarks—but just barely, and for $100 more than the W5700.

The AMD W5700 has the edge in terms of future-proofing—since it is PCIe 4.0 ready, it offers 1,969MB/second per lane when matched with a motherboard and processor offering PCIe 4.0 (currently only available in AMD’s latest-generation CPUs). As AMD continues to go head to head with NVIDIA, it’s the customers who reap the rewards in improved performance and competitive prices.