Planning for 5G in Omniverse 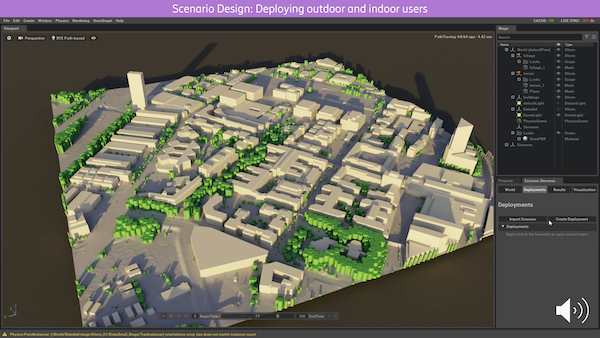 When Jensen Huang, CEO of NVIDIA, announced the Omniverse at GTC 2019 two years ago, he described it as “an open collaboration tool” based on the Pixar-developed USD (Universal Scene Description) language, giving the impression it was merely a 3D modeling environment that accommodates many different file types. If that was NVIDIA’s original vision, the product has evolved into something much more. With an embedded physics engine (powered by NVIDIA PhysX) and ray traced 3D graphics (running on NVIDIA RTX), Omniverse is now a world-creation and true-to-reality simulation environment.

One early user, telecommunications giant Ericsson, has built digital twins of cities in Omniverse to plan and map out its 5G connectivity strategy. 5G will be a critical factor in the success of connected and autonomous vehicle deployments, among other applications; to design these solutions will require the ability to effectively simulate these complex environments.

The Beginning of the Partnership

Ericsson and NVIDIA entered a partnership in 2019, with plans to collaborate on “technologies that can allow communication service providers to build high-performing, efficient and completely virtualized 5G radio access networks (RAN).” At the time, Omniverse was still in its early stage, a collaboration platform to facilitate users of different 3D modeling software tools.

Ericsson noted in an online article that, “In urban deployments, the majority of mobile traffic is usually indoors, which is difficult to serve from outdoor base stations due to radio signal attenuation through walls and windows. With 5G systems, this can be even more of a challenge due to the use of ultra-high frequency bands.”

An accurate 3D city model with rich details (such as bridges, tunnels, and urban foliage) would allow the telecom provider to simulate, analyze, and refine its strategies for radio frequency propagation. This turns out to be a role Omniverse is well-positioned to fill.

Presenting the 5G simulation project at GTC 2021, German Ceballos, an Ericsson researcher, said, “Ideally, we would like to simulate the use cases, mimicking real life scenarios. So we set up environments with models, meshes, materials, and even textures” (“Leveraging Omniverse for Rich 5G Simulations” )

The three phases of the project are scenario design, simulation, and result visualization. The telecom firm relied on in-house Ericsson technologies, Python, and Google Earth data, not all connected together, Ceballos revealed. “Our ultimate vision is to have an integrated simulation and visualization environment that relies on the same backend technology,” he added.

The rich 3D models and simulation exercises allowed Ericsson engineers to identify obstructions and figure out how to deploy in multi-story buildings for best coverage, among others. The 3D setting also allowed users to drag the avatar of a user along a path to see potential reception, coverage, and obstructions along the way in real time.

“It’s really changing the way we show the results and understand the results. It’s possible only because of the tight integration between simulation and visualization,” said Ceballos.

NVIDIA describes Omniverse as “cloud native and multi-GPU-enabled.” Its 3D rendering power comes from NVIDIA RTX Technology, allowing photorealistic visuals to be streamed. In manufacturing, it’s expected to power Industry 4.0-style digital twins of product, plants and factories, connected to real-time data feed from sensor-equipped machineries and devices. The software has plug-ins that connect to Autodesk Maya, PTC Onshape, Substance Designer, Trimble SketchUp, McNeel Rhino, Epic Games Unreal Engine and other popular 3D tools. The beta code is downloadable for individuals, with enterprise subscriptions expected to be available in the near future.

“In 5G, the antenna may have many direction-programmable features and must support massive MIMO (multiple input, multiple output), enabling the spatial domain to deliver signals,” said Larry Williams, Distinguished Engineer, Ansys. “5G antennas are generally antenna arrays and are an integral part of the radio system performance. This adaptive nature demands that full systems are tested in their operational environment using OTA testing. Those testing environments can be created in simulation to speed design and make passing hardware OTA testing more likely to succeed. Working with test and measurement (T&M) allows constructing virtual testing that mimics hardware tests. Engineering organizations already understand the hardware tests and hence can make the connection between virtual and hardware testing like a digital twin.”

Ansys has a partnership with NVIDIA. Ansys HFSS and the SBR+ engines are fully high-performance computing ready for on premise clusters, Cloud, and for CPU and GPU nodes, according to Williams. “Hybrid electromagnetics solutions for high-fidelity modeling of installed antenna performance leverages coupling between the FEM and SBR+ and it is highly valuable to speed solutions by leveraging GPUs,” he said.

Williams envisions Ansys software harvesting the power of both local and cloud-hosted GPUs to compute for multiple moving reference planes for the mesh network. “As systems evolve to leverage 5G infrastructure and the 5.9 GHz V2X standards, modeling complex systems with many moving vehicles in a dense multipath environment is imperative to deliver the reliable communications for future automotive systems,” he said.

For more information, watch the 2021 Dell Omniverse presentation at SIGGRAPH.