Simulation Training for the Engineer

The Next Generation of ASML’s EUV Lithography Machines. Image courtesy of ASML.

The NAFEMS Professional Simulation Engineer (PSE) Program was launched at the Salzburg NAFEMS World Congress in 2013. PSE functions as both an educational framework for professional development and as an independent certification program. Early interest in PSE Certification was driven by the ‘super analysts’—engineers with decades of simulation experience who were looking to use it as a way to differentiate themselves from their peers. Candidates who have achieved Standard or Advanced Certification are able to claim they are ‘PSE Certified’ and allowed to use the PSE Certified logo. The number of individuals on the PSE Register has increased significantly since launch, particularly in 2015, when we saw a growth in interest from organizations looking to embed PSE within their organization. The driver for using PSE varies from organization to organization, and the purpose of this article is to show some of the different ways that PSE can be used by industry, and demonstrate the key benefits to both individuals and organizations of getting involved in this unique program.

ASML, based in The Netherlands, is one of the world’s leading manufacturers of semi-conductor chip making equipment. The guiding principal at ASML is to continue Moore’s Law towards ever smaller, cheaper, more powerful and energy efficient semiconductors. They have over 5,000 employees working in research and development.

ASML has embedded simulation throughout their engineering teams. Designers and mechanical architects use CAE on a range of tasks, from designing the vibration isolation systems used to transport the lithography systems to optimization the thermomechanical control systems used to focus the light source. The designers and architects are supported by the Mechanical Competence Team, which is comprised of experienced simulation experts. PSE has been brought into ASML with the aim of setting a new standard that will lead to greater efficiency and a higher quality of the design. This will be achieved by ensuring that the all users of simulation tools have obtained a minimum level of competence.

The Next Generation of ASML's

1. The competences being tested during the interview were not focusing on the key areas that ASML wanted to evaluate.

As a result, an ‘Entry Level+’ PSE process was created specifically to meet ASML’s needs. Analysis experts from within the Mechanical Competence Team at ASML drew up a short list of competencies from the 1500 competence statements contained within the PSE Competency Tracker. This set of competencies has become known as the ‘ASML Core Competencies’ and is essentially an ASML specific technical area.

The PSE assessors using the ‘Entry Level+’ process are asked to focus on these competencies during the certification interview. They are then required to make two recommendations following an ‘Entry Level+’ assessment:

1. Does the candidate demonstrate the core competencies required by ASML?

2. Where does the candidate map onto the PSE register according to Technical Area & Level?

The first outcome provides ASML with information that dictates if the employee is allowed access to simulation tools. The second outcome gives the ASML candidates a personal qualification, which moves with the individual if they change employer.

Levels of PSE certification, which were then used for a cirriculum at ASML.

There have of course been a number of hurdles that have had to be negotiated during this process. In the beginning there was only a trickle of applications from ASML. When ASML decided to restrict access to simulation tools to engineers who had successfully been through the ‘Entry Level+’ process, this trickle soon turned into a flood. As the number of applications increased it quickly became apparent that web-based interviews were not an efficient way to conduct large numbers of certification interviews. These have now been replaced by regular onsite assessments, where 12 certification interviews are conducted over a two-day period.

The way PSE is being used at ASML is still evolving. When the ‘Entry Level+’ process was initiated, ASML’s focus was on testing whether or not the candidates were able to demonstrate the ASML Core Competencies. While this outcome is still important, attention is now also paid to the level of PSE certification that a candidate achieves.

If an engineer is expected to perform FEA (finite element analysis) independently without supervision, they are required to achieve certification at either Standard or Advanced level.

ASML’s co-developers, who are using CAE to support the design of products that they supply, are now also required to go through the PSE ‘Entry Level+’ process.

ASML has corporate-level NAFEMS members and regularly host NAFEMS introduction to FEA training courses on site in Eindhoven. By having good communication links between the team helping to develop the competence of ASML staff, and the team responsible for checking that the competences have been obtained, problem areas can be quickly identified and addressed.

Every single competence statement found in the PSE Competency Tracker is linked to an educational reference, which will help the user develop the required competence. NAFEMS have provided ASML with an electronic publication that contains the educational references associated with the ASML Core Competencies. This book is a handy reference guide for all applicants going through the ASML ‘Entry Level+’ process

The PSE Competency Tracker is a web-based tool that provides a ready-made educational framework for simulation engineers. The Tracker allows engineers to record their professional development by checking off competencies as they are obtained, and to associate notes and comments against each competence. NAFEMS encourage anyone applying for certification to review the competencies found in the PSE Tracker, as it details the competencies that will be evaluated during a certification interview.

The technology behind the PSE Competency Tracker is developed by our partner organization EnginSoft. EnginSoft have worked with ASML to provide a customized competency tracker which contains the specific modifications required for the ASML ‘Entry Level+’ certification.

The first modification is the inclusion of an additional technical area containing the ‘ASML Core Competencies’. By clearly identifying the core competencies it makes it easy for the engineers who are being asked to participate in the ‘Entry Level +’ process to be aware of what will be covered in the assessment interview (item 1 in Fig. 6). 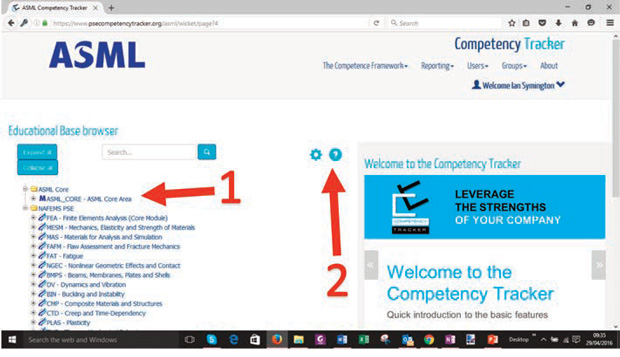 b. ASML Applicants: How to apply for PSE Certification

c. Co-developers: How to apply for PSE Certification

d. How to use the ASML Competency Tracker

The third modification is related to the educational references associated with the competence statements found in the ASML Core Competencies. The educational references associated with these competence statements are available immediately to ASML employees going through the PSE Entry Level+ process and can be viewed from within the web browser (Fig. 7). 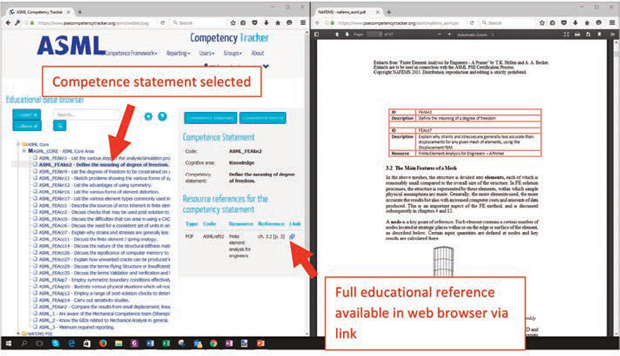 The final modification is that the outcomes of the PSE Certification interview are recorded in the customized ASML PSE Tracker. This information is only available to selected individuals within ASML. The training team at ASML uses this information to manage who is given access to engineering analysis software tools.