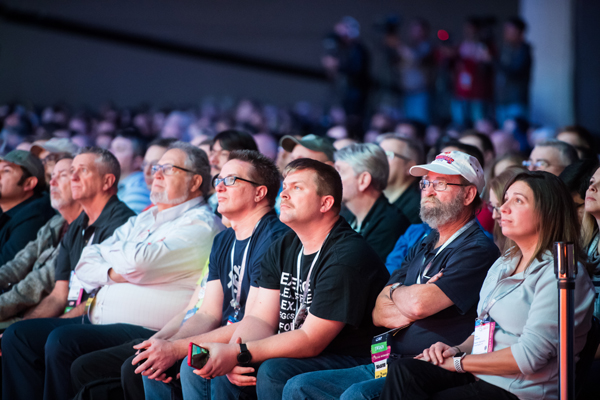 Audience at SolidWorks World 2019 on Day One. Image courtesy of Dassault Systemes.

Last week, in Dallas, TX, people wearing cowboy hats branded not with a lone star but with a 3DS logo streamed into the Kay Bailey Hutchison Convention Center. This was a sign that the annual gathering of SolidWorks users was about to kickoff.

As SolidWorks CEO Gian Paolo Bassi entered the stage, he said: “Good morning! Welcome to SolidWorks World 2019!” Next year, he won't be referring to the show by the same name. He'll be calling it 3DEXPERIENCE World 2020 (set for Nashville, TN).

The rebranding is one of the signs that change is coming to the mechanical CAD company and brand that Dassault Systèmes acquired nearly two decades ago, back in 1997. 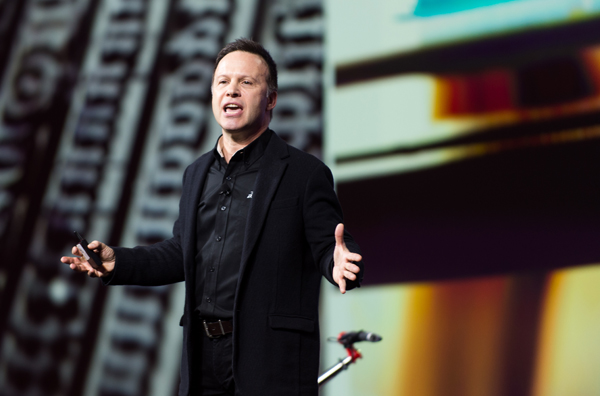 About 30 minutes into the keynote, Bassi made the first major announcement. “Platform is the new thinking. The entire world is heading in that direction. We want to offer you this amazing concentration of knowledge, technology and know-how,” he said. “We call this 3DEXPERIENCE.Works [3D Experience dot Works] ... It means 3DEXPERIENCE is coming to you.”

The new offering is presented as a bundle to Plan, Design, Simulate and Manufacture. 3DEXPERIENCE.Works is made possible in large part by Dassault Systemes' $425 million acquisition of IQMS, a firm that focuses on small and midsize firms.

“By integrating IQMS’s solutions into the 3DEXPERIENCE platform on the cloud, Dassault Systèmes will provide these manufacturers with an affordable system for operations that improves the collaboration, manufacturing efficiency and business agility needed to serve their customers successfully. The manufacturers—many of them SolidWorks users—also gain the flexibility to rapidly scale up as a business grows,” wrote IQMS when announcing the acquisition.

“The idea behind 3DEXPERIENCE.Works is to connect the SOLIDWORKS users to other products from Dassault Systèmes through the Dot-Works platform,” explained Stephen Endersby, director of product portfolio, SolidWorks.“The point is, we won't shoe-horn an Airbus-type solution into a small company's workflow. We're coming up with something that fits their needs.”

Later, Bassi presented the panel of executives who are tasked with leading the Dot-Works initiative. They are:

The assembly offers clues to how components in the Dot-Works setup might closely mirror their counterparts in parent company Dassault Systemes' portfolio.

“The use of 3DEXPERIENCE platform is going to become more important for SOLIDWORKS users,” said Endersby. “Not that everybody will need to buy everything in Dot-Works. What you buy from it will depend on your role and needs.”

The cloud-hosted xDesign, first announced in SolidWorks World 2016, now in beta, is in the hands of roughly 2,000 users, according to Endersby.

While the company has a long history in desktop CAD, SolidWorks is relatively new to browser-based CAD. In these uncharted waters, however, the established brand competes on equal grounds with newcomers like Onshape, founded by a group of former SolidWorks executives.

“[Cloud] was new to us. We needed to learn how to provision and manage online CAD,” said Endersby. “It's now very close to be a commercial solution.”

Around the 1 hour 20 minutes into the keynote, Bassi delivered the second announcement.“The next application in the x-family is called xShape,” he said, as he launched into a demonstration. “You start from SolidWorks. You can drag and drop the entire product into xShape. Pay attention to the feature tree. You see little icons marked SolidWorks. Those are native SolidWorks files. xShape will be available this summer.”

xShape is designed to produce both surfaces and solids, Endersby explained. The product is a subdivisional modeler that allows you to sculpt organic shapes and elegant curves using push-pull techniques. xShape is now poised for testing, according to Endersby.

Because the company has benefited from its experience and testing in xDesign, it doesn't expect to need just as long a testing period. Therefore, xShape could be ready for commercial delivery as early as this summer, Endersby said.

“We'll start testing it with a small number of people in Q1, add more testers in Q2, and summer is the [release] target for us,” he added. 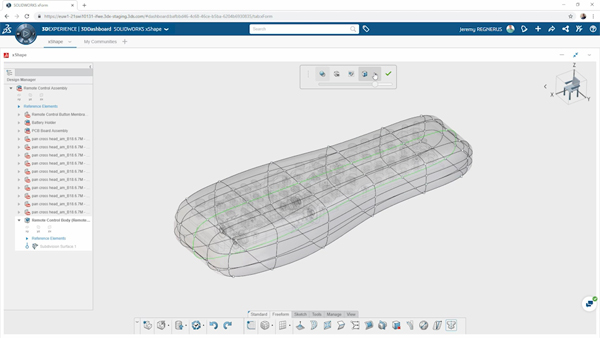 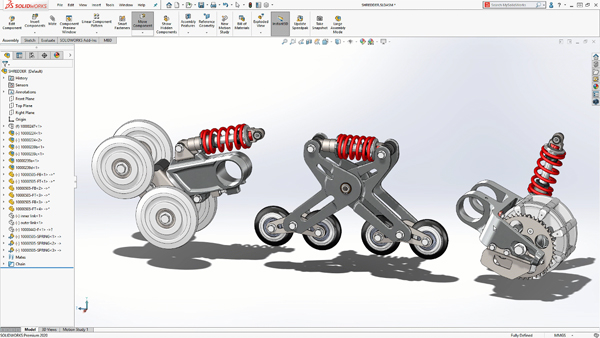 A technology preview of flexible parts in assemblies in SOLIDWORKS 2020. Image courtesy of Dassault Systemes.

Last SolidWorks World (in a Manner of Speaking)

While the company's flagship product SolidWorks will remain, the user conference associated with it, is about to go through a name change. In 2020, the event will be rebranded 3DEXPERIENCE World. The move was announced by Bassi on stage, reiterated by the company's official twitter updates.

That wraps up the Day 3 of General Session at SOLIDWORKS World 2019 - thanks again to everyone who joined us here in Dallas and also attended the live streams! See you in Nashville! #SWW19 pic.twitter.com/KIxZFxdNWt

For many veterans with a deep emotional bond to SolidWorks, it may feel like the end of an era. Some at the show, like Twittter user Dennis Hotson, expressed their thoughts with selfies.

The last SolidWorks Worlds EVER! Not feelings this whole rebranding to 3D Experience. #SWW19 #SaveSWW pic.twitter.com/cA0y2mLeJB

In his own blog post, Bassi wrote, “While change is coming, I’m here to tell you that SOLIDWORKS, and the spirit of SOLIDWORKS World, will not be left behind ... Of course, 3DEXPERIENCE World will include SOLIDWORKS, but we also want to integrate SOLIDWORKS in the greater selection of solutions available on the 3DEXPERIENCE platform ... 3DEXPERIENCE.Works is an example of how SOLIDWORKS users will benefit from Dassault Systèmes’ large R&D investment.”

For more news from the showfloor, watch the video report below: