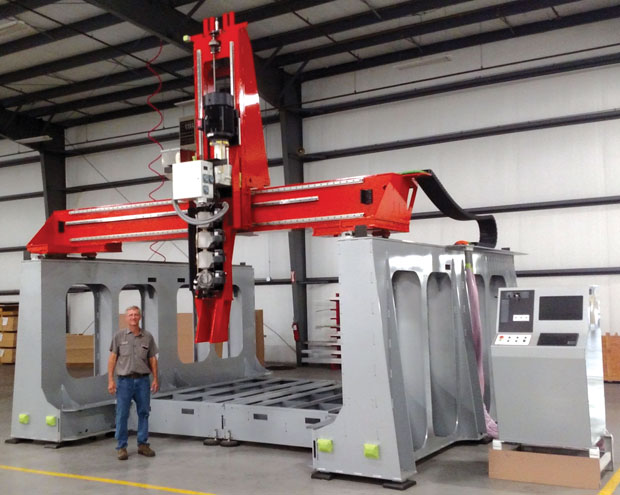 A massive plastic-extrusion additive manufacturing system is in development by Thermwood, a traditional CNC equipment manufacturing company, is pictured. Image courtesy of Thermwood.

There was a time when 3D printing a 6-in. long car model was a mind-blowing process. Now companies are building full-size car bodies, functional bridges, live-in houses and operational jet engines. Additive manufacturing (AM) has become not just big business but a business of big proportions.

Keeping Up with Big Developments

Senvol is a free, online database of industrial AM systems. Launched in January 2015, the database lets you search by one or more of 30+ parameters, including X/Y/Z build dimensions, AM technology, material category and price. Senvol also provides analytics of many aspects of the AM industry, helping clients quantify such business elements as cost-effectiveness, market size, supply chain information and potential growth.

Thinking about scaling up your own designs? DE scoped out industrial-strength AM systems that can take on the big jobs, using build-volumes with a minimum of just about 1 meter (39 in.) dimension in one or more of the X/Y/Z build directions. Interestingly, most systems met that criterion for X or Y, or both X and Y values; however, a few systems qualify here based strictly on their extended Z-axis capacity. Also, with most equipment optimized for a single material family, the listings are grouped under plastics-plus, metals, and sand/ceramics applications. We’re leaving the bridges and buildings for another day.

Why Big AM Systems Have Been a Big Challenge

You might ask, what took so long? With dozens of AM systems in commercial use more than twenty years ago, why didn’t “scaling up” the technology simply mean multiplying everything by ten?Ron Ellenbogen, product marketing director at Stratasys, says, “The challenge is maintaining print accuracy and quality on large parts with intricate detail.”

And Tim Caffrey, senior consultant at Wohlers Associates, adds: “The relatively slow consolidation speed of AM processes (i.e., cubic in. per hour) limits the business case for the production of massive parts, and speed and throughput aren’t necessarily solved with larger build chambers.”

At 3D Systems, Stacie Hoche, SLA product manager, explains: “Maintaining accuracy not just locally (over a few cubic inches of part) but globally (consistently accurate from one end of a meter-long part to the other) requires very precise movement of both UV-curing lasers and part elevators.  The 3D Systems ProX 950 has two lasers that work simultaneously, and we developed a special calibration technology to make sure they’re always in perfect sync.  The part also has to be raised and lowered very precisely as each layer is printed; given that a single part can weigh hundreds of pounds, doing so requires two elevators that also have to work in perfect sync.”

Developers at Materialise found that a major challenge to making the company’s aptly-named Mammoth systems was development of a coating system capable of depositing a liquid-resin layer of 2000 x 700 mm in just a few seconds. Materialise director Bart Van Der Schueren, says: “A second challenge relates to the machine calibration and the alignment of the three scan fields with each other. This is of utmost importance if you want to print parts that cover the full extent of the machine.”

A third challenge Van Der Schueren points out was the increased time it was taking to generate supports for large, complicated parts, which is why the company developed its automated, e-stage support software. “Today,” he adds, “our main challenge relates to exothermal heat release while the photocuring is taking place. This heat generation urges us to slow down the building process, whilst the hardware could print significantly faster.”

Metal AM systems must cope with some different challenges. LaserCUSING, the AM process developed by Concept Laser, involves residual stresses throughout a metal part, which the company says become more difficult to handle with growing part size. In addition, the scan field of a single-scan unit is limited, so multi-scanner systems or movable scan units are necessary for bigger working fields. As the company’s XLine family demonstrates, both approaches are generally possible, but with increasing size and number of scan units/drives, the complexity of the overall machine also increases.

Additive Manufacturing Projects at SABIC: the BAAM System and More

In 2014, SABIC made headlines for its collaboration with Local Motors and Oak Ridge National Laboratory when the Strati concept vehicle was 3D printed in just 44 hours during the IMTS show. The Strati, printedjust outside the trade show floor on a Big Area Additive Manufacturing (BAAM) system from Cincinnati Inc., used SABIC's proprietary THERMOCOMP compound, a carbon fiber-reinforced material that minimizes warping when printing large parts. SABIC has been in the materials development industry for years. The company says it is committed to enabling the evolution of both additive manufacturing (AM) processing and materials expertise, with the company noting: “There is a growing interest within the aerospace and automotive industries to use large-format printing technology. Because many of these parts tend to be larger with simpler geometries, producing the required tooling on a large format printer like the BAAM (versus printing multiple smaller parts and then joining them together) can enable shorter overall part production times and reduce the risk of failures along bonding joints.”

So Close to 1 Meter

With a number of companies offering build volumes with almost-1-meter dimensions, we felt we should mention a few of them. By building your part on a diagonal, you could gain that hypotenuse benefit.

A number of groups and companies have projects in the works to produce their own large-scale systems, some for general-purpose use and some for very targeted applications. For FFF systems, check out the ongoing work at Builder, Monkeyfab, Powercap Energy Systems, SeeMeCNC and Stacker. In the meantime, here are two groups developing large systems for metals and composites.