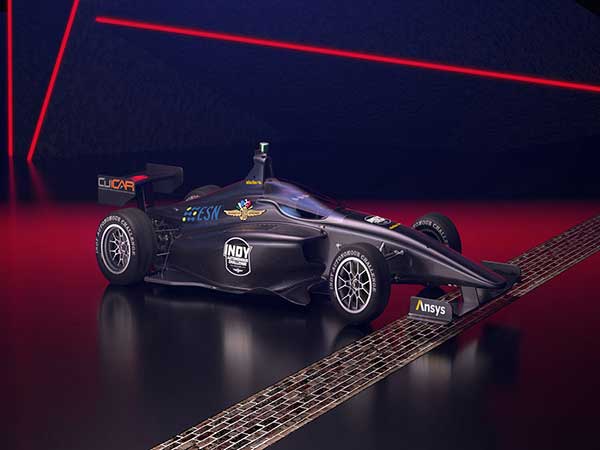 A shared goal of the Indy Autonomous Challenge and Ansys is to enable the development of software that can overcome existing barriers to help speed the commercialization of fully autonomous vehicles. Image courtesy of Ansys.

Ansys is empowering university students around the world to design, build and test next-generation autonomous vehicle (AV) software through the Indy Autonomous Challange (IAC). Students participating in the $1.5 million prize competition will program modified Dallara racecars for reportedly the world's first autonomous race at the Indianapolis Motor Speedway (IMS). The challenge was created to advance technology that will speed the commercialization of fully autonomous vehicles and advanced driver-assistance systems (ADAS).

As the exclusive Simulation Sponsor of the IAC, Ansys is providing free access to products in its Ansys Autonomy suite—enabling students to develop and refine automated driving software for the modified Dallara IL-15 vehicle and validate it virtually in a closed-loop simulation environment.

Ansys also hosted the first of four events designed to train students on AV simulation software and prepare teams for the final race. The challenge includes hackathons and educational workshops, a simulated high-speed self-driving car race and a head-to-head final competition reaching speeds of up to 200 mph at the IMS on October 23, 2021.

“The Indy Autonomous Challenge is an incredible opportunity to compete at the cutting-edge of driverless racing,” says Charles Vorbach, controls systems architect for the MIT Driverless team. “Our team is excited to develop our entry using Ansys' simulation tools. We admire their use of sophisticated vehicle models, compatibility with open source systems like ROS2, and user-friendly code-generation that is intuitive enough for even non-software engineers. Most of all, Ansys' software reduces the amount of physical testing required, which will help safely speed development, especially in the world of COVID-19.”

“We're challenging students to develop autonomous vehicle software that can operate at speeds of up to 200 mph,” says Matt Peak, managing director of Energy Systems Network, a primary organizer of the IAC. “We approached Ansys because that would simply be an impossible task without the best simulation software available. Through Ansys' virtual environment, student teams can quickly design, test, iterate and validate their software with high fidelity in time for the final race.”

A shared goal of the IAC and Ansys is to enable the development of software that can overcome existing barriers to help speed the commercialization of fully autonomous vehicles and enhance ADAS in cars under human control.

“For more than 100 years, IMS has served as a breeding ground for technological advancements,” says Eric Bantegnie, vice president and general manager at Ansys. “We're continuing that legacy by putting Ansys Autonomy, the most comprehensive autonomous vehicle simulation software on the market, into the hands of students who will ultimately play a vital role in bringing safe, autonomous vehicles to public roadways.”

About the Indy Autonomous Challenge

The Indy Autonomous Challenge, organized by Energy Systems Network (ESN) and the Indianapolis Motor Speedway (IMS) is a $1.5 million prize competition among universities to program modified Dallara IL-15 racecars and compete in the world's first autonomous head-to-head race around the famed Indianapolis Motor Speedway on October 23, 2021. Racing at speeds of up to 200 mph, the primary goal of the Challenge is to advance technology that can speed the commercialization of fully autonomous vehicles and deployments of advanced driver-assistance systems (ADAS). These enhancements will lead to increased safety and performance in all modes of racing and commercial transportation. In addition, the competition is a platform for students to excel in Science, Technology, Engineering and Math (STEM).