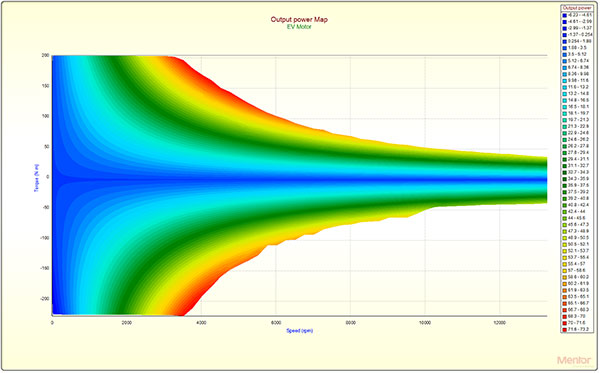 Release v6.3 of the Simcenter Motorsolve electric machine design and analysis suite debuts seven new and improved performance efficiency maps. You can now export 1D motor models to the Simcenter Amesim platform, where they can be used during mechatronic system optimization. Shown here is an output power map. Image courtesy of Mentor, a Siemens business.

Electric motors have supplanted dogs as humanity’s best friend. Living off grid in a yurt is about the only way to escape their ubiquity. Even then, it would be cheating to have your car a short hike away. It's loaded with them. Funny thing is that it's not easy to design and analyze electric motors and generators for vibrations, emissions that drive you and electric stuff nuts, optimal performance or safety.

Mentor recently released version 6.3 of its Simcenter Motorsolve suite of electric machine design and analysis software. Now, one of the keys to Simcenter Motorsolve is that it has an embedded finite element analysis (FEA) engine that, among other features, provides you with lots of automation that handles things like mesh refinements and post-processing. It also has a template-based interface that seems to greatly help you work with most electric motor topologies. You can import custom rotors and stators as DXF files.

The suite has five modules for different applications, such as brushless DC and permanent magnet AC motors, induction machines and so on. There's also a module providing thermal analysis functionalities. You get it. The suite has a broad range and plenty of flexibility.

At a Glance: Simcenter Motorsolve Version 6.3

Version 6.3's new export to Simcenter Amesim capability sounds really intriguing. Basically, you can use it for a mechatronic system-level analysis for performance as well as for safety, noise vibration, harshness and emissions standards. The sketch is that you can export to Simcenter Amesim four types of models that accurately portray an electric motor's performance and you're off to the races. These exportables include a simplified parametric characterization, a linear model using constant machine parameters and a pair of non-linear models.

Today's main write-up has more on all this, but you have two far better resources linked for the full skinny at the end. One, watch the Simcenter Motorsolve v6.3 new features video. It has a demo showing off the Simcenter Amesim potential. Two, sign up for a complimentary web-based trial.