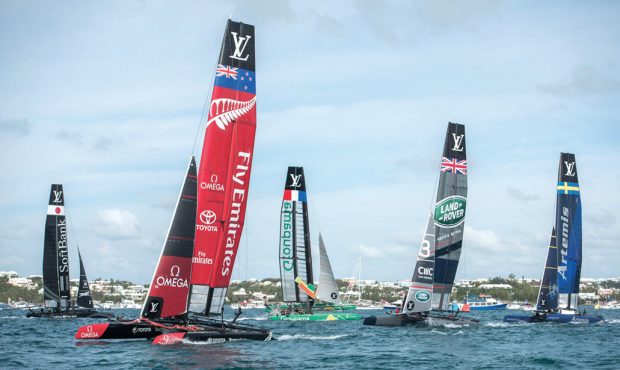 The five challengers to Team Oracle USA. Photo by Ricardo Pinto via ACEA.

Related Story: It Takes Technology and Teamwork to Win the Race
On May 26, in the crystal blue waters of Bermuda’s Great Sound, six teams unfurled their wind sails and broke out their collection of hydrofoils, kicking off the month-long competition for the 35th America’s Cup, the world’s oldest sailing race. Defender Oracle Team USA goes up against teams from New Zealand, France, England, Japan and Sweden. As always, the competition is arduous, but this year’s race introduces major rule changes that have upended the boats’ design while demanding more rigorous physical performance from crew members. 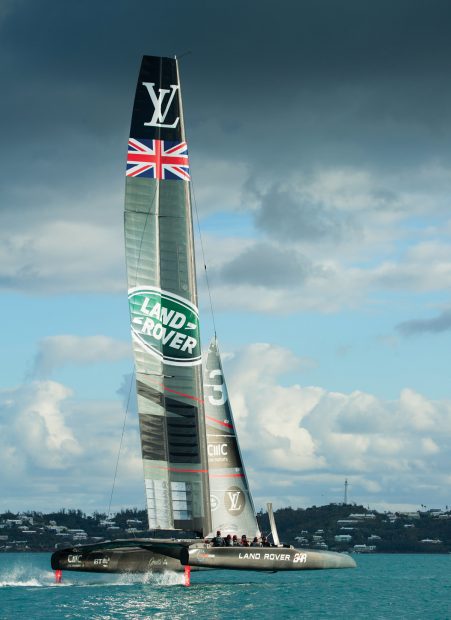 The storied race got its start in 1851, when the New York Yacht Club’s America schooner challenged 15 yachts in Britain’s Royal Yacht Squadron to sail between the Isle of Wight and the south coast of England. The U.S. boat finished minutes ahead of its closest rival, setting the stage for one of the longest running sports competitions, which now bears its name. After its first victory, the United States embarked on a 132-year winning streak, defending its trophy 24 times between 1870 and 1980.

During the decades of U.S. domination, the boats did not change much: The schooners gradually morphed into the more recognizable 1930s-era J-Class sailboats, complete with majestic wooden hulls and giant sails and spinnakers. With the exception of the “12 Meter Rule,” which called for smaller, more manageable racing boats that cost less and didn’t have to be capable of crossing the Atlantic Ocean, regulations governing what teams could do in pursuit of sailing’s biggest prize were scant. 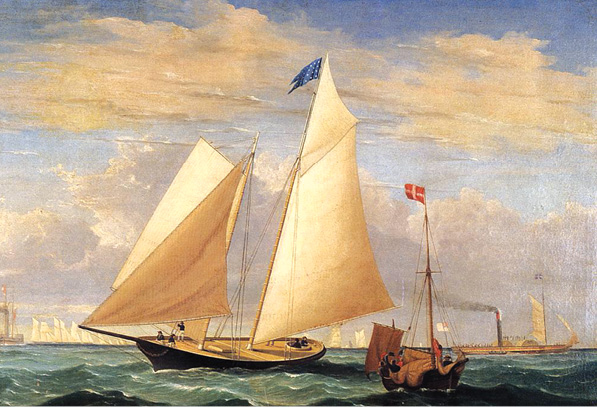 Then: A painting of the yacht “America” winning the first international race, by Fitz Henry Lane, 1851.

“At this point in time, there were very few rules—I’m not even sure the length of boats was a constraint for the teams or even how many crew members,” says Alain Houard, marine offshore vice president at Dassault Systèmes, which collaborates with several current America’s Cup teams, including Oracle Team USA and Groupama Team France.

Things began to change in 1983, when Australia’s Australia II introduced a radically designed winged keel to the 12-meter class boats. To fire back, the U.S. team under Captain Dennis Connor in 1988 designed a lighter class of boat in the form of a multi-hull catamaran, the Stars & Stripes. After some legal challenges, the vessel was okayed by the rules committee and ultimately went on to win that race. Subsequently, this more modern catamaran design set off another series of rule changes—this time, calling for longer, lighter boats with twice as much sail power than the previous 12-meter racers. 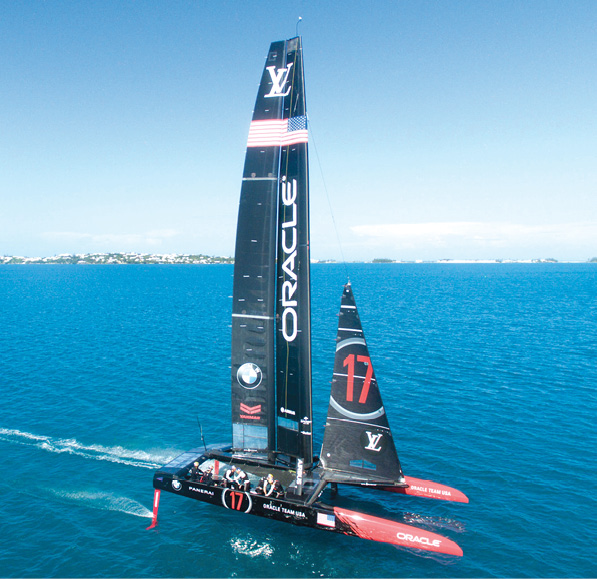 Now: The defending champion’s modern catamaran-style lifted out of the water on hydrofoils as its huge wing sail catches the wind. Photo © Oracle TEAM USA by Sam Greenfield via ACEA.

The 34th America’s Cup, which sailed out of San Francisco Bay in late summer 2013 when the wind speeds were predictable and strong, led to more rule changes that impacted boat designs. The latest class of boats, driven by the winning Oracle Team USA, was dubbed AC72 and encompassed catamarans of up to 86-ft. with giant wing sails. These boats also introduced the concept of hydrofoils, sailing gear that lifts the boats out of the water at speeds over 40 knots (46 mph) and became one of the competition’s few areas of design freedom and differentiation.

“The competition went from a world where there were almost no rules and everyone could do what they wanted and invent a catamaran from scratch to a world where they have to innovate and invent with a very specific design context,” Houard says. Because of their ability to sail at high speeds, the boats were also more at risk, leading to several training accidents that precipitated additional rule expansion to include more safety regulations.

This latest America’s Cup introduces yet another round of significant rule changes—the most dramatic being the reduction in boat size to just 50 ft. Although intermediary races had teams sailing AC62 class boats, at about 60 ft., the teams and committees decided to cut the size back even further in an attempt to cut costs, improve safety and bolster accessibility to other teams. Inspired by the AC45 sport boats that were tested between major races, the America’s Cup committee settled on a 48-ft. wing masted foil catamaran as the de facto boat design to race at the Bermuda-bound competition. 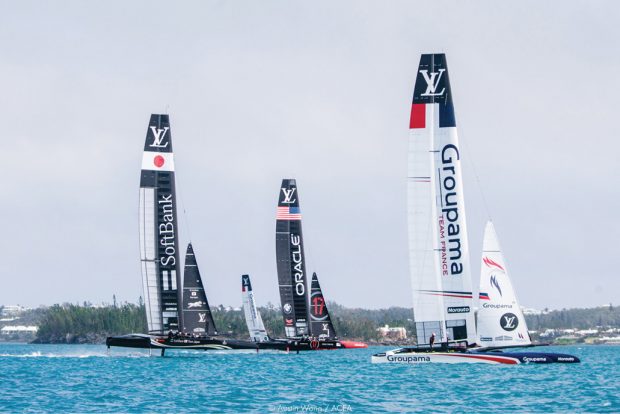 Teams had the chance to collect design data as they trained and competed in qualifiers. Photo © Austin Wong / ACEA.

“It is clear that if we raced smaller boats in 2017, we could dramatically reduce costs without sacrificing any of the spectacle or the design, engineering and athletic challenge fundamental to the America’s Cup,” Commercial Commissioner Harvey Schiller was quoted as saying.

The smaller, more muscular AC50 class of boats achieves the same wind speeds as the AC72 class and then some. The hulls, which now play a smaller role in the boat’s overall performance because they are rarely in the water, remain tightly controlled under the 40-plus-page design rule document as is the wing, which is a slightly smaller variation of the one found in the AC62 class. Where teams like Oracle and others gain advantage is in the design of more sophisticated control systems and creative foil shapes, which are pushing the boat’s performance beyond where anyone expected.

“What really makes these boats special is that they look really similar from a distance, but things are left open in the design of the system,” says Aaron Perry, design engineer for Oracle Racing. “Each team has different hydraulic schematics and the foil shapes are all different—those are the deciding factors on the boats.”

The hydrofoils (or daggerboards in some sailors’ parlance) are designed to minimize drag and boost power, lifting the catamaran hulls out of the water so they appear to fly through the air across waves at speeds approaching 60 mph, nearly double what was possible prior to use of foils. Teams competing in the America’s Cup are only allowed to race with two sets of foils; most build one pair geared to heavier winds (usually smaller with less lift and drag potential for higher speeds) and the other set is primed with more size and lift to excel in lighter wind conditions.

“From a design standpoint, that puts a lot of emphasis on the foils themselves and shape of them,” Perry explains. “Minute differences seem imperceptible if you’re looking at boats as a spectator, but they make a huge difference for how they perform in different ranges of wind speeds.”

At Oracle TEAM USA, 3D modeling tools like Dassault’s CATIA CAD and SIMULIA simulation packages are instrumental for optimizing these foil shapes as well as for streamlining the process, allowing the team to be agile and adapt to design changes quickly, Perry says. In general, simulation allows the teams to invest or disregard ideas in a more confident way, which is critical given the design constraints coupled with the limitations on time and money, according to Valerio Marra, marketing director at simulation provider COMSOL, who is also a certified U.S. sailing instructor.

Setting a Course for the Cup

The 35th America’s Cup will take place this month on the Great Sound of Bermuda, but teams have been preparing by racing in the Louis Vuitton America’s Cup World Series preliminary events that began in 2015. The series regattas were raced in the smaller AC45F-class catamarans that were all designed to the same set of rules and built in the same yard.

At the conclusion of the series in November 2016, Land Rover BAR was on top, followed by defending champion ORACLE TEAM USA as they headed into the qualifiers. The top four teams advance to the Louis Vuitton America’s Cup Challenger Playoff semi-finals June 4-8, with the winner facing defending champion ORACLE TEAM USA in the final match, which is scheduled for June 17-18 and June 24-25.

The America’s Cup is named after the yacht America, which won the first race in 1851. The United States then embarked on the longest winning streak in the history of sport—132 years—until losing the trophy to Australia II in 1983.

“You might have 20 ideas in mind, but you can see only five are good,” he explains. “In this case, they are building things that you don’t build for everyday use and there aren’t millions of them. Simulation enables you to run more tests while doing real-world testing at the same time. It’s more important than ever for these guys.”

Given that teams are limited in areas where they can innovate, optimization is key, adds Dassault’s Houard. Dassault’s 3DEXPERIENCE delivers the 3D modeling, simulation and collaboration capabilities in a single platform, which helps speed the iterative design cycle and brings collaborators from different locations into a common design forum.

In addition to robust use of simulation for foil design, including the study of turbulence and airflow, the Oracle team has leveraged team sponsor BMW’s wind tunnel for aerodynamics testing as well as liberal use of 3D printing. 3D printing is a particularly useful tool for daggerboard design because the process allows designers to draw things they couldn’t possibility produce with machining processes as well as hollow out parts for optimal aerodynamics, explains Perry. “It’s so much faster to produce this way instead of sending it out to a machining operation, which could take weeks,” he says. “It compresses the time it takes to get from a finished design to getting parts out on the boat.”

Oracle TEAM USA’s boat for the 35th America’s Cup is also equipped with hundreds of sensors and Bluetooth, fiber optics and Wi-Fi connectivity capabilities, and every sailor on the boat is outfitted with a wearable to track heart rate and other bio signals in real time to optimize their performance given that the race requires far more athleticism than past sailing competitions. In total, the boat generates gigabytes of real-time data that will be leveraged for a variety of purposes, from weather modeling to course planning and subsequent boat design changes.

“The tools, the computing power, the amount of data we’re collecting in the process—everything has ramped up to the point where we are able to predict much more accurately what will happen on the water than what was possible before,” says Perry, who counts the upcoming 35th America’s Cup as his sixth major race. “Everything has advanced to a level that this Cup feels different than previous ones.”