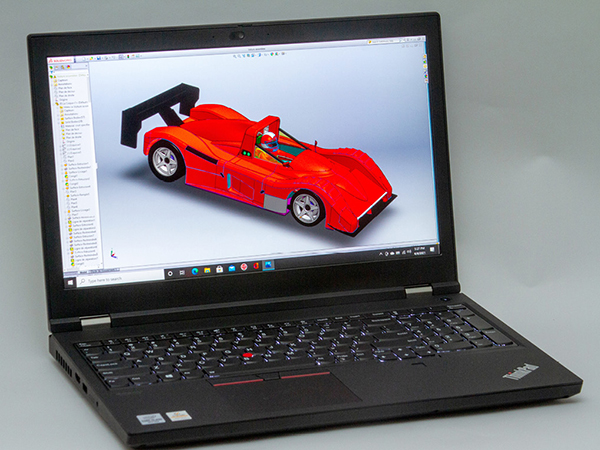 Last year, Lenovo launched the next generation of its ThinkPad P Series mobile workstations. While we have already reviewed several of the thin, lightweight computers in the new lineup, we recently received one of Lenovo’s new ThinkPad P15 systems. The successor to the ThinkPad P53, the new P15 Gen 1 represents a complete re-engineering of many aspects of the company’s full-size 15-in. laptop.

With enhanced thermal design, including a 30% larger CPU heat sink, larger vents and a new thermal mesh to dissipate heat faster, Lenovo claims that users can take full advantage of Ultra Performance Mode to harness more power from a ThinkPad P Series mobile workstation than ever before.

The new Lenovo ThinkPad P15 Gen 1 comes housed in a charcoal gray case with a top cover constructed of a mix of polyphenylene sulfide and glass-fiber material. The system measures 14.75x9.94x1.44-in. and our evaluation unit weighed 6.11 lbs., over 2 lbs. heavier than the ThinkPad P1 G3 we recently reviewed (DE; January/February 2021). The P15 system we received included a 230-watt power supply, which measures 6.62x3.44x1.0-in. and weighs 1.95 lbs. And of course, the lid features the Lenovo ThinkPad logo with its glowing red dot over the “I.”

Lenovo keyboards have always offered perhaps the best typing experience available in any laptop, and the ThinkPad P15 is no exception. Raising the lid reveals a spill-resistant keyboard with 105 mostly full-size keys, including a separate numeric keypad. Two levels of backlighting can be toggled by pressing the Fn key and spacebar. 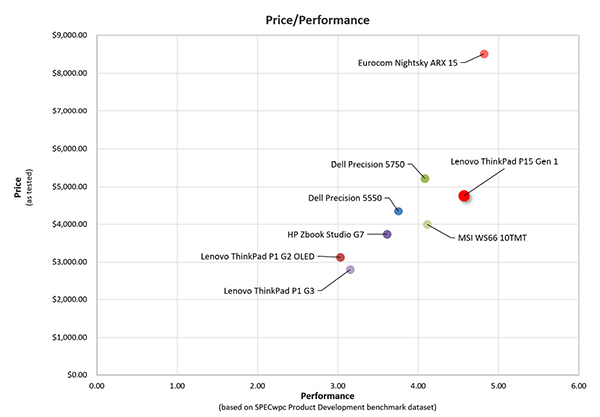 A round power button is located to the upper right of the keyboard and a 3.94x2.75-in. touchpad with three buttons is centered below the spacebar. There is also the familiar red Lenovo pointing stick nestled between the G, H and B keys. The caps lock key has its own LED, as do the keys dedicated to the speakers, microphone and number lock. A fingerprint reader is positioned below the cursor keys, while the Dolby Atmos speakers are located below a grille above the keyboard.

A narrow bezel surrounds the display panel, yet still provides space above the panel for the webcam, which includes a privacy shutter. Lenovo offers a choice of four different display panels, including a brighter (600 nits) FHD display and two different ultra-high-definition (UHD; 3840x2160) displays. All three higher-priced panels include Dolby Vision HDR. Systems equipped with UHD panels also come with infrared cameras, and the top-of-the-line display uses OLED technology and is touch-enabled.

Lenovo offers eight different CPUs, including 2.6Ghz and 2.7GHz 6-core Intel Core i7 processors, two different 2.4GHz Core i9 processors, a 2.8GHz 6-core Xeon CPU and a 2.4GHz eight-core Xeon processor. The system we received came with an Intel Core i9-10885H, an eight-core 2.4GHz Comet Lake CPU with a maximum turbo speed of 5.30GHz, 16MB SmartCache and a thermal design power rating of 45 watts, which added $935 to the base price.

While the base configuration comes with just 8GB of RAM, the ThinkPad P15 Gen 1 can accommodate up to 128GB of memory. Our evaluation unit included 32GB, installed as a pair of 16GB 2933MHz small-outline dual in-line memory modules, which added $430. Systems equipped with a Xeon CPU can support error-correcting code (ECC) or non-ECC memory. A similar amount of ECC memory would cost $555.

The Lenovo ThinkPad P15 Gen 1 supports up to two solid-state hard drives. In addition to the 256GB OPAL SSD in the base model, Lenovo offers three other choices—512GB, 1TB and 2TB—for a maximum storage capacity of 4TB. The system we received included a single 1TB PCIe NVMe M.2 OPAL drive, which added $395.

Though the base configuration includes an NVIDIA Quadro T1000 with Max-Q, that is just the starting point. Lenovo offers four other NVIDIA GPUs, including the Quadro T2000 as well as three virtual reality-ready NVIDIA RTX graphics boards: the RTX 3000, RTX 4000 and RTX 5000. Our evaluation unit came with an NVIDIA Quadro RTX 5000 with Max-Q, a GPU with 16GB of discrete GDDR6 memory. This board features 3072 compute unified device architecture cores, 384 Tensor cores and 48 RT cores. Its 256-bit interface enables the GPU’s 384GB/second bandwidth, while consuming 90 watts of power. This high-end board added $3,145 to the total system cost.

Because the ThinkPad P15 is a full-size mobile system, Lenovo is still able to include an ample assortment of ports. The right side includes a security lock slot, a USB 3.2 Type A port and a SD card slot. There is also space for a Smart card reader, a $10 option not included on our system. The left side provides an HDMI port, an always-on USB 3.2 Type A port, a headphone/microphone combo audio jack and space for an optional Nano-SIM card. The rear of the case includes a full-size RJ-45 Ethernet port, a USB 3.2 Type C port, a pair of Thunderbolt 3 USB-C ports and the power input.

All Lenovo ThinkPad P15 Gen 1 systems include an Intel Wi-Fi AX201 802.11ax adapter plus Bluetooth 5.1 and a 6-cell 94Whr battery with Lenovo’s Rapid Charge technology that can bring the system back up to 80% capacity in just an hour. The battery kept our evaluation unit running for 4.7 hours on our battery run-down test, while running entirely on the discrete graphics. Better battery life can be achieved by using a combination of discrete and integrated graphics (which must first be toggled on in the BIOS). The system remained cool and relatively quiet throughout our tests, reaching 55dB when under heavy compute loads.

We have come to expect excellent performance from Lenovo mobile workstations, and the ThinkPad P15 Gen 1 continues that tradition. On the SPECviewperf test, which focuses almost exclusively on graphic performance, the ThinkPad P15 Gen 1 outperformed every other mobile workstation we have tested to date on nearly every dataset. Although it did not set top marks on the SPECapc SolidWorks benchmark, the P15 Gen 1 still ranked near the top on every aspect of this test.

The Lenovo ThinkPad P15 Gen 1 also performed very well on the SPEC workstation benchmark, including delivering top scores in the Product Development category, most important for most DE readers. While the 32-second average to complete our AutoCAD rendering could not beat the 27.1-second mark set by the Eurocom Nightsky ARX 15 (digitalengineering247.com/r/24769), the Lenovo ThinkPad P15 Gen 1 ranks as one of the fastest mobile workstations we have ever tested. 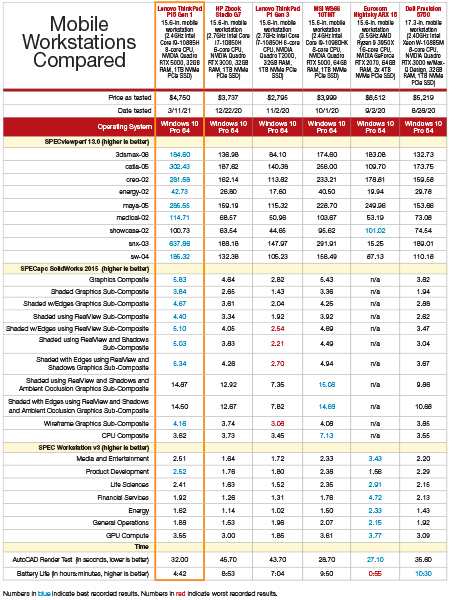 Our evaluation unit came with Window 10 Pro pre-installed, which added $70 over the cost of Windows 10 Home. Since the standard warranty only covers the system for one year, with depot carry-in service, our as-tested price of $4,750 includes an additional $93 to extend the warranty for an additional two years. Other warranty options include warranties of up to five years as well as onsite repairs and premier support for one to five years. Lenovo also offers accidental damage protection and battery replacement warranties.

The Lenovo ThinkPad P15 Gen 1 is independent software-vendor certified for a wide range of applications from Autodesk, Dassault Systèmes, PTC and Siemens. It has also passed military certification tests and other quality checks to ensure it can perform in extreme conditions. Though its high-end RTX 5000 GPU makes this one of the more expensive mobile workstations we have tested recently, it outperformed systems costing thousands of dollars more. Once again, Lenovo has delivered a system offering a portable solution for engineers needing a high-end, full-size mobile solution.