Pedal to the Metal

Digital simulation and modeling allowed VinFast to launch a car company from scratch in less than two years.

Digital simulation and modeling allowed VinFast to launch a car company from scratch in less than two years.

AI Software Sees Exponential Growth
More organizations are leveraging the power of artificial intelligence in engineering design.
Medical Device Design: Getting to Yes
There’s more to designing medical products than great ideas and a desire to make...
Digital Engineering’s Pivotal Moment
In efforts to combat COVID-19, many solutions are being developed by engineers collaborating with other...
Pedal to the Metal
Digital simulation and modeling allowed VinFast to launch a car company from scratch in less...
More Features

The automotive industry is consistently under pressure to accelerate design cycles that better meet shifting demand. But for most companies, the launch of a new vehicle requires years of development and validation. However, a new Vietnamese auto startup may point the way to more rapid development.

Armed with massive amounts of capital and advanced simulation technology, VinFast didn’t just quickly launch a new vehicle—they literally built the entire company from scratch, and went from design to completion of their inaugural vehicles and factory in less than two years.

VinFast is Vietnam’s first volume car manufacturer, and it debuted its first two models in June 2018 at the Paris Motor Show. The company is a subsidiary of Vingroup, the largest private company in the country. When VinFast launched, Vingroup operated in the real estate, retail and healthcare sectors as well. 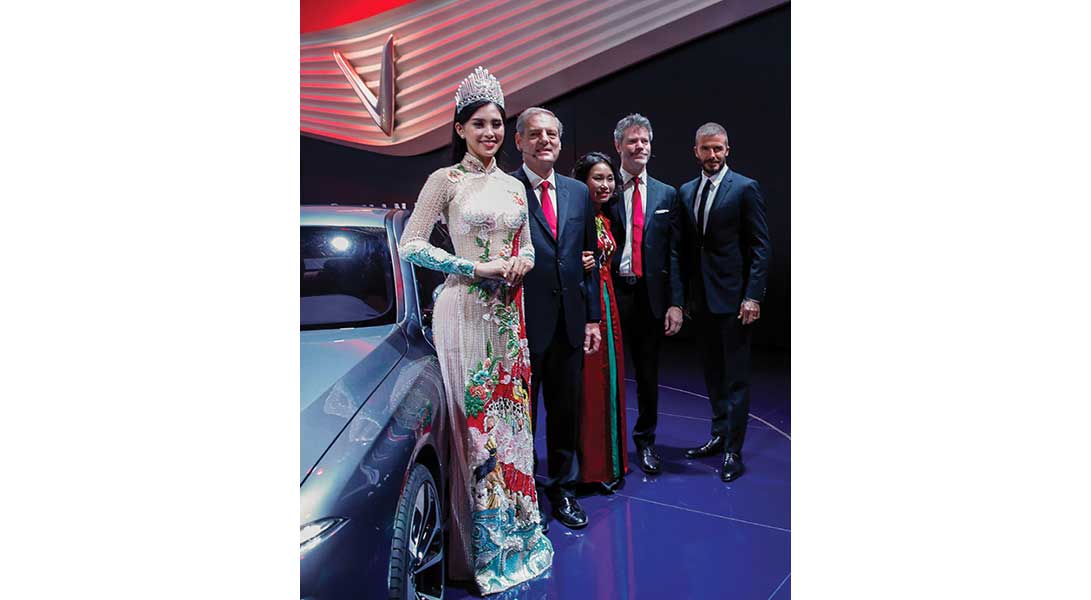 “Our chairman [Pham Nhat Vuong] has spent his career looking at what he felt was best for Vietnam and its people,” says David Lyon, director of design at VinFast. “He believes that Vietnam needs a manufacturing base to have a strong middle class.”

Vuong also famously lacks patience, which made traditional automotive startup scenarios unappealing. “He wanted to do this in two years, starting with nothing,” Lyon says.

To accomplish this unprecedented timeline, VinFast took an almost entirely digital approach to designing its vehicles and its factory. The company partnered with Siemens Digital Industries Software (and other Siemens divisions) to turn the company’s plans into reality. 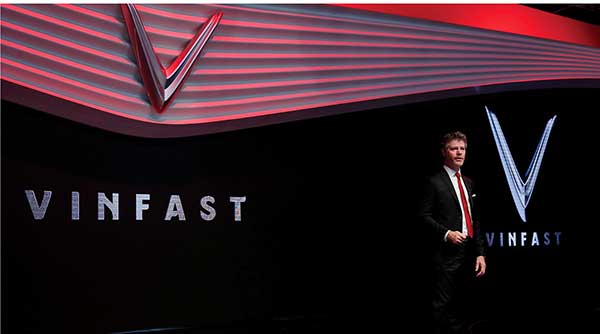 According to the original announcement from Siemens and VinFast, this holistic approach “increased speed and flexibility in development, ensured high global standards in production, optimized the manufacturing process and made the entire plant future-proof for further expansions and new business models.”

“Using the combined power of both product lifecycle management and manufacturing operations management technology is a key part of our digitalization journey,” said Jason Buxton, chief information officer at VinFast, when the company was launched. “To drive innovation within the automotive industry, it is essential to have the right technology in place.”

VinFast leveraged Siemens design tools such as the Xcelerator portfolio and Totally Integrated Automation portal, which facilitates a link between design and manufacturing, so modular manufacturing operations can respond to inputs accordingly.

The company created digital twins with Xcelerator, which combined simulations, test data and performance analytics. This helped reduce reliance on physical prototypes and accelerated the company’s ability to iterate and improve the design. Actual vehicle performance data can be collected, analyzed and fed back into the development cycle. 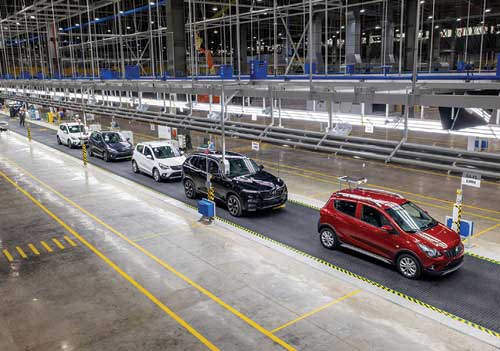 The flexible production facility can manufacture both cars and scooters.

VinFast used Teamcenter to help engineers collaborate throughout the design and production phases, and to ensure that the physical production lines could flex dynamically based on the virtual designs and commands.

“The key to this all going well is digital infrastructure and digital backbone that allow us to model everything virtually before it really happens,” Lyon says. “One thing about doing it this fast—it took us about half the time it takes for an [original equipment manufacturer] that’s been around for 100 years to put a car on the road. There’s a lot of risk here. That risk is uncomfortable, but it meant we had to rely heavily on the digital tools.”

The elimination of the traditional clay modeling step also helped accelerate development, according to Lyon.

“All of our engineering requirements and the assemblies live in the virtual world,” he says. “We worked with digital sculptures.”

Rather than start the design from scratch, Vingroup turned to outside companies to help launch the brand. The cars were designed with aid from Pininfarina (an Italian design studio), BMW and contract manufacturer Magna Steyr.

Vingroup’s chairman decided that part of the design process would be to put the initial concepts online, and then have a contest in which the Vietnamese public could chime in with their own preferences.

“This would be crazy in any other setting,” Lyon says. “We had 60,000 people voting, and we knew we had a winner on our hands. By November 2017, there was not a lot of second-guessing and we were able to move forward.

“The key element we focused on was that we wanted to work with the best ... the only way to pull this off was to get the best partners. We weren’t going to spend years building an internal team to create standards,” Lyon adds. 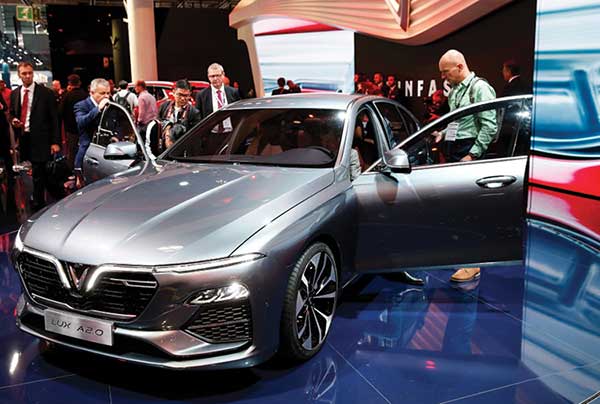 VinFast leveraged partnerships with leading suppliers and designers to accelerate the development process.

When talking to potential partners and suppliers, VinFast was frequently asked for specifications, but they had none. “We told them there is no team here creating specifications. You tell us what we should have and we’ll implement it,” Lyon says.

Lyon, who previously worked for General Motors, says the company asked potential partners to ignore all of the “dumb and unnecessary steps” that other OEMs usually asked their suppliers to follow. “We just asked them, ‘What would it take to do it in this time frame?’” Lyon says. “One by one, after a lot of internal discussions, they came to the table with plans that were able to meet that timing if it all went well.”

Surprisingly, everything went well. By December 2017, VinFast had an agreement with BMW to license the vehicle architecture and technology from them. “Before that, we didn’t even know what the underlying vehicle architecture was going to be,” Lyon says. “But in January we had our first model review. By March 2018, we were able to make all of our choices virtually without creating full dress models.”

Over the next several months, the company worked with suppliers and partners to create perfectly manufacturable surfaces that could be produced with cut tools. By October 2018, they were able to unveil the first models at the Paris Motor Show.

At the Paris event, the company launched its LUX A2.0 sedan and LUX SA2.0 mid-size luxury SUV. In 2019, the company added the LUXV8 SUV and Fadil city car to the line. The company also offers three models of electric scooter.

VinFast also needed a production facility. Part of the plant site was literally underwater during vehicle development. They broke ground in September 2017.

“One thing that Vingroup really knows how to do is build things quickly,” Lyon says. “We now have 4,750 employees, and we can do everything there from manufacturing the body and the engine, to the paint shop, and all subassemblies. We can make 250,000 cars and 250,000 scooters per year.”

In March 2019, the plant rolled out its first test vehicles. “We were all very concerned about this first build, and whether or not it was going to work. It had to be right the first time,” Lyon says. “We didn’t have time for do-overs. The first one rolled off the line, our chairman got into it, pushed the start button and drove it around the plant. We put a lot of trust in our digital tools, and they didn’t let us down.”

The Hai Phong, Vietnam, facility leverages Siemens automation equipment, and was designed based on a flexible production model. It is capable of making not only the sedan and SUV models, but also e-scooters, compact cars and electric busses. According to Lyon, the facility can be easily scaled up and down to meet demand.

“VinFast and their new production site are a great example of how the automotive industry is driving the digital transformation of manufacturing,” said Bernd Mangler, senior vice president, automotive solutions at Siemens Digital Industries, in a press release. “We are proud that we contributed with our offerings to create the virtual and real production lines including the technology for continuous optimizations along the entire lifecycle of the equipment—and of course, all had to happen in record speed.”

Deliveries of the first VinFast vehicles began in September 2019, far ahead of schedule. In January, the company reported it has already received 17,000 vehicle orders and 50,000 orders for electric motorcycles. With the success of the auto firm, Vingroup has jettisoned its retail and agriculture businesses and scrapped plans for an airline to focus on VinFast and its Vsmart smartphone brand.

VinFast chairman Vuong also hopes to launch the brand in the U.S. in 2021, and has pledged as much as $2 billion of his personal fortune to help make that happen.

Digital Twin Continues to Proliferate Software and Digital Industries
From the ancient Pythagorean Cup to the ultra-modern rocket launchers, all with Simcenter and all in this issue of Engineering Innovation.
Editor’s Picks: May 14-May 20, 2020
One of the picks will be chosen as DE’s Editor’s Pick of the Week.
Siemens Expands ODB Data Exchange Format
Company adds electronics manufacturing information flow to comprehensive digital twin.
Sponsored Content
Siemens Keeps Engineers Connected During Pandemic
Digital Engineering talks to Siemens' Brenda Discher about the company's efforts to support customers during the COVID-19 pandemic.
In Pursuit of Predictable 3D Metal Printing
Simulation software offers promise in the desire for repeatable, standardized 3D metal prints.
Siemens Opens Additive Manufacturing Network to Healthcare Industry
In response to the COVID-19 crisis, Siemens is giving healthcare providers and medical device designers access to its Additive Manufacturing Network.
Siemens Digital Industries Software Company Profile