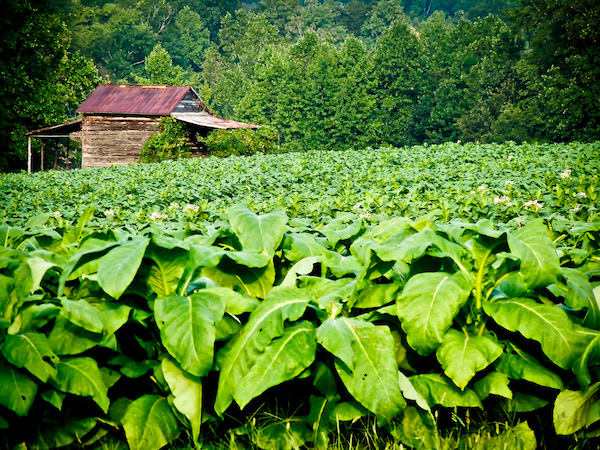 Tobacco farming was once a major industry in Virginia. Image courtesy of Ted Hodges.

Jim’s father grew tobacco in rural Virginia. His grandfather grew tobacco on the same farm, as did his great-grandfather. In the 1930s, the federal government created a price support program, based on a quota system, to assist tobacco farmers. As recently as 1940, farming remained the largest employer in Virginia, with 180,000 farms taking up two-thirds of the state’s land area.

In 1982, there were more than 11,000 tobacco farms in Virginia. By 2004, Congress had eliminated the pricing support program, resulting in consolidation into fewer, larger farms. By 2012, there were fewer than 400. By the end of the decade, Virginia had lost 75% of its tobacco farmers. Today, less than 1% of Virginians are employed in agriculture. Jobs in the textile and furniture industries, two other long-time mainstays of the local economy, have also vanished.

Life in rural Virginia has change dramatically, but many of the amenities that drew earlier generations to the rolling hills and shaded river valleys remain. The scenery is bucolic. The state is home to more than 175 colleges and universities, including three of the top 40 in the nation. And a network of highways and railroads means that even the center of the state is within a day’s drive of two-thirds of the U.S population.

For the past decade, the Commonwealth of Virginia has invested in infrastructure and education and in attracting new business development. The state has consistently ranked among the Best States for Business list and in the top 10 in three categories: regulatory environment, labor supply and quality of life.

In 2019, I visited Roanoke and the surrounding area as part of a group of journalists hosted by the Virginia Economic Development Partnership (VEDP). For three days, we toured schools where many of the descendants of Virginia’s tobacco farmers are focusing on science, technology, engineering and mathematics (STEM). We also visited some of the high-tech companies that have established new manufacturing facilities in the foothills of the Blue Ridge Mountains.

Road to the Future

The Virginia Tech Transportation Institute (VTTI), nestled on a hillside in Blacksburg, is advancing the design of vehicles and infrastructure to increase safety and reduce environmental impacts. Researchers evaluate the efficacy of pavement materials, lighting design, mobility alternatives and vehicle design.

A highlight of the visit was the Smart Road, a test track for intelligent transportation systems technology. Built as a partnership between the Virginia Department of Transportation, Virginia Tech and the Federal Highway Administration, the facility features 400 pavement sensors embedded in 12 asphalt pavement designs to test pavement performance, a 750-m weather-making system capable of creating rain or snow and a variable lighting section for testing roadway light spacing and intensities.

Although you may not consider candles to be high-tech, the facility we visited in Pulaski County definitely was, producing more than 2 million candles every day. Korona Candles began operations in Poland in 1992. In 2013, the company entered the U.S. market, investing more than $18 million to convert a vacant, former auto parts factory into a modern manufacturing plant in Dublin, VA. The VEDP worked with Pulaski County and the New River Valley Economic Development Alliance to secure the project for Virginia, and the governor approved a $600,000 grant to assist with the project, creating 170 new jobs. 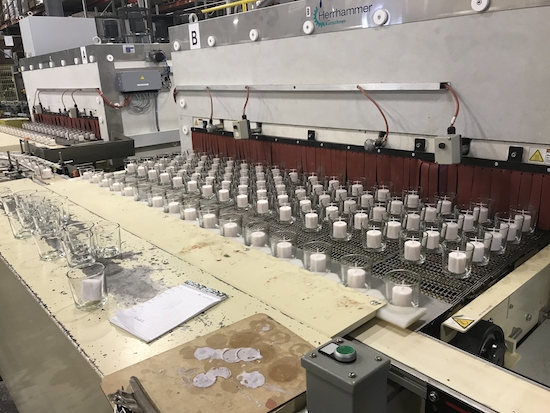 The second day of my visit focused largely on education. After touring Somic America, a company that specializes in manufacturing ball joints for suspension and steering systems, we took a helicopter tour over the Goodyear Tire and Rubber Company plant, ), as well as a 3,528-acre infrastructure-ready site destined to become another high-tech manufacturing facility, before setting down outside the Chatham Middle School in Pittsylvania County.

The county’s schools have been a key partner in developing and implementing various educational initiatives. The Pittsylvania Career and Technical Center, Career and Technical Education Programs, and the STEM Academy have been instrumental in laying a firm foundation in the economic growth of the region. For example, students can expand their learning options by participating in technology courses including cybersecurity, electrical automation and robotics, and precision machining.

From there, we moved on to the Institute for Advanced Learning and Research (IALR), where we toured the Gene Haas Center for Integrated Machining, named for the founder of NASCAR’s Stewart-Haas Racing and Haas Automation. With a $1 million Gene Haas Foundation endowment, the state-of-the-art facility enables students to train in a full-scale manufacturing workflow cell environment to support a realistic, fully integrated learning experience leading to industry-recognized credentials. 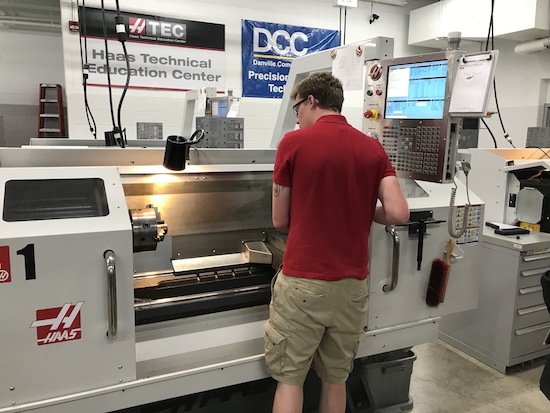 “Going from an agricultural community to a manufacturing environment is really a quantum leap,” says Haas at the center’s opening ceremony. “But on an acre of land, you can get so much for a crop. If you’re growing corn, you may get a few dollars a bushel. But if you take that same piece of land and you start manufacturing things, now you’re talking hundreds of thousands of dollars.”

After traveling around southwestern Virginia in a state plane for two days, we spent our final day on the ground, close to Roanoke. Our first stop was a visit to the Ardagh Group’s 525,000-sq.-ft. facility. In 2013, the company, which manufactures containers for the food and beverage industry, invested $93.5 million in the new plant, the largest single manufacturing investment in Roanoke County history, creating nearly 100 new jobs.

We then ended the day with a tour of Ballast Point Brewing and Spirits. In 2016, after being acquired by Constellation Brands, the San Diego company invested $47.8 million to establish an East Coast brewing operation in Daleville, just outside of Roanoke. And I was happy to be able to enjoy a pint of Ballast Point’s Sculpin IPA, one of my favorites, brewed in Virginia, before heading back to the West Coast. Unfortunately, Constellation Brands closed the taproom and restaurant areas of the Daleville facility a few months later, well before the COVID-19 pandemic.

Virginia is certainly not unique in its attempts to attract new, high-tech businesses to rural areas. Nor is it unique in its investments in STEM education in those areas to support business growth. And like most of the rest of the country, it is unclear what lasting impacts the virus will have on the local economy.

What is clear, however, is that as workers retire, the need for trained employees will continue to increase. With more than 15,000 people employed at 270 firms, advanced manufacturing companies now represent a strong cluster in the Roanoke region. More than 12% of the private sector workforce is employed in manufacturing, compared to 10% nationally (Roanoke.org).

Thanks to the state’s investment in education and technology, while Jim may no longer be growing tobacco on the family farm, but he can raise his family in the same valley where his ancestors first planted their roots.

Author’s note: Travel, lodging, food and local transportation was paid for by the Virginia Economic Development Partnership. The author received reimbursement for other expenses but received no compensation.