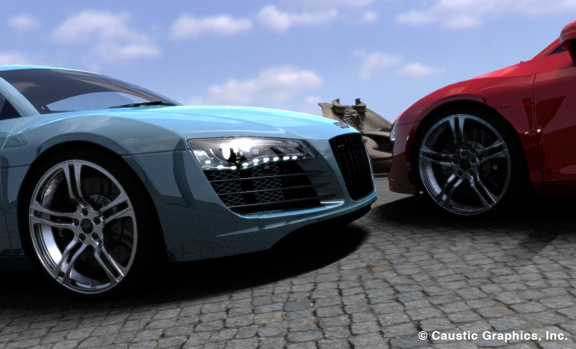 A few blocks away from San Francisco’s business district, in a nondescript brick building, a small band of developers are churning out strings of codes. Buried in these lines of codes is the destiny of a new startup, Caustic Graphics.

In March, I had a chance to visit Caustic Graphics’ office. Due to mechanical problems, the elevator was out of service that day, so I climbed the spiral staircase to reach their office, located on the sixth floor. In the conference room awaited James McCombe, one of the founders of the firm. This Belfast native is also the company’s chief technology officer. If you own an iPod or iPhone, you are indirectly indebted to McCombe. During his employment at Apple, he came up with the embedded rasterization algorithms, the basis of the rendering and compositing technology used in these iconic devices.

McCombe gave me a glimpse of what he’d been working on, via a striped-down interface that had been created solely for press demonstration. The product of his labor was an application programmable interface (API) based on OpenGL and OpenGL Shading Language. He called it CausticGL. Reinforced with a purpose-build accelerator card, he expected the program would produce 3D graphics 20 times faster than the current standard.

Describing the hardware, Caustic Graphics writes, “At the heart of this card is the CausticOne, which uses a host of new raytracing technology and algorithms (15 patents pending) to offload raytracing calculations and prepare data for your GPU/CPU, unlocking its ability to shade with complete efficiency and performance.”

In the last several years, real-time raytracing has become the Holy Grail of 3D immagery processing. The champions on the quest include NVIDIA, which proposes the Graphics Processor Unit (GPU) as the ideal solution to the problem. With the introduction of its general purpose parallel computing architecture CUDA (a C-based programming environment), NVIDIA hopes to capture some of the market segments (among them, gaming and mechanical simulation) currently served by the Central Processing Unit (CPU).

At the heart of the GPU-CPU debate is this simple question: To get better graphics performance, should you invest in a more powerful CPU or an add-on graphics card? NVIDIA would have you believe you can get more bang for your bucks with the GPU. Currently, the availability of a greater number of processing cores in the GPU tips the scale in the GPU’s favor. (For more on this debate, read Tom’s Hardware’s GPU-CPU performance comparison test here.)

If NVIDIA is suggesting the CPU should make room for the GPU, Caustics Graphics is proposing that the GPU makes room for its accelerator card, CausticOne. The company explains, “Other technology vendors claim to have solved the hardware-accelerated raytracing problem via traditional algorithms and parallel processing. These vendors’ solutions, however, ignore memory bandwidth, cache performance and parallel compute utilization. Only primary rays get a performance benefit with this approach. CausticOne, on the other hand, delivers bandwidth-friendly ray processing that enables your CPU/GPU to shade with rasterization-like efficiency.”

This week, Caustic Graphics officially released its raytracing card and software developer kit to qualified developers. The announcement states, “The CausticRT platform is U.S. $4,000 and includes CausticGL, a CausticOne card, and one-year of firmware and software updates. In addition, developers may purchase a one-year subscription for U.S. $2,500 that includes support for up to 10 incidents. Also available is CausticEngage, a consulting services program for developers that want additional support in creating or porting their application to CausticRT.”

A Startup Is Born

In addition to McCombe, Caustic Graphics’ management ensemble includes Alex Kelley, a former Autodesk VP for media and entertainment, and Sandro Pintz, a former director of engineering at NVIDIA. Since the solution is a software-hardware combination, I’m guessing Caustic Graphics is actively pursuing partnerships with workstation vendors and software vendors.

Will Caustic Graphics’ raytracing solution take off? They have three essential components that characteristize a promising startup: a vision, a dedicated team, and a product with a lot of potentials. Along the way, they’ll have to outperform the GPU-only solutions in the market.

In the not-so-distant future, Intel is planning to throw its wildcard into the graphics game. Codenamed Larrabee, the CPU maker’s upcoming multi-core GPU is designed to compete with the graphics accelerators from NVIDIA and ATI.

I’ll be tracking Caustic Graphics’ progress over the years as the graphics market evolves. I take great pleasure in telling the stories of newcomers that successfully challenge established players. Perhaps Caustic Graphics will give me a chance to file such a report. 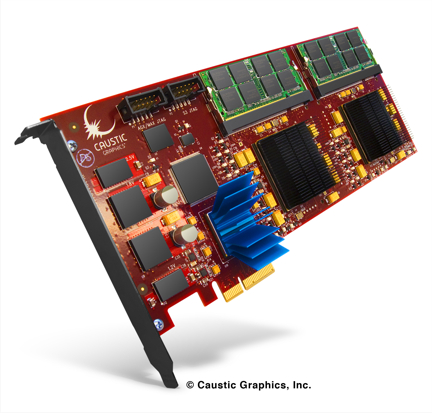