Electromagnetic analysis and antenna simulation could be the key to developing a safe setup.

Electromagnetic analysis and antenna simulation could be the key to developing a safe setup. 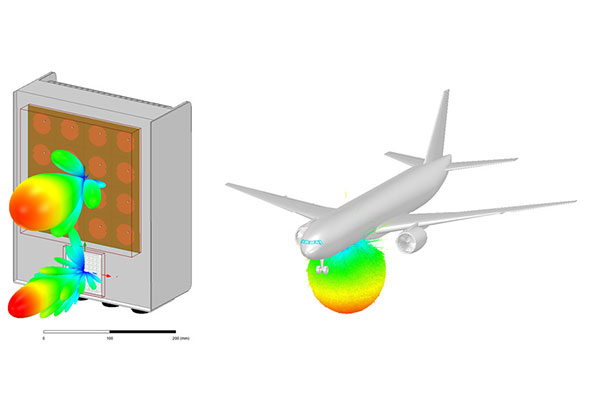 Multiphysics Simulation Illuminates the Future
Multiphysics simulation is used to improve existing technologies, as well as create completely new ones.

In mid-January 2022, chief executives from the leading airlines sounded an alarm, warning that the telecom providers’ planned rollout of 5G services could be “catastrophic” to aviation.

The telecom giants and the airlines eventually agreed “to create buffer zones for 6 months around airports where transmitters are in close proximity,” according to an FAA statement on January 16.

On the one hand 5G’s benefits, which range from better Internet of Things services to Netflix streaming. On the other hand, the safety of thousands of passengers onboard hundreds of flights must not be put in jeopardy. What is the best balance then? Simulation may play a key role to help evaluate the risks involved and possible solutions.

The concerns are mainly about how 5G might affect the functions of the plane’s radio altimeter, which allows the plane to land safely in low-visibility conditions by measuring the plane’s height above the ground. The key question that needs to be resolved is: Can the altimeter operate reliably in the 5G C-band environment?

The Federal Communication Commission (FCC), which regulates the use of radio frequency, states, “Mid-band spectrum has become a target for 5G buildout, given its balanced coverage and capacity characteristics. With our work on the 2.5 GHz, 3.5 GHz, and 3.7-4.2 GHz bands, we will make more than 600 megahertz available for 5G deployments.”

In one chapter of that order, “Coexistence with Aeronautical Radionavigation,” the FCC writes, “By licensing only up to 3.98 GHz as flexible-use spectrum, we are providing a 220 MHz guard band between new services in the lower C-band and radio altimeters and Wireless Avionics Intra-Communications services operating in the 4.2-4.4 GHz band. This is double the minimum guard band requirement.”

He adds, “Simulation can demonstrate the effectiveness of critical electromagnetic filters and help with good design to reduce interference in general. The frequency gaps or the guardrails put in place by the regulatory bodies between spectrum assignments are often based on worst-case scenarios, but simulation can help ensure that products and systems stay well within their allotted spectrum.” Running simulations early in the product design process can reduce product development time and cost, but can also help avert late-stage issues such as what is happening related to 5G. 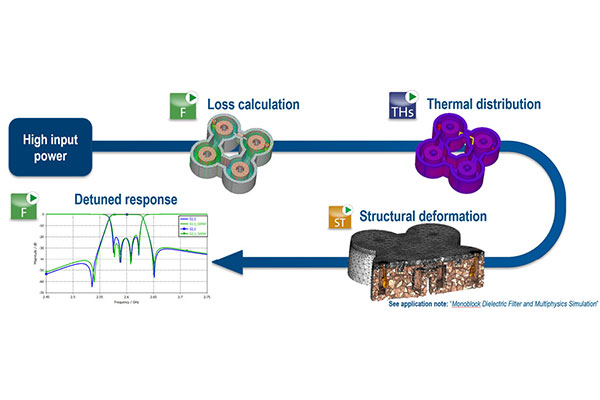 One relevant product is the CST Studio Suite for electromagnetic field simulation, part of the SIMULIA software portfolio from Dassault Systèmes’ 3DEXPERIENCE platform.

The package “includes a range of multiscale high-frequency solvers with core strengths in antenna engineering, interference analysis and certification. The software is used worldwide by leading [original equipment manufacturers] and suppliers in the aerospace and defense and high-tech industries. 5G antenna and related systems design has been a major focus of the company, at the low-power device and the high-power base station level,” according to the company.

Oakley suggests using the software to model the filters in the various equipment to ensure they will perform as required.

“High-power filters can get hot, for example, and the resulting deformation can detune the device,” Oakley points out. It can also reveal “how the radar altimeter and base station might interfere, including out-of-band signals (and possibly intermodulation products),” he adds.

Other potential analyses he proposes are:

Stakeholders may also explore potential solutions through simulation. These range from:

“CST has recently demonstrated effective mitigation of interference by means of robust RF band-pass filters,” Oakley says. “This can be demonstrated even in the worst-case scenario of a plane rollover maneuver followed by a landing on a very short runway.”

This is the domain of radar systems engineers, according to Shawn Carpenter, program director at Ansys, and more broadly, radio frequency system engineers.

“It’s also the purview of network system architects who specialize in radio frequency systems as well as the radar systems,” he explains.

Using Ansys tools, users can closely inspect an altimeter’s two possible failure modes in the 5G scenario, Carpenter says. “It might fail if it’s getting energy in its operating frequencies where no energy should show up, indicating an out-of-band emission from the 5G system. These 5G systems transmit a lot of energy, so it might also hit the altimeter and saturate the receiver.”

The second failure mode is similar to what happens to the in-car FM radio signal when the driver drives past a powerful AM station, Carpenter says. “Your radio flutters in and out, right? The AM frequencies are 100 times lower than those in the FM band. They’re way outside the specified FM receiver frequency, but because it’s so powerful and the radio doesn’t have enough power to reject that signal, it still messes up your FM signal,” he explains.

“Ansys’s acquisition of AGI will help drive our strategy of making simulation pervasive from the smallest component now through a customer’s entire mission,” says Ajei Gopal, president and CEO of Ansys. “We are excited to welcome the expert AGI team—and to expand the reach of their world-class technology to industries outside of aerospace, including for autonomy and 5G applications.”

As proof of concept, Ansys recently simulated an aircraft’s landing operation, accounting for the altimeter’s overlap with the 5G signal near the airport. For ground data, it used the King County Airfield, 5 miles south of downtown Seattle, WA. AGI comes preloaded with airport data users can pick and choose, Carpenter says. The 3D model of a Boeing 777 with an altimeter mounted at the bottom was developed in High Frequency Structure Simulator (HFSS), another Ansys package.

The same simulation completed with accurate data representing other airports, aircraft and altimeter types, Carpenter suggests, could answer some important questions, such as: “Does the 5G signal content get into the radar altimeter receiver at any point in the landing? Is the interference creating a real safety issue?”

On January 28, the FAA stated, “The FAA, Verizon and AT&T have agreed on steps that will enable more aircraft to safely use key airports while also enabling more towers to deploy 5G service.”

The agency has also approved “20 altimeters that allow approximately 90% of the U.S. commercial fleet to perform low-visibility landings at most airports in the 5G deployment,” while cautioning that “some altimeters will have to be retrofitted or replaced.”