Proposed boomerang-shaped airplane design created with ParaPy, SU2, MATLAB, ANSYS Fluent and HPC could use 20% less fuel than the Airbus A350.

The Flying V shifts the passenger and fuel load into the wings, and could operate 20% more efficiently than comparable planes. Image courtesy of TU Delft.

In October, researchers and designers at Delft Technical University in the Netherlands, in cooperation with Dutch airline KLM, will test fly a prototype of a new airplane design that could use 20% less fuel than the Airbus A350.

The Flying V, originally conceived by Berlin Technical University student Justus Benad, is shaped like a boomerang. Passenger seating and fuel storage are inside each of the wings. KLM is providing financial support and engineering expertise.

The Flying V will be able to carry 314 passengers and 160 square meters of cargo, and will have a wingspan that matches the A350 (so it can operate in existing airport facilities).

Because it is smaller than the A350, it has less inflow surface area and less resistance. The design eliminates the drag created by the fuselage in a traditional aircraft by combining the fuselage and the wing. The Flying V will also use highly efficient turbofan engines, and could eventually be adapted to use electric turbofans. According to the design team at TU Delft, it will use less fuel to cover the same distance. 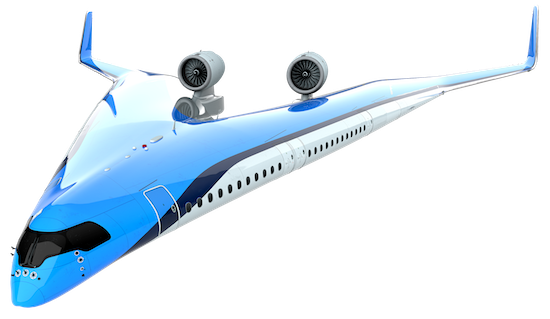 A scale-model prototype of the plane is scheduled to be tested in October 2019. Image courtesy of TU Delft

According to Roelof Vos, project leader at TU Delft, the team has used ParaPy (a spin-off company of the university) to efficiently parameterize the outer geometry and structure of the craft. For the aerodynamic analysis, they use Stanford University’s SU2, solving the Euler equations on an unstructured grid, combined with an empirical model for friction drag. Parametric optimization for maximum aerodynamic efficiency was performed by coupling SU2 and ParaPy to a gradient-based optimization routine from the MATLAB Optimization toolbox, according to Vos.

“For the analysis of the structural weight (primary structure) we have used a finite-element analysis combined with an in-house tool from Airbus for structural sizing,” Vos says. “Aerodynamic loads were also estimated using a vortex-lattice based solver that has been developed within Airbus.”

In the preliminary design phase, all of the work was done on desktop workstations. Current simulation and analysis studies leverage high-performance computing resources, and include CFD to solve the Reynolds Averaged Navier Stokes Equations using ANSYS Fluent.

“These also include the effect of viscosity and heat transfer, and are therefore more expensive to solve,” Vos says. “For benchmarking we work together with a small company, MV Aero, which performs so-called Large-Eddy Simulations.”

Vos says that the biggest design challenge was coming up with an efficient way of parameterizing the exterior geometry that contains an oval cabin design.

“The oval cabin is required to allow for a low-weight, non-circular fuselage that can be part of the wing,” Vos says.

Another key challenge was the definition of the structural layout.

“With this unconventional design, we needed to come up with a structural layout that made sense and made use of structural building blocks that are also found in tube-and-wing aircraft. Think about ribs, spars, frames and stringers,” Vos says. “It took quite some iterations and two seven-month studies to come up with a satisfactory design that could be analyzed and sized using a structural sizing algorithm.”

The team has not yet performed material selection, although current weight estimations are based on a comparison study of an A350-like aircraft.

“The weight savings we report are based on the assumption that both aircraft are made out of the same material, with the same stress allowables,” Vos says. “Therefore no new materials are required to meet the weight reduction we anticipate.”

Preparing the Prototype for Flight

The subscale prototype/model will be constructed partly from 3D-printed components, although Vos says they have not yet decided if any parts of the actual aircraft will be printed.

The model is a 4.6%-scale aircraft with skins made from glass-fiber reinforced plastic with foam panels for improved stiffness. Ribs and spars are made of a glass-fiber sandwich structure, and the team used vacuum-assisted resin-transfer-molding techniques to get a light-weight and smooth structure.

Vos says the project is currently on track for a test flight of the prototype in October 2019.

You can read more about the design of the Flying V in the team’s paper.