EDEM 2019 marks the official introduction of the EDEM multi-GPU solver engine. Using multiple GPU processors, the company explains, enlarges the maximum size of simulations that can be run on a GPU and increases performance, enabling users to run large simulations faster as well as execute simulations that would not be possible on a CPU alone.

EDEM adds that performance gains from adding a second GPU range between 30% and 90%, depending on the distribution and size of the simulation. It also notes that the multi-GPU solver has been developed using the OpenCL (Open Computing Language) framework, which provides flexibility for AMD and NVIDIA GPU cards. Further, beginning with EDEM 2019, EDEM API (application programming interface) models can now be run directly on the GPU solver, which should boost their performance.

“The EDEM API on GPU ... marks a major step towards migrating all EDEM capabilities onto GPU technology,” said Mark Cook, EDEM product manager, in the press announcement for the release. “Integrating this with the substantial performance increase achieved with the GPU and multi-GPU solvers makes for a very powerful combination for EDEM users.”

In version 2019, the EDEM solver engines have been enhanced to facilitate continuous modification of a geometry structure during simulation. The company explains that this means that geometry sections can change shape and deform with input via the EDEM Coupling Interface. This enables users to directly couple EDEM to flexible body simulations that can cover such applications as belts, sheet panels and elastic membranes, the company adds. As a result of a partnership with FunctionBay, users of RecurDyn multi-body dynamics (MBD) simulation software will be the first to be able to use this capability in a coupled simulation. 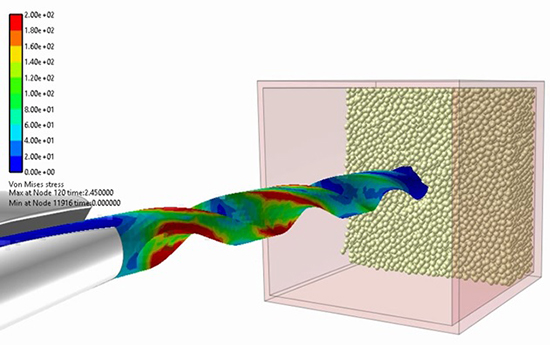 For example, EDEM says that users can extract forces acting on a specific geometry over time and compare back-to-back results between multiple simulation decks. Users can also track particles’ residence time throughout a simulation or visualize networks of contacts and bonds in new, flexible ways. Users could also visualize DEM data as a continuum or use EDEM data to calculate post-processing properties for such simulations as segregation index or tortuosity.

Version 2019 also sees the beta release of a new breakage model. This model is said to be able to describe the fracture of particles subjected to repeated loading by simulating surface degradation and body breakage. This advanced model considers catastrophic breakage due to high impact as well as surface breakage caused by abrasion, EDEM says. 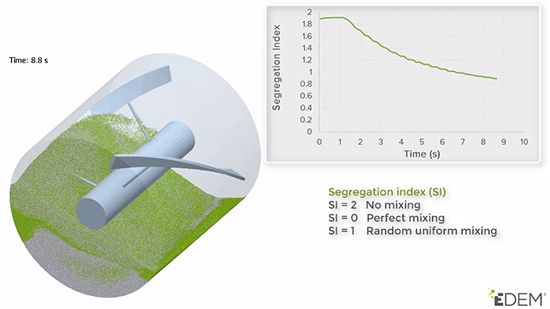 The company further explains that the breakage model is able to provide key outputs related with the weakening of the particles and their related energies before and after breakage as well as the final fragmentation and the size distribution of the fragments. EDEM says that this is the first breakage model able to address the different mechanisms of breakage including surface damage and fragmentation.

“We are seeing rapidly evolving requirements for applying EDEM to solve many industrial problems involving a large number of fine particles, notably in the powder handling industries such as additive manufacturing,” said Richard LaRoche, CEO of EDEM, in a press statement. “This means it is more important than ever to be able to simulate a large number of particles in a shorter time. With EDEM 2019 we’re excited to announce a range of capabilities that expand the applications that EDEM can address.”

For additional details on the EDEM discrete element method simulation technology and its portfolio of complementary applications, click here.

Watch a video overview of EDEM.

Go here to learn more about the EDEM breakage model.

Check out the EDEM video gallery.

Register for the complimentary “Introduction to EDEM 2019” video training course.

See why DE's Editors selected EDEM 2019 as their Pick of the Week.