This year's event drew a hands-on look at the latest advancements in multiphysics simulation. 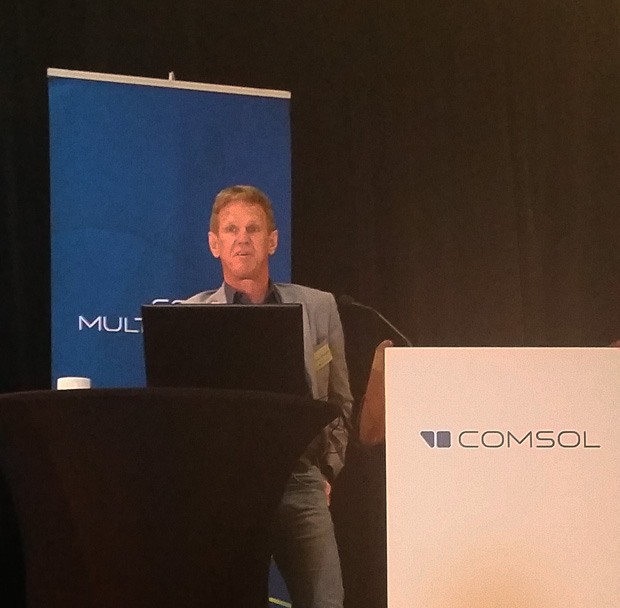 Simulation is a side to engineering that is best seen and experienced in a hands-on environment. Such was the attitude at this year’s COMSOL Conference Boston, which ran from October 5-7. Throughout the multi-day event, 275 registrants were able to access in-depth technical presentations, seminars, software and get the chance to ask the experts about multiphysics simulation.

.@COMSOL_Inc CEO Svante Littmarck starts this afternoon with a presentation on “Multiphysics for Everyone.” pic.twitter.com/hv9hiNS13L

The company is still focused on making sure that simulation is becoming available for all through its Application Builder and COMSOL Server, which it announced in 2014. “[It’s] the most exciting innovation since Multiphysics,” remarked Svante Littmarck, president and CEO. He added that the company is starting to see an increased number of new applications from COMSOL’s clients—beyond what the company originally developed as sample applications with the initial release.

In its focus on COMSOL Multiphysics 5.2a, COMSOL has provided a host of updates in speed performance, particularly in regards to model handling of designs with several thousand domains and boundaries. “We’ve been focusing on performance improvements; it’s a factor of 10 on most things, with CAD import it’s a factor of five,” Littmarck explained.

COMSOL also introduced new branding capabilities for simulation applications created with COMSOL Multiphysics and running on the Server. The goal for this feature, the company notes, is to let clients brand the technology and make it more unique to their business. Ultimately, by being able to generate a customized/personally branded user interface, this adds just another element of making these simulation apps simply an extension of the client’s business.

Other notable updates to 5.2a include an expanded Method Editor for the Application Builder, analysis tools for meshing, a weather database for the heat transfer module, magnetic vectors for AC/DC, ease-of-use for gravity forces for computational fluid dynamics (CFD) as well as less memory-intensive solvers.

“We talked about meshing at the last conference,” said Bjorn Sjodin, vice president of product management. “We introduced a new tetrahedral meshing algorithm in version 5.2. It is a dramatic shift in our ability to create meshes and is much more robust.” Sjodin added for the last few releases it’s been getting easier to create course meshes on models.

Beyond performance upgrades and user interface improvements, the newest product announced at this year’s conference was a Rotordynamics module for simulating vibrations within rotating machinery. This can be used mainly for applications within turbochargers, electrical machinery, automobile, energy and aerospace industries.

This year’s keynotes gave a look at both engineering basics and a smattering of industry applications from medical to metal 3D printing. However, even with these varying examples, presenters all focused on how simulation could help them find the simplest, most efficient design. “By making [a design] generic, you make it efficient,” explained Benard McGarvey, senior engineering adviser at Eli Lilly. McGarvey’s talk focused on applying first principles to help address the common engineering problem of two conflicting requirements within a product design.

McGarvey: It’s easy to get caught in the math of 1st principles. Here’s a higher-level explanation. #COMSOLConf16 pic.twitter.com/qg6Nd4jRH5

By using first principles, McGarvey noted that his engineering teams can help improve processes, control strategy and aid root cause analysis—three ideas that are extremely helpful when creating medical devices such as needle-based medicine systems. “You don’t have to justify first principles,” McGarvey stated.

Beyond first principles, users also saw lightweighting applications through simulation. “When designing the world’s fastest [microfluidic] valve, you want to make it light and small,” said Carl Meinhart, professor at UC Santa Barbara and president at Numerical Design. Because Meinhart works on the extreme nanoscale, he explained that numerical simulation was simply the only way to test his designs. “MEMS (micro-electro-mechanical systems) often work between the length of a half micron to the width of a human hair,” he said.

For academic and collaborative applications, Ed Furlani from the University of Buffalo and his graduate students chronicled multiple multiscale simulations. “It’s no longer accurate to just do macroscale modeling,” Furlani said. “To really understand materials [and advance applications], you need to use microscale modeling.” Through research work with HPC (high-performance computing) and COMSOL Multiphysics, Furlani’s team has been able to work on wound healing, particle-fluid interactions, computational electromagnetics and an improved liquid metal 3D printing process for Vader Systems.

This year’s keynote audience was curious about everything from a pending release of Multiphysics 5.3 to Onshape integration. While COMSOL is working on the next major release, Sjodin hinted at increased performance enhancements across the board for Multiphysics 5.3 as well as a boundary element method and new solvers for CFD.

With advancing technology such as optimization, Littmarck hinted at a developing project that would help users run automated validation on models outside the Application Builder Library, stating “there is such a project.”

From a hardware standpoint, the audience was curious about GPU-based simulation. “We haven’t seen that we can do very much. We’ve been looking at it on and off for the last 10 years,” said Littmarck. However, he did add that Multiphysics is multi-threaded for simulation applications and that even non-GPU technology is rapidly advancing. “The hardware always gets better. If you can’t change your methods, just wait,” he said.