The technology landscape for design engineering tools continues to shift and evolve. New simulation solutions for non-experts are emerging, and forward-thinking firms are starting to embrace technologies like augmented reality and generative design—or at least cautiously experimenting with them. Other solutions, like artificial intelligence (AI) and additive manufacturing, are becoming firmly entrenched in the design engineer’s toolbox.

Once again this year, we asked Digital Engineering’s audience for their perspectives on the current and future technologies that are shaping design engineering work, along with the products and systems that they are designing. 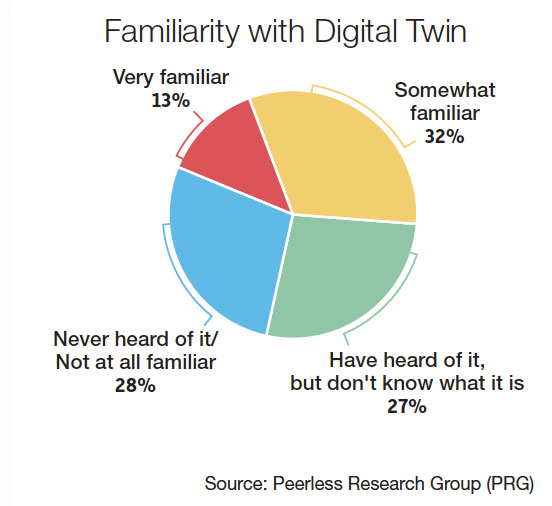 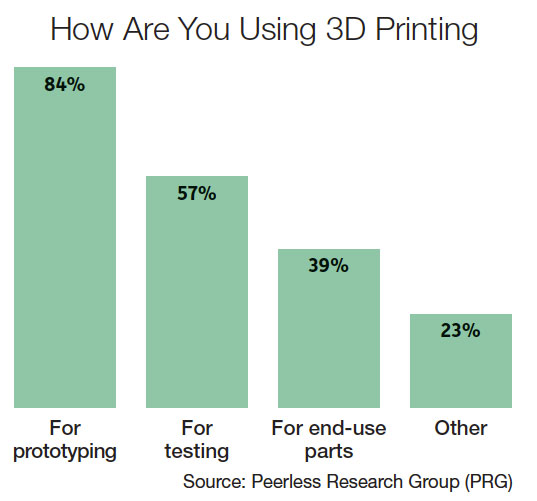 For the past two years of this survey, collaboration has been listed as an extremely/somewhat important challenge in the day-to-day work of design engineers. Collaboration topped the list of challenges again this year, being cited as a very or somewhat important challenge by 87% of respondents. The second most common challenges were short product development deadlines and inefficient workflows, which tied at 84%, followed by a lack of adequate budget (83%), a lack of training (79%) and regulatory compliance (74%).

When asked what technologies they thought would have the biggest impact on product design and development over the next five years, respondents cited AI and machine learning (51%), followed by additive manufacturing/3D printing (49%). Those were also the top two technologies in last year’s survey, although they have switched spots since 2018. 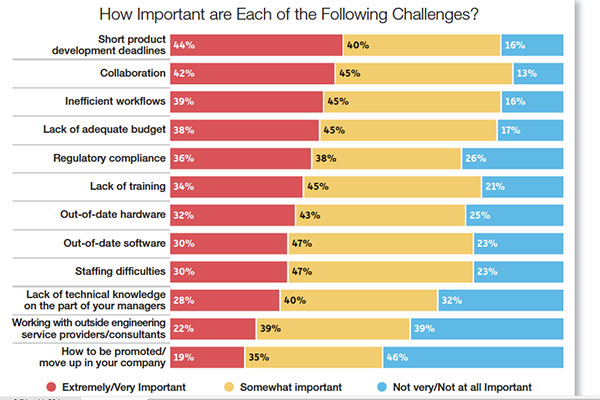 We also asked readers what technologies they were currently using or developing products for, as well as which technologies they expected to adopt or develop for in the next two years. As was the case last year, simulation software held steady as the technology that readers were most likely currently using/developing products for, with 54% of respondents reporting that they were doing so. Additive manufacturing/3D printing was second at 39%—this was very close to last year’s figures of 55% and 40%, respectively. Those were followed by the IoT (33%), PLM (31%) and advanced materials (29%).

Looking ahead, 32% respondents expected to incorporate AI/machine learning within the next two years. Predictive analytics, HPC/cloud computing, and virtual/augmented reality tools were all cited in the future plans of 29% of respondents. 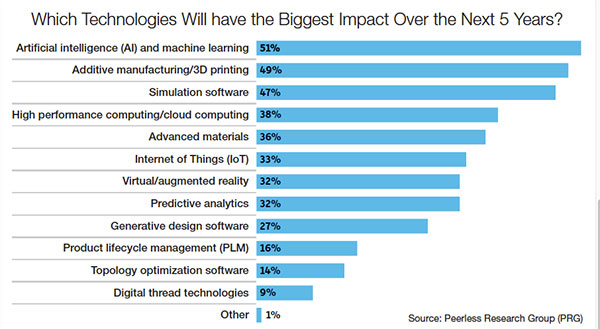 Additive manufacturing/3D printing remains primarily a prototyping tool for 84% of respondents that are already using it (a figure almost identical to last year’s survey). However, there was a slight increase in readers using 3D printing for testing (57%, up from 55% last year) and end-use parts (39%, compared to 36% in 2018). This maps to what we’ve seen and heard throughout the year, with more companies tentatively leveraging AM for creating final parts as printer performance and materials section improves.

Those that have implemented additive manufacturing/3D printing did so to shorten product development schedules (listed as extremely/very important by 65% of respondents), to reduce/control product development costs (53%), and to manufacture designs that were not feasible with traditional methods (45%).

While the use of AI is considered an important capability moving forward—both as a feature to be incorporated in new products, and as a capability critical for a new generative design process—adoption is still slow. According to the survey, 15% of respondents are currently using AI/machine learning, while 32% plan to use it within the next two years—figures that are virtually unchanged from the 2018 survey.

Asked what impressions they had of the technology, most believed that AI solutions held some promise for design, but were waiting to see the use cases proved out more effectively. AI could potentially accelerate the design cycle, improve diagnostics, increase collaboration and improve production timing.

Likewise, generative design adoption is still slowly increasing. According to the survey, just 14% of respondents are currently using this approach, but 25% plan to use it in the next two years. Those that did implement generative design did so to foster innovation in product development (63% said that was very important), to discover new designs (63%) and to shorten product development schedules (59%).

“Generative design software is very interesting. It allows you to design seemingly very complex structures which use much less material and are at least as strong as what it typically designed,” wrote one respondent. “That could be huge for materials, sustainability, cost and function/usage. Include additive manufacturing and the possibility to produce objects with much less material could be enormous.” 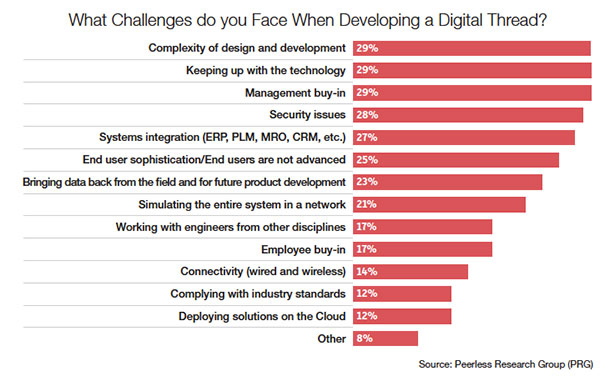 Other readers were less optimistic. “I think it is great for weight production of parts. However, I don’t think CAD software is ready to deal with the resulting geometry very well. I also don’t think that manufacturing parts based on generative design are profitable enough yet with the exception of a few cases,” another respondent commented.

Challenges to creating a digital thread included complexity of design and development, keeping up with technology and management buy-in, all cited as challenges by 29% of respondents. Security issues were also considered a challenge by 28% of respondents.

When asked what technologies were poised to revolutionize the design engineering process, the bloom appears to be slightly off the rose for some popular solutions. Just 59% agreed that wider adoption of additive manufacturing/3D printing technology would revolutionize design and engineering, down from 63% last year. Simulation-led design also dropped from 53% to 51% compared to 2018.

Just 31% of respondents agreed that the democratization of simulation would prove to be revolutionary, down from 36% in 2018. As these technologies and strategies become more common, it appears that end users may be finding them more evolutionary rather than revolutionary in practice.

Some respondents are still learning exactly what some of these emerging technologies can do. While 39% of respondents said that they were “very familiar” with simulation software, and 35% were very familiar with additive manufacturing/3D printing, there was a drop-off when it came to the Internet of Things (25%), PLM (23%) and even HPC/cloud computing (21%). That drop in familiarity was even more pronounced with more leading edge technologies like AI and machine learning, with just 14% of respondents saying they were very familiar with the technology (down from 17% last year). Virtual/augmented reality was very familiar to just 13% of respondents. Roughly a quarter of respondents were not at all familiar with generative design, topology optimization or digital thread. As solution providers continue to develop these solutions and integrate them with existing CAD, simulation and PLM platforms, there is clearly work to be done when it comes to educating potential end users.