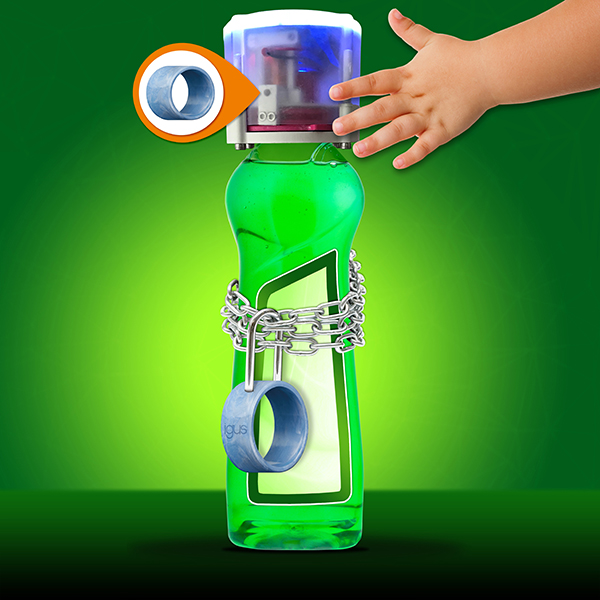 Students from a technical university in Germany developed a child safety lock for cleaning agent bottles that includes a lubrication-free bearing manufactured by igus.

Nearly 94,000 calls are made each year to the Poison Information Center in Germany for burns and intoxication of children due to household cleaners. Students at the TU Darmstadt’s Electrical and Information Technology set about finding a child proof safety lock to keep youngsters from being exposed to contact with harmful cleaning agents.

The seven-student team from TU Darmstadt, supported by igus, used an iglide plain bearing for the lock, which is screwed on to the bottle. Secure bottle access is ensured via an app. The innovative lock won second place in Cosima, a prominent German student competition for microsystems. igus is headquartered in Germany and conducts its North American operations out of Providence, RI. The Young Engineers Support (Y.E.S.) program at igus assisted the students. The iglide A350, the bearing used in this application, is frequently used in food, medical and packaging industries.

The safety device is, for the most part, 3D printed and consists of a housing, which is placed over the lid of the cleaning agent bottle. It engages with a cover plate under the plastic ring of the bottle. Using a lever, the cover plate can be moved manually and the device can be secured.

The closing mechanism consists of an electrothermal actuator. Its current feed heats and deforms so that the safety device opens and can be removed from the bottle. The actuator is attached to a pin. By turning the lever, the pin mounted with an iglide plain bearing engages and prevents an unauthorized opening.

To open the backup, a self-programmed app is used, which gives the device an opening signal after a password request. The actuator is energized by a power control and heats up. The heating deforms the material of the actuator and the pin is pulled out of the fuse. The device can be opened and removed from the bottle. Access to the cleaning agent is guaranteed. After using the cleaning agent, the device is re-inserted over the lid of the bottle and activates the locking mechanism. The device is then protected against unauthorized access and thus prevents children from ingesting the harmful content.

“We approached the Young Engineers Support from igus with our project because we were looking for a bearing that has a low coefficient of friction and is resistant to acids and alcohol,” says Ida Blum, a member of the product development team. “In addition, the bearing must withstand temperatures of up to 125 degrees Celsius due to the heating of the actuator. That's why we chose iglide A350.”

A History at Darmstadt

TU Darmstadt is a research university in Darmstadt that was founded in 1877. It was the first university to create a chair in electrical engineering, and its alumni include two Nobel laureates. More than 26,000 students attend the University.

“When researching bottle and canister closures, we were astonished to find that while there are some anti-theft counterfeiting models for retailers, there are no safeguards against accidental or abusive use, other than known mechanisms such as push-and-turn closures,’’ the students wrote on the competition website.

The students said data from the Federal Institute of Risk Assessment shows poisoning and chemical burns caused by detergents, disinfectants and pesticides are the most frequent causes of accidents involving children between the ages of 7 months to 4 years.

Projects such as child safety lock are supported by igus as part of the Young Engineers Support program. The initiative supports young pupils, students and inventors in the development and execution of their technical projects with free products, expertise and catalogues.