NVIDIA and ASUS are pitching the ASUS ProArt StudioBook One as a mobile system for “creatives and innovators.”

NVIDIA and ASUS are pitching the ASUS ProArt StudioBook One as a mobile system for “creatives and innovators.” 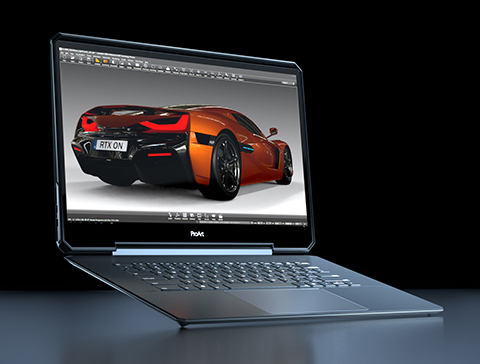 NVIDIA and computer maker ASUS jointly announced the launch of the ASUS ProArt StudioBook One, a mobile workstation powered by NVIDIA RTX 600 GPU.

NVIDIA and ASUS are pitching the ASUS ProArt StudioBook One as a mobile system for “creatives and innovators.” According to NVIDIA’s own benchmarks shared during a conference call hosted by the GPU maker, the system performs within a mere 10% difference to high-end desktop workstations.

“The design goal is to get a high-end desktop’s performance in mobile form actor,” adds Bourgoyne. “Besides, it’s sleek and thin, something you can carry around. It doesn’t do you any good if we design something that matches the workstation in performance but is bulky and heavy.”

The previous generation RTX GPU—NVIDIA RTX 5000—has a maximum built-in memory of 16GB. By contrast, the RTX 6000 GPU can accommodate up to 24GB, significantly increasing the data size for working files.