Reaching for the Stars, Privately 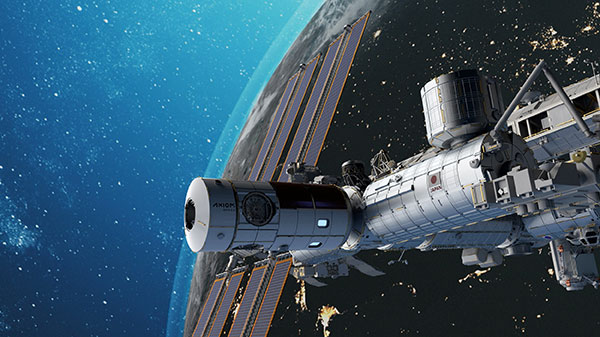 When he assumed the role of Captain Kirk in the first “Star Trek” TV series in 1966, actor William Shatner, age 35 at the time, probably didn’t imagine he would actually get a chance to go into space.

A Cautionary Note on Spacecraft FEA

As more private firms join the race for space, the use of finite element analysis (FEA) software to simulate and perfect the design of spacecraft is expected to grow. Can heavily automated FEA solutions adequately address the complexity of space travel?

He writes, “In a way, modeling involves knowing the answer before you get it. So unless you have experience, you don’t know where to put the fine mesh.”

Yet, 56 years after the series’ first episode, the 90-year-old Shatner blasted off into space aboard Blue Origin’s New Shepard launch vehicle spacecraft. The flight—which “lasted just 10 minutes from takeoff to landing and gave the passengers about three minutes of weightlessness,” as reported by CNN—wasn’t exactly a grand adventure. Nevertheless, it exemplifies what many are calling the privatization of space.

“The Commercial Space Age is Here,” declared a Harvard Business Review article’s headline in February 2021. “In the first stage of this burgeoning economy, private companies must sell to NASA and other government customers … But as SpaceX has demonstrated, private companies now have not just the desire, but also the ability to send people into space,” the authors wrote.

Once an exclusive domain of government agencies, space is now open for business. For design and simulation software providers, it suggests an opportunity to cater to emerging aerospace firms literally aiming for the stars.

The SpaceX’s relationship with Siemens Digital Industries Software (formerly Siemens PLM Software), goes way back to 2008, when the aerospace firm began using NX for CAD and CAE and Teamcenter for product data management. 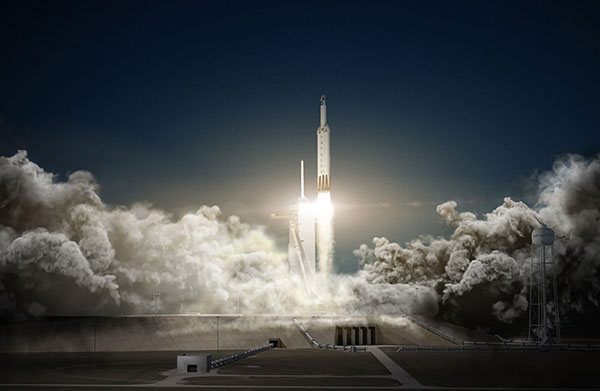 SpaceX Falcon Heavy rocket and the Dragon capsule during a launch. Image courtesy of SpaceX.

In a case study published by Siemens, the company revealed SpaceX modeled the Falcon 1 and Falcon 9 rockets and the Dragon capsule in NX. Chris Thompson, VP of structures, SpaceX, said, “The entire [25,000-part] assembly takes only five to 10 minutes to load.”

In 2012, SpaceX turned its eyes toward composite materials. The firm brought onboard another product by Siemens: Fibersim to design and simulate composites.

In the Siemens case study, Derek Lies, structural designer for composite panels, said, “Fibersim enables us to work in parallel between design and manufacturing, which is very important to us since we’re such a fast-paced organization.”

In early 2018, Musk stirred up more excitement as he shared on Instagram a photo of his new Mars-bound rocket.

“The dimensions match Musk’s latest description of the Big Falcon Rocket spaceship. Likewise, the spinning backs up SpaceX’s plan to build the spaceship almost entirely out of carbon fiber: a super-lightweight, ultra-strong material,” noted Business Insider (“Elon Musk just unveiled a giant tool SpaceX will use to build the biggest and most powerful spaceship in history,” April 2018).

Though only a few months later, Musk changed his mind and opted for stainless steel instead of carbon fiber.

Composite supplier Rock West offered possible reasons for the switch: “While carbon fiber stands up extremely well to temperature extremes here on planet Earth, it wouldn’t do so well during atmospheric reentry. It just doesn’t stand up to that much heat … The other concern was cost. SpaceX determined that it would spend upwards of $130,000 per ton to use carbon fiber as the primary rocket body material. On the other hand, it would spend just $2,500 per ton for stainless steel” (“We Now Know Why SpaceX Abandoned Carbon Fiber,” March 2020).

On Thursday, January 13, 2022, at 10:25 a.m. EST, the Falcon 9 took off on its 10th launch, carrying Transporter-3, a dedicated Smallsat Rideshare Program mission, from the Cape Canaveral Space Force Station in Florida.

Founded in 2016 by former NASA program manager Michael Suffredini, Axiom Space focused on providing low earth orbit (LEO) flights. For its second flight to the International Space Station (ISS), tentatively scheduled for the second half of 2022, the company has recruited retired astronaut Peggy Whitson to be onboard. 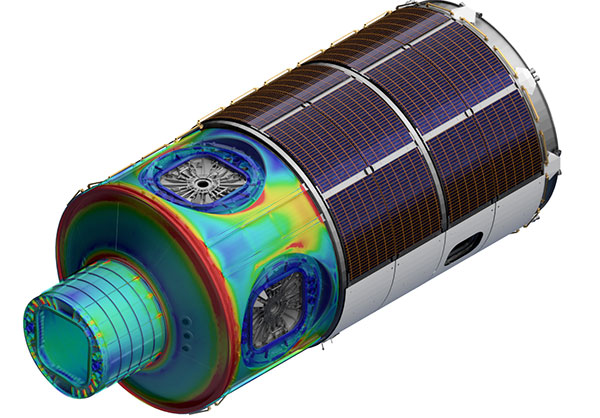 As part of the simulation software maker Ansys’s startup program, Axiom gets access to, among other things, Ansys Fluent, a fluid dynamics simulation program. “As a startup you are always looking for deals, because funding is limited in the early years,” says Matt Ondler, CTO of Axiom.

Axiom engineers rely on a thruster powered by oxygen and methane to bring Axiom Hub One to the ISS, according to the Ansys case study. The thruster’s efficiency is measured by a variable called the “specific impulse.” The higher the specific impulse, the less fuel is consumed for a particular change of velocity.

One method to maximize the specific impulse is to mix methane and oxygen molecules as thoroughly as possible.

“We run Ansys Fluent and get simulation results and we build that solution and test it to see how it works and then iterate between simulation and testing,” says Ondler. “Maximizing the specific impulse of the thrusters trickles through the whole system—the more efficient the specific impulse the smaller you can make the fuel tanks; the smaller you can make the tanks the more margin you have on the vehicle itself and it just propagates through the whole spacecraft.”

Another critical design consideration is the structure of the hub that will attach to the ISS. The 60,000-lb. module must function as a research center and living quarters for the astronauts. 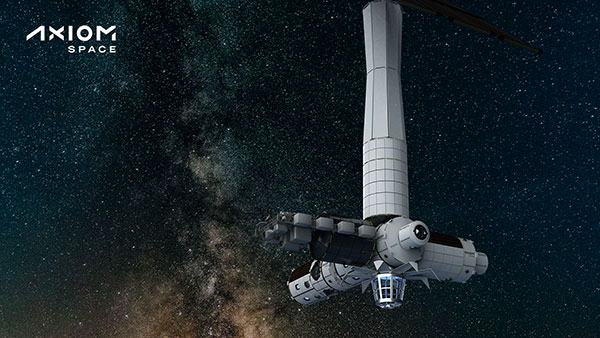 “These modules are massive pieces of hardware, and when you have pressure inside and vacuum outside, they stretch and swell and bend,” Ondler explains. “We’re using Ansys Mechanical to help us understand all those attributes: how it bends, where the stress points are and where we might need to change the design.”

Tested on Earth, Made for Space

Interstellar is not just the name of a sci-fi film involving time travel—but also the name of a real place on earth. A partner of NASA, the French-American startup Interstellar Lab designs and develops environment-controlled pods to generate and recycle food, air and water to support inhabitants. The company envisions these pods as sustainable living spaces on earth, and in the future, in space. Its first product is the BioPod, a crop cultivating module.

“Many tools today allow for an innovative approach and support the modern data flow load,” says Jim Rhoné, Interstellar Lab’s chief product officer. “But very few integrate all our constraints within a single platform. We are a company at the cutting edge of a lot of disciplines, skills and applications—biology, aerospace, control systems, architecture, mathematics and materials science. We needed a platform that could bring all these areas together. The 3DEXPERIENCE platform does exactly that.”

The firm is part of Dassault’s program called Reinvent the Sky, which caters to startups, small and midsized companies.