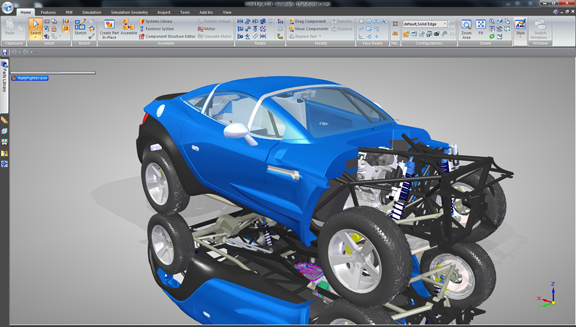 An unorthodox automotive manufacturer and a new CAD software distribution model are about to come together.

Siemens PLM Software is launching a new edition of Solid Edge, created exclusively for members of Local Motors. The trimmed down version of Solid Edge is dubbed Design1, available for a subscription fee of $19.95 per month in a node-locked configuration (to be installed on a single machine) to those who're involved in Local Motors projects.

In today's announcement, Siemens PLM Software explains, “Local Motors and Siemens PLM Software are making available, for a limited time, a downloadable trial of Solid Edge Design1. The trial is being made available now through the end of the year to select Local Motors community members. The entire global community will then be able to purchase Design1 subscriptions starting Jan 1, 2012. “

The two companies are also delivering a free 3D viewer for the Local Motors community, which will let members exchange and view project files in Siemens PLM Software's lightweight JT format. Files supported by Design1 include Parasolid, STEP, IGES, SolidWoks, Inventor, and Pro/ENGINEER. (But don't expect to be able to pass files between commercial versions of Solid Edge and Design1. You'll run up against licensing restrictions, according to Siemens PLM Software officials.)

Local Motors is pioneering a concept called open-source automotive design. Members of the Local Motors community submit car design ideas, or help refine others' design—a process dubbed “co-creation” by the company. The most popular design, usually decided by votes, will be built into a functional, one-of-a-kind vehicle at one of Local Motors' micro factories. (The company currently has one in Phoenix, Arizona, but it promises more locations are on the way.)

Unlike a mass-produced car, you may choose to custom-design nearly every aspect of your car, from its skin to its shape. The process is also appealing to the tinkerer-inventor types, who take pride in personal creations. You may also sell your creation through Local Motors' site, perhaps to those who're enamored with your design, but don't have the time or the inclination to sweat through the manufacturing process.

Think this is all too experimental? The Defense Advanced Research Projects Agency (DARPA) doesn't seem to think so. DARPA has used Local Motors to host a design challenge, to solicit ideas for an Experimental Crowd-Derived Combat-Support Vehicle. The winning entry, 22 Flypmode, came from Victor Garcia, a professional designer and an Art Center College of Design graduate.

Siemens PLM Software's Design1 subscription licensing is strictly confined to Local Motors members involved in projects. (This may sound limited, but let's not forget: With 13,000 members in its pool, Local Motors community could become a steady stream of revenue.) The company continues to sell Solid Edge and its other CAD and PLM software titles through authorized resellers. However, with its investment in the infrastructure required for subscription licensing, Siemens PLM Software may be testing the waters to determine the subscription model's viability.