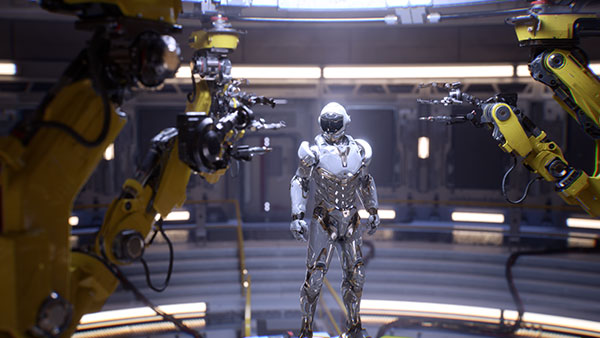 Reimagining the Iconic Japanese Sword Handle and Display Stand with Generative...
Japanese designer Yasuhide Yokoi uses Autodesk Fusion 360 to reshape an iconic weapon
Countermeasures for the Great Resignation
AR/VR-based training could be the antidote to recruitment and retention blues.
Expediting Engineering Design via Software
As software-driven automation continually drives the industry forward, expect increased efficiencies and effectiveness.
Analytics: The Next Piece of the Digitalization Puzzle
Data collection is not enough; companies must have the right framework and tools in place...
More Features

Large assemblies are an unavoidable part of CAD modeling. You may work on separate parts and subassemblies most of the time, but once the design nears the final stage, you’ll have to tackle the beast—load the detailed assembly to examine how all the different pieces and parts fit together.

Dell Precision workstations can be configured with NVIDIA GPUs to speed many design engineering tasks, such as simulation and rendering. Image courtesy of Dell.

On the Autodesk Inventor Forum, in a post titled “System Hardware and Large Assemblies,” the author wrote, “It is recommended that you use a DirectX11 graphics card with at least 2GB of video RAM. Some Inventor users prefer a workstation level graphics card …, which perform better than consumer level cards.” (February 14, 2019)

The widely adopted mechanical CAD program SolidWorks has a Large Assembly Mode, designed to speed up assembly performance. When this mode is turned on, the software employs a number of strategies to reduce the graphics workload. It involves foregoing non-critical display features to make the dataset lighter. For example, the software suspends high-quality transparency and automatic highlighting of selectable areas during certain operations. These tricks help the assembly respond without delay when you rotate, zoom or pan.

Consider, for example, the memory capacity of NVIDIA RTX 5000 vs. RTX 6000, both part of the NVIDIA Quadro professional GPU line. The former, RTX 5000, has 16GB GPU memory. In contrast, the latter, RTX 6000, has 24GB GPU memory. The roomier memory makes a difference in handling large files for raytracing, simulation and other GPU-intensive operations.

One way many CAD users have chosen to work with large assemblies is by splitting the viewing environment onto multiple displays. For example, you may use one display for part modeling, and another to view the overall assembly. This allows you to view in real time how the geometry changes and edits at the part level affect the assembly’s overall structure and inter-part mating relationships.

The ability to simultaneously view both perspectives—the part-level view and assembly-level view—is expected to increase productivity. It does so by cutting down the need to minimize one window to launch another, or to toggle between two open windows to access the desired view. Multiple display setups are usually powered by professional GPUs. The latest NVIDIA RTX 6000 GPU, for example, supports up to four displays.

The advantage of AR-VR viewing is the ability to see the entire assembly in real-world scale, as if you were standing in front of it. The feature may not make a difference at the part level, but for visualizing oversize factory equipment, an airplane seat or a full-scale vehicle, for example, AR-VR proves far more effective than the 2D monitor in conveying the sense of true scale. With AR, you also have the option to view how a product that only exists in pixels will fit in the real world. For instance, by superimposing the CAD assembly of a factory equipment onto the floor of the factory where it’s intended to be installed, you can identify potential clashes and collisions.

The increased processing power and memory footprint in the GPUs continue to push the ease with which you can load, view and edit large assemblies. It’s conceivable that, in the near future, using software-driven tricks to reduce the burden in assembly view will be no longer necessary.