University of Tennessee to Get Supercomputer Under Landmark Award with IBM 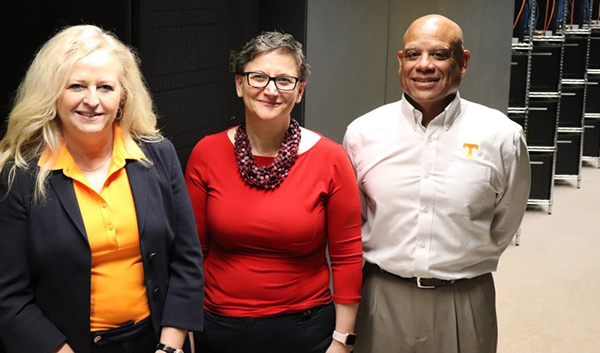 From left, general manager of Systems Strategy and Development for IBM Jamie Thomas stands with the University of Tennessee’s (UT) Dongarra professor Michela Taufer and John Fisher distinguished professor Mark Dean following the announcement that IBM and UT’s Tickle College of Engineering had reached an agreement resulting in the awarding of supercomputer technology to UT. Image courtesy of University of Tennessee.

UT’s Tickle College of Engineering has announced an agreement with IBM that includes the award of high-performance computing hardware based on the same technology as what is reportedly the world’s most powerful supercomputer, Summit, at Oak Ridge National Laboratory.

“Computer science and engineering play critical roles in an ever-changing world, contributing innovative solutions to smart connected products and systems for transportation, health care, sustainability, security, manufacturing, energy production, and learning,” says Janis Terpenny, Wayne T. Davis endowed dean’s chair of the Tickle College of Engineering. “Our relationship with IBM has allowed our faculty and students to flourish in these vital areas, while at the same time providing the company the data it needs to drive future decisions. ”

“IBM has a long history of supporting academic and industrial partnerships through diverse initiatives,” says general manager of IBM Systems Strategy and Development Jamie Thomas. “It’s particularly important to educate the next generation of data specialists, and to give them the opportunity to work on a system with a similar architecture to the world’s most powerful supercomputers.”

The agreement was spurred on by former interim dean, Mark Dean, who is an IBM Fellow and holds three of the company’s first nine patents related to personal computing.

Where Summit takes up a warehouse-sized space, UT’s system will be located in the Claxton Complex, giving exclusive access to the same IBM POWER9 technology at a scaled-down level.

While being one of the few universities to have a version of this powerful computer holds obvious benefits for UT, IBM also gets hands-on, real-world feedback from UT as research and experiments conducted on campus help improve and extend the computing giant’s understanding of how to guide the next generation of supercomputers.

It’s just the latest sign of strength in the department, with several faculty members who are involved with UT’s new computing system playing prominent roles in the field, in addition to the aforementioned dean, who now holds an emeritus position:

Distinguished professor Jack Dongarra, who was recently named a member of the Royal Society, is known around the world for his expertise and his annual ranking of the world’s fastest computers;

Dongarra Professor Michela Taufer has served in several international roles and is currently the chairperson of SC19, the International Conference for High Performance Computing;

“This new IBM cluster will help us explore and push the boundaries of high-performance computing at UT,” Taufer says. “Jack, Greg, and I all bring different expertise, ideas, and research in our department that this will help more closely align, in addition to the collaboration opportunities it is creating with the Bredesen Center for Interdisciplinary Research and Graduate Education, with UT Chattanooga’s Sim Center, and Oak Ridge National Laboratory.”

Additionally, other faculty members in the department are pushing different advancements such as edge, cloud, and neuromorphic computing, data analytics and machine learning and the development of new computer architectures.

This is the latest announcement in an ongoing relationship between IBM and UT, including the 2016 launch of the “Advanced Analytics Lab, IBM Enabled,” giving students in engineering and the Haslam College of Business better access to big data and its related research.