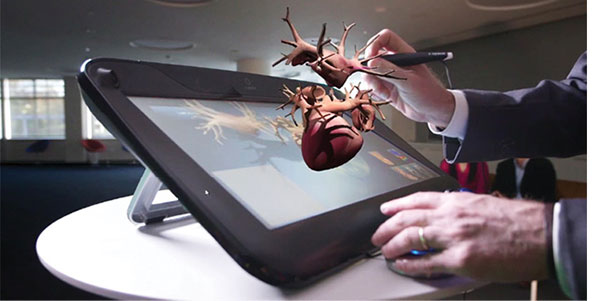 Virtual reality (VR) is nothing new. In 1838, scientist Charles Wheatstone positioned two photographs opposite one another with a set of perpendicular mirrors in between, thereby inventing the first three-dimensional images. He dubbed his invention “stereoscopy.”

A century later, pharmacist and photo-finishing entrepreneur Edwin Mayer and two business partners capitalized on Wheatstone’s idea with the View-Master, a stereoscopic device that many of us played with as children and that is still sold today. With it, users learned about dinosaurs, toured the Hoover Dam and viewed photorealistic—but static—scenes from “Star Trek” and other favorite TV shows.

Since then, the virtual world has become positively real. Surgeons use VR headsets and haptic gloves to practice on anatomically accurate models of their patients. Jurors visit virtual crime scenes, shoppers tour virtual department stores and astronauts fly through virtual space in virtual spacecraft. And if you’re a product designer or manufacturing engineer, chances are excellent that you’re already collaborating on projects and visiting the production floor via VR.

In fact, the virtual world has become so important that Joel Breton, president of Sixense Studios, the software development studio of immersive computing solution provider Sixense Enterprises, can list off dozens of industrial applications for augmented reality, VR and mixed reality technology, each of which makes a strong argument for its use.

“We conducted a market survey recently and discovered that there are at least 10 and potentially up to 15 different verticals that can benefit from immersive computing applications,” he says. “When you consider that we’re still in the early days of the adoption curve, I like to think of it as a big blue ocean of opportunities.”

VRSim, one of Sixense’s partners, is a virtual reality and simulation training company that uses Sixense’s “full presence” technology in its products. SimSpray, for example, is a VR spray paint and coating simulation tool that is said to cut training costs in half, while VRTEX 360—a welding simulator developed in partnership with Lincoln Electric—promises to teach even advanced welding processes in 23% less time and with certification levels 41% higher than traditional methods.

The potential for VR training extends well beyond factory applications, however. Breton says the technology is suitable for use cases such as healthcare, consumer sales, data protection and human resources. “I could probably stay busy for the rest of my life creating immersive training applications,” he laughs.

But the setup isn’t just a fancy pair of glasses and some cool video. VR/AR training environments work because they allow the user to immerse themselves in a wholly realistic—but artificial—world; one that responds to their hand gestures and body movements with accurate feedback.

“Research has shown that our memory processes spatial information better than it does verbal or written,” Breton explains. “You might struggle to recall the name of someone you met this morning, but you can easily remember the layout of a room you visited last year. VR training leverages this phenomenon by physically immersing someone in the subject matter. This not only gives them the visual stimuli needed to remember certain activities and tasks, but helps them to develop the necessary muscle memory as well.”

VR training also gives people a chance to gain skills that might otherwise be learned the hard way. Guillaume Donval, senior innovation lab architect for SIMULIA at Dassault Systèmes, suggests that future automobile simulators would allow students to navigate a flat tire at highway speeds, drive through inclement weather or even experience a crash.

Though scenarios like these offer tremendous learning opportunities to those who survive them virtually, they also give product designers and engineers the chance to see how end users react under certain conditions.

Have a Virtual Heart

“This sort of immersive review is a great tool to understand the complete user experience, and improve product designs based on that information,” says Donval. “That’s why we’ve integrated VR and AR into the design process as a whole, from the initial concept stage through to manufacturing, product testing, deployment and even marketing. The technology allows us to close the design loop, going from the virtual world to the real one and then back to the virtual again.”

It’s also a great tool to connect each of these processes, Donval notes, and improve communication between team members. Rather than attempt to describe a problem area within a mechanical component or brainstorm how to best layout a production line, team members can simply don AR/VR headgear and take a virtual stroll.

Once there, they might disassemble the digital twin of an automobile chassis, look inside a gas turbine engine while it’s under power or move heavy machine tools around with alacrity. These learning and sharing activities can be done from anywhere in the world, bringing together disparate design teams, maintenance crews, production workers, customers and investors like never before possible.

Dassault Systèmes is quite active in the medical field as well, where AR/VR technology does more than reduce training costs and improve communications; it saves lives. In collaboration with the U.S. Food and Drug Administration and leading hospitals and universities, the company plays a significant role in the Living Heart project, creating virtual replicas of the human heart that can be used in many ways, but especially for training.

Ian Fisher isn’t analyzing any virtual hearts, but he agrees on the importance of an accurate digital twin. A senior technical architect at Siemens Digital Industries Software, Fisher says that digital twins give people the ability to make informed and data-driven decisions. It also allows them to learn and adapt from the digital twin, and to enhance and improve it in the process, thereby anchoring the digital twin to the real world. 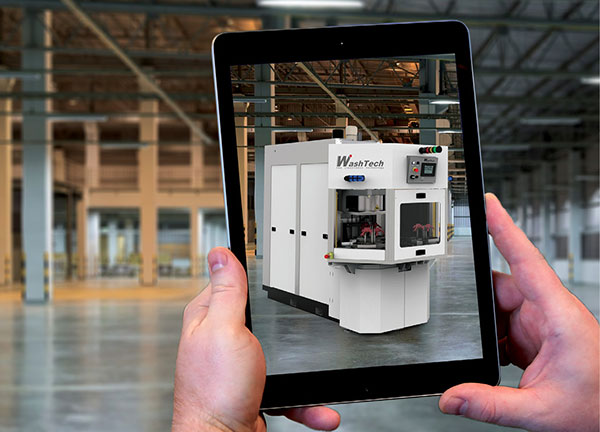 AR allows virtual objects to be placed atop the real-world environment, as shown in this example. Image courtesy of Siemens Digital Industries Software.

“The value of any digital twin is determined by the quality of interaction between the people who are using it and the digital twin itself,” he says. “And in terms of training, that interaction is probably best expressed with augmented reality, where a user can see virtual objects—a schematic, for example, or an assembly diagram—laid on top of the real-world environment. Here, even an inexperienced technician can take this technology onto the shop floor or into the field and effectively engage with [their] physical surroundings and the virtual model at the same time.”

Considering the challenges that the manufacturing industry faces with finding, training and retaining skilled employees, the ability to guide technicians through an assembly or setup procedure via AR is invaluable. Just as important, though, is what Dassault Systèmes’ Donval mentioned earlier—the ability to close the loop.

In the case of a maintenance application, for instance, an AR-equipped technician can be guided through the steps needed to service a piece of equipment, in some cases following the bouncing ball or highlighted parts on their headset until the repair is complete.

Though that may sound cool, what’s even more cool is the opportunity to provide real-time feedback on the observations or challenges encountered during said procedure. In a cloud-based AR/VR environment, this information is automatically routed to the manufacturer or product designer, providing endless opportunities for continuous improvement.

“Augmented reality allows us to show virtual objects in a physical context,” Fisher says. “This is especially relevant to field support, where you can bring spatial and location-based information into the digital twin. I think that’s huge. I think that’s where a lot of businesses really want to be.”