Autodesk BUILD Space: A Space to Build Collaboration and Companies

The Autodesk BUILD space's 200+ residents have access to expertise and training on free Autodesk software and just about any machine they might want to help make their digital designs into reality.

After asking if it was in the Seaport, my Lyft driver assured me he knew where we were going. The map app on his phone was set to give turn-by-turn directions in his native Chinese, and though I couldn't understand it, I could tell he was ignoring the female voice's incessant instructions to turn left. I checked the map app on my phone and watched our estimated time of arrival change from 15 to 35 minutes, then back down to 12 minutes all in the span of 30 seconds as we wove through Boston's traffic, and in and out of daylight via some of the city's many tunnels.

We arrived at Autodesk BUILD Space a few minutes early. I guess it pays to trust in someone who has already been where you're going. That's one of the ideas behind Autodesk's Technology Centers, which host academia, industry and startup teams from outside the company along with Autodesk researchers and customers. The goal is to encourage collaboration among people with different perspectives in a combined workshop/development/office space they can use to create innovative products.

The company has four such centers, which include the two-year-old, 34,000-sq.-ft. Boston BUILD Space that focuses on architecture, engineering and construction; San Francisco's Pier 9 that concentrates on design and digital manufacturing; one in Toronto's MaRS innovation hub geared toward emerging technologies, and one in Birmingham, UK, that specializes in advanced manufacturing.

The BUILD space's 200+ residents have access to expertise and training on free Autodesk software and just about any machines they might want to use to help make their digital designs a reality: robotic arms, water jetting, 3D printers, CNCs, routers, and more. Much of the equipment stands on mobile bases, allowing for the mini factory/lab area on the ground floor to be reconfigured to maximize flexibility.

“Free access to software and equipment removes the cost overhead of research and development,” said Nathan King, BUILD Space research strategist and projects lead as he and Athena Moore, BUILD Space community manager, pointed out the space's equipment and prototypes—including a giant archway of foam blocks that were cut by a robotic arm as a way to investigate new construction methods. “This allows them to invest in personnel and knowledge, rather than in equipment and infrastructure. They can prove out the value of the technology before investing in it.” 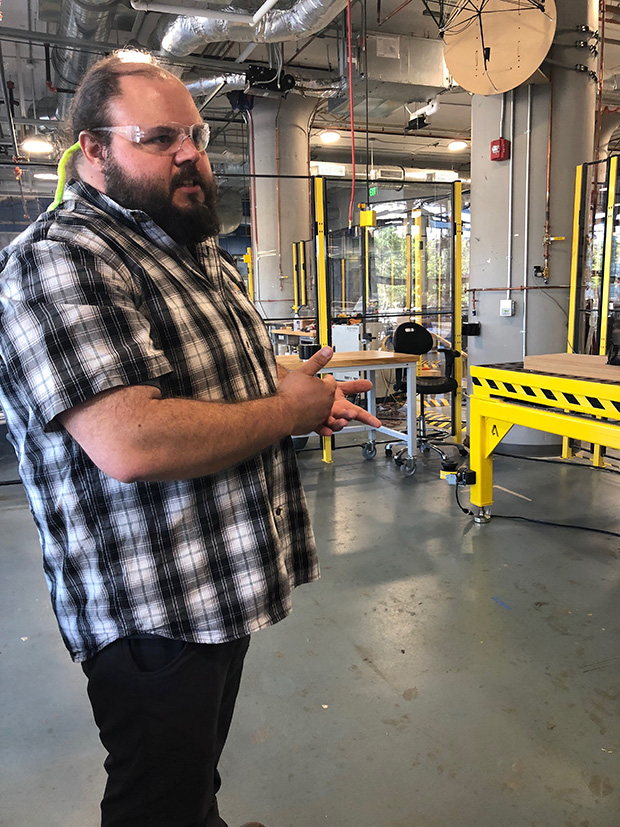 But it's not just the residents who benefit from the arrangement. Autodesk software developers can work with residents to better understand their pain points, and work with equipment providers to learn the ins and outs of the machines. That knowledge then has a direct effect on future software releases intended to solve those pain points and make use of those new capabilities.

“We get to see, first-hand, what's happening. It makes us part of the conversation,” said Moore, as we headed upstairs to visit with some of the residences, pausing on the landing under an enormous 3D-printed light fixture. “Some of the direct feedback we get leads us to a line of thinking we might not have thought to explore.”

Putting people with different skill sets and perspectives under one roof can lead to a number of forward-thinking ideas that might not have been developed otherwise. For example, on the second floor, which houses meeting rooms and office spaces surrounded by enclosed wood shops, metal working and machining areas, we met Braden Leonard, founder of Hand Made Prosthetics.

Leonard, who was a firefighter, lost his right hand to a flesh-eating bacteria four years ago after a mountain biking accident. An avid outdoorsman, he wasn't satisfied with the durability and performance of prosthetics on the market. Leonard wanted a prosthetic that was useful for active people, leading him to develop the bartender, a riding attachment designed to help people with prosthetics ride bicycles and motorcycles.

“There's a big disconnect between designers and users in the prosthetic industry,” he said. 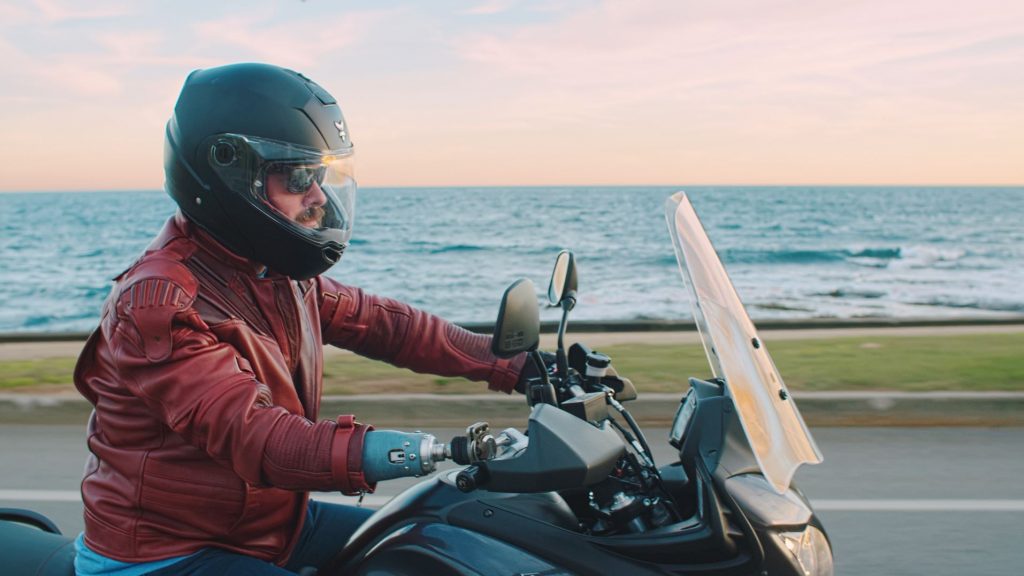 Braden Leonard, founder of Hand Made Prosthetics, rides with the use of the bartender, which he designed at Autodesk Build Space. Image courtesy of Autodesk.

In the BUILD Space, he and friend Micah Reyes, a designer and managing director at Outradius, were meeting with Mike Nunnery, Leonard's partner in Hand Made Prosthetics who is also the owner of Nunnery Orthotic & Prosthetic Technologies. Leonard had no prior experience with design, 3D CAD software, 3D printing or machining before developing the bartender.

“Now he draws his own stuff in 3D,” said Reyes, who has been helping Leonard with designs. “He's good enough to do it on his own.”

Working in the BUILD Space allowed Leonard to learn design software and to use 3D printers. “The shop tools and staff have been a great resource,” he said.

Leonard is now taking what his team learned from bartender and using it to develop a prosthetic capable of handling larger loads and tackling the “sloppy steering” inherent in prosthetics that don't match up with the limb's twisting motions. To build awareness and inspire others, he is raising funds to film a cross-country motorcycle trip. Watch the trailer below. 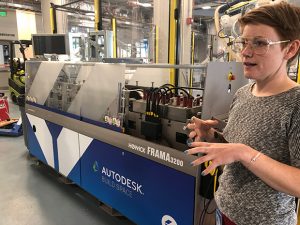 At another desk in the BUILD Space's open-concept second floor, Matt Hirsch, CTO/co-founder of Lumii, explained how he was developing a 3D hologram that could be cost-effectively printed on standard presses. The hologram could add a layer of security to legal documents, drivers licenses, or even money. Hirsch has been a resident of the space since it opened.

“The goal is to grow the company out of the BUILD Space,” he said. One way to meet that goal is via the connections made at the BUILD Space, which regularly hosts tours. “We've met a lot of people here who have been influential in the industry.”

The products Hirsch and Leonard are developing may seem to stand out among the architecture, engineering and construction projects other BUILD Space residents are working on. However, the innovative technologies and disruptive possibilities put them on the same page as Negar Kalantar, assistant professor at the Department of Architecture at Texas A&M University, or New American Public Art's Kempelen’s Owls public art installation.

“Success looks different for different teams,” said Autodesk's Moore. “We're here to support their goals. Being in this space can change their thinking.