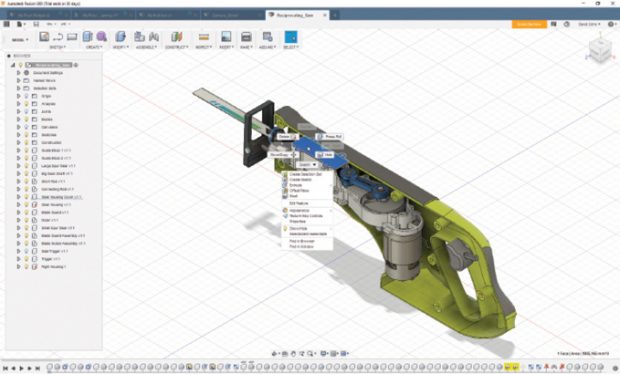 Tools in Autodesk Fusion 360 are organized into task-specific workspaces, keeping the interface simple. Right-click to access a marking menu. Image courtesy of Autodesk.

Technology Focus: Generative Design
In this Special Focus Issue, we take a look at the expanding world of generative...
Sponsored Content

Back in 2012, Autodesk introduced Autodesk Inventor Fusion as a technology preview, a free extension to its Inventor software that ran on Macs and PCs. Inventor Fusion offered solid and surface modeling tools, and supported parametric and freeform modeling.

Two years later, Autodesk discontinued Inventor Fusion when it released Autodesk Fusion 360, a full-featured 3D CAD/CAM/CAE tool for collaborative product development, combining organic modeling with precise solid modeling. Since then, the company has continued to improve Fusion 360 with frequent updates, to the point that it rivals and sometimes exceeds the capabilities of its own Inventor software.

The Fusion 360 user interface seems quite spartan compared to other products. Tabs across the top of the window let you select among open projects, whereas the Application bar provides tools for accessing design files. Most tools appear in the toolbar. To simplify things, the program’s capabilities are grouped into workspaces. When selecting a workspace from the toolbar drop-down, users will find tools and commands specific to that workspace. For example, the Model workspace provides tools for placing 3D solid primitives, and for sketching and converting sketches into features, like what is found in a traditional 3D CAD environment. Sculpt is a sub-environment of the Model workspace, with tools for pushing and pulling vertices and edges to achieve the desired shapes. The Patch workspace enables creation and editing of 2D or 3D surface geometry.

After selecting a tool within the current workspace, users work on the design within the canvas, left-clicking to select objects and right-clicking to access a marking menu that contains frequently used commands. A ViewCube in the upper-right corner of the canvas enables orbiting of the design or the ability to view it from standard positions. 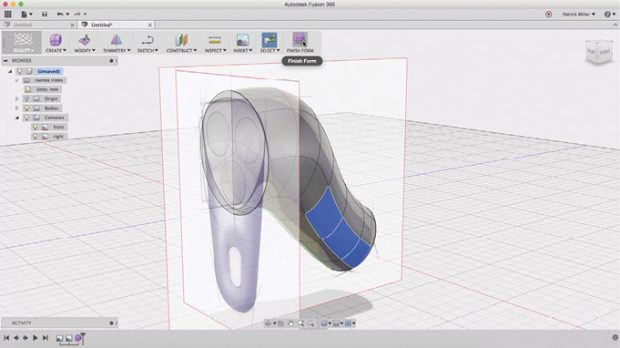 Start designing in a blank canvas or use an industrial design workflow to start sketching over imported images.

A floatable Browser palette lists objects in the design and enables control of their visibility. A navigation bar near the bottom of the canvas contains commands used to zoom, pan and orbit as well as provides display settings that control the appearance of the interface and how designs are displayed in the canvas. Users can also navigate the view with mouse gestures.

A timeline across the bottom of the window lists the operations performed on the design. Right-click operations in the timeline to make changes and drag operations to change the order in which they are calculated. 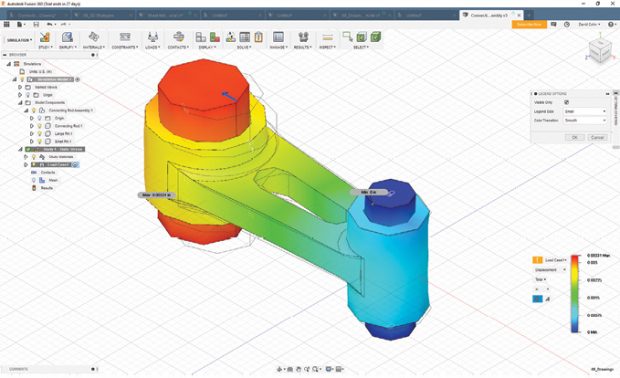 There is also a Render workspace for generating realistic pictures of your designs, an Animation workspace with tools for creating videos, a Simulation workspace that allows use of finite element analysis (FEA) to simulate how the design performs under various loads and conditions, and a CAM workstation with tools for producing toolpaths for fabricating designs using computer numeric control (CNC) machines.

Run Locally, Save to the Cloud

Users can start designing in a blank canvas (like a traditional 3D CAD program) or use an industrial design workflow to start sketching over imported images. Fusion 360 enables switching between direct modeling and history modeling, or even simultaneously using both. If the history timeline is turned off, the Sculpt and Mesh environments become their own workspaces, accessible through the workspace drop-down menu. 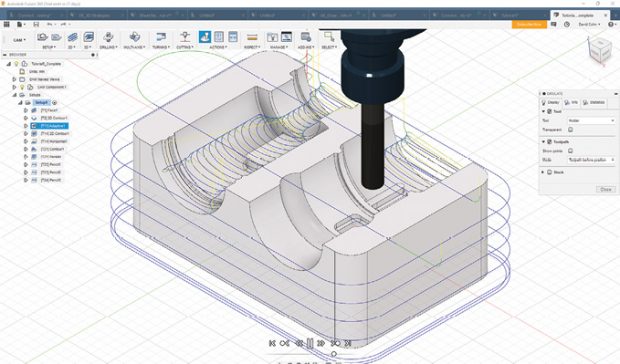 After generating a toolpath, inspect the results by using the Simulate function to see the actual cutting motion.

Although the software runs locally, all designs are saved to the cloud in A360, and a new version is created every time changes are saved. A360 also lets users share designs with others. Projects are the control mechanism for access to specific sets of information.

Open a Data Panel on the left side of the application window to access your designs and manage projects. If there’s no access to the internet or the connection is lost, it’s possible to still use Fusion 360 in Offline mode, although some file operations cannot be performed. Documents changed and saved in offline mode are automatically updated and uploaded to the Data panel. Work offline for up to two weeks. After this, Fusion 360 will need to sync back online to stay on the latest version. When the connection is restored, only the most recently saved version will be synced to the cloud. 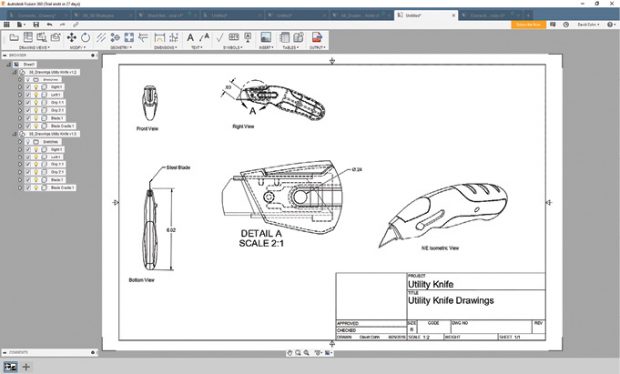 Fusion 360 provides tools for documenting parts and assemblies. Drawings remain associative to models so that they can update when changes are made to the model.

Fusion 360 is also interoperable with files from other programs, including Alias, AutoCAD, CATIA, NX, Pro/ENGINEER and Creo, Rhino and SOLIDWORKS. Once the model is complete, document designs are created with individual or multi-sheet drawings of parts and assemblies. Those drawings are separate files, but remain linked to the model from which they were created, and can be easily updated to reflect changes made to the model.

Last year, Autodesk added a Sheet Metal workspace to its growing arsenal of tools in Fusion 360. Those tools continue to improve. Create sheet metal parts by first sketching a profile to create a base flange. Then add additional flanges as well as extruded cuts, holes and threads.

There are also tools for creating patterns and mirroring, and users can easily change sheet metal rules and apply them on the fly. Fusion 360 provides two methods for flattening sheet metal parts. Unfold Part lets users unfold selected bends to create features across flanges, while Create Flat Pattern flattens the part, saving the flat pattern within the Browser. Then users can easily switch between the folded and flat view and create a drawing view using the flat pattern.

Fusion 360 also includes a CAM workspace. Because the CAD data exists in the same environment as the CAM data, if the design changes, the CAM data can be easily updated. And, since all data is stored in the cloud, users can access designs as well as tool libraries and post processes from any computer.

Once a part is ready to machine, users can create a setup to define the orientation and location of the datum used for the NC code. Users can then select the part to be machined, define the stock (the workpiece that will be machined) and create operations, such as drilling, pockets, slots and so on. Lastly, users can simulate the toolpaths to visually verify part conformance and generate the NC code.

The Simulation workspace includes tools for using FEA to investigate performance. Users can analyze how a model responds to structural loads and constraints, identify the natural free-vibration characteristics of a part or assembly, determine the critical buckling multiplier for a structure subject to compressive loads and study nonlinear static stress. Event simulation tools for velocity and damping as well as mass and acceleration, steady-state temperature distribution and heat flow are also available.

Furthermore, users can simulate temperature-induced stresses and use shape optimization to determine where they can remove material from a design while still achieving allowable stress and displacement objectives.

After opening the model to study, enter the Simulation workspace, create a new study, select the type of study to perform and assign materials. Depending on the type of study, then define settings. Then solve the analysis, performing the computations locally or in the cloud. The time required to solve locally depends on the capabilities of the computer. Solving in the cloud may be faster, but consumes cloud credits. Some studies, such as Shape Optimization, can only be solved in the cloud.

Because Fusion 360 updates automatically, users always have the newest technology. The latest release features an updated user interface. When hovering the cursor over a command in the toolbar panel drop-down menu, users will see a “more options” icon that gives the option of pinning the tool to the toolbar or shortcuts.

The Hole command now remembers the last used values for things like countersink diameter, counterbore depth and diameter, thread offset values and so on. The Smart Dimension tool now lets users pick a point on a drawing and dimension from it to an edge. Plus, the Centermark Pattern command is now smart enough to see patterns and apply a centermark to all of them automatically.

The CAM tools include additional post processors. Drill Patterns using “order by tool” now allows the pattern to reverse at each tool change so that the machine doesn’t have to reposition.

Fusion 360 is available in Standard and Ultimate editions. Both include the full suite of tools for design, documentation, data management, collaboration, simulation and manufacturing. With the tools, users can test models for static stress, modal frequencies and thermal stress and manufacture parts using 2.5- and three-axis manufacturing.

Like most Autodesk products, users can download a free trial of Fusion 360 that gives unlimited access to its full suite of tools for 30 days. After that trial period, however, students, hobbyists and startups making less than $100K per year can continue to use Fusion 360 Ultimate for free, while others must pay a monthly or annual subscription fee.

The program costs $40 per month for the Standard version and $190 per month for the Ultimate edition, if purchased on a month-to-month basis, but users can save $170 or $745 per year on Standard and Ultimate, respectively, by committing to a one-year subscription. The free trial comes with 25 cloud credits. Monthly subscribers get 100 cloud credits every month the subscription renews and unused credits roll over for up to a year. Annual subscribers get 1,000 credits when they purchase or renew their subscription. Additional cloud credits are $1 each. Autodesk also provides some excellent free tutorials, complete with sample files, to help users get up to speed using all aspects of Fusion 360.

Autodesk Fusion 360 may not be as mature a product as Inventor or SOLIDWORKS, but it has come a long way since its introduction just a few years ago and continues to improve with each update. As an integrated environment, it provides a full suite of tools in a package that runs on both Macs and PCs, and is affordable and flexible enough to make those tools available to everyone on an extended design team.

Autodesk Fusion 360 is only available by subscription. Students, startups and hobbyists (making less than $100K per year) receive the functionality available in the Ultimate tier for free.