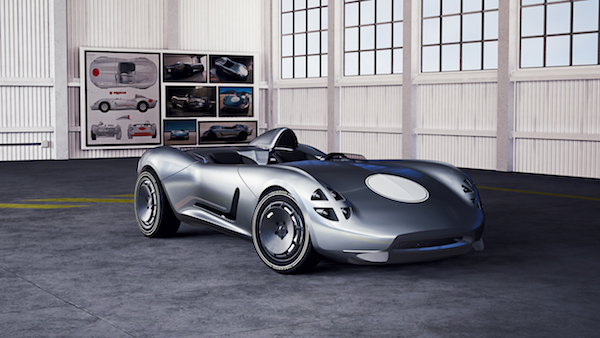 Call it luck or serendipity, but when custom car company Hackrod went looking for a platform to help with rapidly visualizing its CAD designs to enable online design review and collaboration, they called up UK-based LightWork Design at exactly the right time.

Hackrod had already been using Siemens PLM Software’s tools to design its proof-of-concept vehicle, the La Bandita. What the company needed was a way to rapidly convert CAD data into virtual reality (VR) so that designers could more quickly view and review the designs.

So when Hackrod co-founders Mouse McCoy and Felix Holst reached out to LightWork about using their SLIPSTREAM solution, they were pleasantly surprised when the LightWork team quickly responded that they had just been acquired—by Siemens.

“It was kind of amusing,” Holt says. “We were researching a way to move CAD data into an environment that would make it easy to review and manipulate, and Mouse had come across LightWork. We reached out to them, because SLIPSTREAM seemed to be the solution we were looking for. I sent them an e-mail saying we’d love to talk to them about it, and their reply was ‘Oh it’s good you’re working with Siemens, because we’ve just been acquired.' I sent my email the day it had all gone through.”

Now, Hackrod is using the SLIPSTREAM product to help bring its vision of the “gamification” of engineering to life. In the future, Hackrod believes that consumers should be able to use a combination of VR, artificial intelligence and 3D printing to design ready-to-order, custom vehicles that can be quickly manufactured via additive manufacturing.

“Traditional CAD data is incredibly heavy in terms of file size and being able to manipulate it within an application,” says Ben Widdowson, sales and marketing director at LightWork Design. “Most end users do not have the skill to open up a package like Siemens NX, so what Hackrod is looking to do is lightweight that data and present it in a more usable way.”

For Hackrod, however, Widdowson says that the workflow is a bit different. “With Hackrod, they have this grander vison to use a game engine to make customers collaborate,” Widdowson says. “They can put on a VR headset, see the car, make design changes to the product, and then push those back to the traditional CAD/PLM world. It kind of puts the process we normally follow on its head.”

Hackrod co-founder McCoy is a well-known motorcycle racer who has since established a career as a stuntman, actor, and director and heads up media company Bandito Brothers. His Hackrod partner Holst previously worked as a designer for Mattel’s Hot Wheels division.

When Holst and McCoy began collaborating several years ago, they started by turning every kids’ Hot Wheels playsets into reality—building a life-size Hot Wheels track at the 2012 X Games, for example.

Four years ago, McCoy and Holst began working on an Industry 4.0-related idea to enable drivers to build their own fantasy cars online and then actually have them produced via 3D printing. “We saw technologies coming together that make design and manufacturing as easy as playing a video game,” Holst says. “Mouse had witnessed the pancaking of the film industry with digital photography and editing. I was in music before Hot Wheels, and I saw the same effect in music and where GarageBand and iTunes transformed this elite industry into something people could do in their bedrooms.”

Hackrod partnered with Siemens PLM Software, in part because of the company’s investment in 3D printing integration. Hackrod uses NX as its foundation, and is also using Siemens’ simulation tools and multiphysics generative engineering technology, along with CAM software and MindSphere on the IoT side.

“We will be designing in full-scale in a VR game engine, and doing design review there using generative design and engineering. Then we can print the full-scale chassis in aluminum.”

According to McCoy, the use of industrial-scale 3D printing will be imperative for this type of new manufacturing concept. “We felt that there was really a last-mile problem when it came to Industry 4.0,” McCoy says. “We need a large-scale, validated additive manufacturing solution that can replace industrial tooling. You need to be able to print in full-scale in aluminum and carbon composite. If that isn’t solved, the rest of the vision can’t really be unpacked.”

The Siemens acquisition of LightWork became official in December, and right now the companies are working together to take the knowledge they’ve gained through working with Hackrod to expand the idea into an actual product available through Siemens.

“Now that we’re part of Siemens, we can explore more use cases across businesses and deliver them to more people more quickly,” Widdowson says. “We can enable companies that have a huge amount of heavyweight CAD data in Teamcenter to optimize that through SLIPSTREAM and then use it in various applications—to review vehicles, or in customer sales configurators, or doing reviews of product data ordered by a customer on a production line to reduce errors. We’re just staring to explore that now.”

Hackrod is still exploring the potential of doing design review in VR, and eventually hopes to enable multi-site, multi-person design reviews in SLIPSTREAM. They are also developing 3D print technologies to build the vehicle.

“We will be designing in full-scale in a VR game engine, and doing design review there using generative design and engineering,” McCoy says. “Then we can print the full-scale chassis in aluminum.”

Hackrod has a 5-axis machine (designed by Hackrod’s CTO Slade Gardner, a Lockheed Martin veteran) that will print the chassis using aluminum deposition wire feed combined with CNC machining. A number of 3D printing partners will handle production of the sub components.

From there, Hackrod hopes to open up the platform more widely. “La Bandita is a proof of concept for an entirely new way of manufacturing,” Holt says. “We’re pioneering a platform that will allow many vehicles from many other designers to follow through.”