Conquer the 3 Cs to Democratize Simulation

Overcome the complexity, compute challenges and cost that limit the use of simulation software in product design and development.

Simulation software promises to allow designers and engineers to understand how a part (or a system of parts) work before they physically exist. Or, to look at it from a bit more pessimistic perspective, simulation helps you understand why a product doesn’t work before creating expensive prototypes to test.

The concept is simple enough, but as products became more complex systems of systems that incorporate mechanical, electrical and software engineering, the software to simulate those products also became more complex. That complexity not only drove up software licensing costs and the amount of compute power needed to efficiently solve those higher-fidelity simulations, it also made simulation the purview of expert analysts, who are few and far between. As a result, a large pool of design engineers queue up for attention from a small pool of analysts, who in turn may be waiting for hours or days as outdated hardware churns away at a large simulation run.

To avoid those bottlenecks, vendors are working to make software easier to use for non-experts, taking advantage of hardware improvements and providing more flexible licensing models.

Cutting Down on Complexity

To decrease the learning curve and improve workflow efficiencies, in-CAD simulation add-ins are available for many design programs. These vary from simple motion studies to full-fledged FEA and CFD software nested inside the CAD software. The familiar user interface (UI) can help ease CAD users — who may be new to simulation — into the software.

For example, when the Simulation add-in is invoked in SOLIDWORKS Simulation, two new tabs appear in the CommandManager area: the Simulation tab and the Analysis Preparation tab. 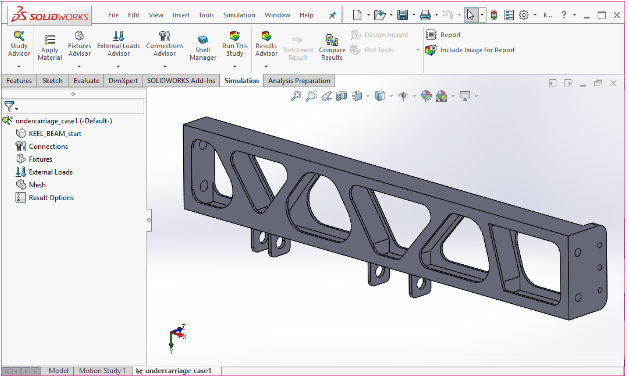 The SOLIDWORKS Simulation tools are shown in. The Study Advisor icon is selected, and a new Simulation Study is set up. This is a static analysis study: undercarriage_case1. Image courtesy of Tony Abbey.

The UI helps newcomers navigate the simulation software and makes it easy to swap between design and simulation, it’s not a replacement for the knowledge of an analyst. Choosing mesh methods, understanding loads and boundary conditions, or determining solver options is best left to the experts. But what if those experts could pre-determine the simulation parameters for specific products so that design engineers and others not well-versed in simulation could use simulation to tweak the design?

That’s the question that simulation apps were created to answer. Apps are templated approaches to simulation. The templates are built by experts so that non-experts can use them, thus freeing up the experts’ time in the long run. Many apps can be deployed via the web and used inside a browser. COMSOL, one of the first simulation software vendors to embrace “app-ificiation,” offers Application Builder, a tool that lets the software user create and deliver simulation apps, as well as COMSOL Server, which can function as the backend platform for hosting and deploying simulation apps.

“[Templates and apps] give the amateur or introductory level user the ability to be productive without learning the simulation software,” Autodesk’s Derrek Cooper, told DE. “But to build a template, you still need an expert who knows the software inside-out—something not every business possesses. Currently, some consultants and freelancers fill that void for companies without in-house talent.”

Design engineers don’t always need the fine levels of accuracy that can be offered by experts using simulation apps and templates. In the early stages of product development, quick answers to “what-if” design changes can help move iterations forward. That’s the idea behind ANSYS Discovery Live (ADL), which the company calls “an interactive experience in which you can manipulate geometry, material types or physics inputs, then instantaneously see changes in performance.” 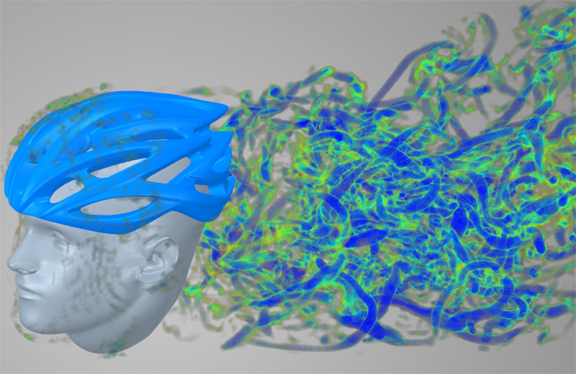 In ANSYS Discovery Live, fluid results like velocity are instant, and provide insight on recirculation zones as well as velocity. Image courtesy of ANSYS.

“There’s no preprocessing, no post-processing. Results are real time,” says Mark Hindsbo, VP and GM of ANSYS. “You can change direction or the size of your forces, edit your geometry or change materials, and interactively get updated results.”

The interactivity is due to ADL’s use of graphics processing unit (GPU) acceleration. ANSYS created ADL with the CUDA programming language to take advantage of NVIDIA GPUs’ massively parallel processing power to speed up computation.

A mobile or desktop workstation with a dedicated NVIDIA GPU with at least 4GB of memory and the latest graphics driver in needed to use ADL. In a blog post, NVIDIA recommends “a Quadro P5000, P6000 or GP100 to get the best visualization performance. ANSYS Discovery Live automatically boosts simulation fidelity based on the available GPU memory. So the more powerful the GPU, the better.” 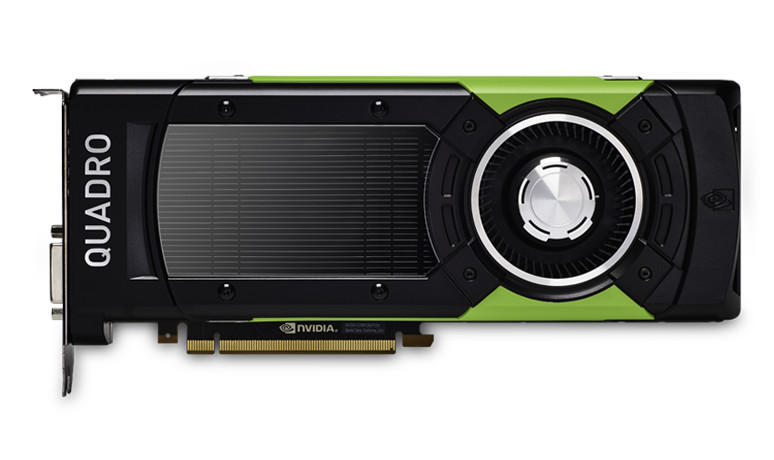 Based on ANSYS research, one out of every 22 engineers tapped simulation software during design workflows in 2005; today that ratio is one out of six engineers, and with ADL, ANSYS is aiming to make the practice accessible to every engineer by 2020, according to Hindsbo.

ADL was designed for rapid concept exploration, so complex physics decisions and mesh settings do not appear in the software UI. They are decided by the software. Users simply open a CAD file, hit a button to select one of the physics solutions (fluids, structural, and thermal), and interactively define boundary conditions and the software instantly calculates and displays results without the need for complex meshing, Justin Hendrickson, ANSYS director product management, told DE.

Beyond the early concept stage, access to high-performance computing (HPC) has been another bottleneck to the democratization of simulation. While local workstations can handle many types of simulation runs — and are getting more powerful all the time — larger, more complex simulations may demand additional computing resources.

If you equate virtualization with poor performance, you may not realize how much has improved and continues to advance in the world of virtualization. Download “Making the Case for Virtual Workstations,” produced by the editors of DE, to learn how virtual workstations can meet and exceed the demands of a hardcore engineering environment, improve productivity for design engineering teams, and reduce complexity for IT departments. 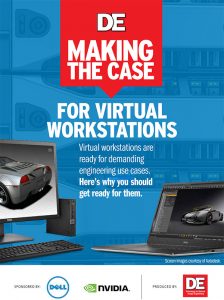 Virtualized solutions such as Dell POWEREDGE R740 with NVIDIA Quadro Virtual Data Center Workstation (Quadro vDWS) software, allow virtual workstation performance from the data center or cloud to be delivered to any device, anywhere. Unlike early virtualization environments that weren’t fully equipped to handle the robust graphics requirements of 3D design and engineering software, new technologies such as virtual GPUs and compression techniques now ensure that virtual workstations perform on par with their traditional, physical counterparts. In addition, leading independent software vendors, including Autodesk, Dassault Systèmes, Siemens and PTC, have taken steps to certify and optimize their software to run on virtual workstations. As a result, engineers will find it difficult to distinguish between a virtual and physical workstation environment, stamping out any lingering concerns about system degradation or a compromised user experience.

Other use models employ cloud computing to offer access to HPC hardware for simulation, as seen in offering by companies like Rescale, OnScale, UberCloud and others. Rescale offers simulation software users access to customizable, on-demand HPC resources. Onscale offers the solver as part of the on-demand package. The UberCloud solution includes software, hardware, and support. End-users, software providers, resource providers and computing experts collaborate in teams via UberCloud to jointly solve the end-user’s application in the cloud.

Because 80% of product costs are reportedly tied to the early design phase, Hindsbo contends introducing analysis-led digital exploration capabilities at that point in the workflow should greatly reduce mistakes and eliminate unnecessary expenditures. Avoiding one mistake could easily pay for the cost of top-of-the-line workstation equipped with a powerful NVIDIA GPU, such as the new Dell Precision 7730.

The return on investment for hardware expenditures are pretty easy to justify when you take into account the huge labor and time savings offered by simulation. That’s before you factor in potential innovations made possible by faster, high-fidelity simulation results. 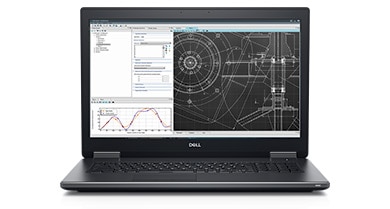 Billed as the world’s most powerful mobile workstation, the new 17-inch Dell Precision 7730 is is 15% smaller than the previous generation and has a 128GB memory capacity with up to 3200MHz SuperSpeed memory. Image courtesy of Dell.

On the simulation software side, the ROI story is much the same, but the sticker shock can be much greater. To ease the pain, many software vendors have turned to a subscription-based model. Subscriptions have become more mainstream in CAD since Autodesk made them mandatory in 2016. It has expanded to topology software and, in the case of ADL, simulation software. ADL comes in three different editions: Essential, Standard and Ultimate. Annual subscription prices are from $1,195 per year to $5,995 per year.

Looking beyond the concept development stage, many vendors of advanced CAE software have pool- or token-based licensing models that operate on a pay-per-uses basis. Altair’s HyperWorks Units, for example, meter usage of the entire HyperWorks suite of products, in addition to partners’ products. ANSYS introduced ANSYS Elastic Licensing in 2016, a pay-per-use licensing model that unlocks the company’s portfolio of engineering simulation software.

Cloud computing options have also opened up the software-as-a-service (SaaS) model for simulation. With the SaaS model, you can bypass the need to acquire and maintain on-premise HPC or powerful multi-core machines if you only have occasional uses for them. The monthly, pay-as-you-go fee structure works better for businesses with less-predictable or less-consistent workflows. For instance, if your project needs heavy use of simulation in the early phase, but light in later phases (or the other way around), SaaS allows you to adjust your seat count to match the workload.

Options are the key to democratizing simulation on the hardware, software and cost fronts. The trick is to introduce those options without adding additional complexity to the workloads of design engineering teams, and especially the already overworked analysts on those teams.