Tectonic Audio Labs created a state-of-the-art balanced mode radiator speaker using electromagnetics, mechanical, and acoustics simulation. The speaker was implemented into a virtual reality (VR) headset for Valve Corporation and is now regarded as the gold standard for VR audio. 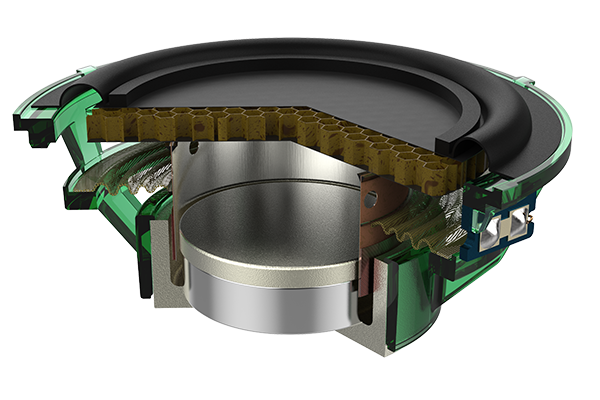 Cutaway view of the BMR speaker

Virtual reality is meant to immerse the user in the virtual world as much as possible by making it feel as real as can be. When virtual reality is done right, you could visit a historical site from your couch, experience a habitat from eons past at a museum, or explore Mars or the Moon from the comfort of your living room.

The gaming industry is making great strides in VR development, but one challenge that game developers have encountered is how to effectively obtain suspension of disbelief in the virtual world.

Whether you're using VR to study an asteroid approaching Earth or playing a game where you have to fire missiles at it, the more immersive the experience, the better. Other entertainment fields, like literature and film, face the same challenge of suspension of disbelief, but there's something exclusive to VR: audio immersion.

Valve Corporation, a leading developer in the gaming industry, creates games, gaming platforms, and gaming hardware, sought to develop the Valve Index® VR headset that could provide suspension of disbelief. To do so, Valve engineer Emily Ridgway and her team had to figure out how to create an immersive audio experience.

While playing video games, people often wear stereo headphones to determine where the sound is coming from relative to their character in the game. If the source is to the left of the character, the player will hear the sound through the left headphone speaker, and vice versa. The Valve team decided against using traditional headphones, because headphones are designed to isolate sound, cancel noise, and exaggerate frequency responses — not to create audio immersion. Ridgway was concerned that the very physical design of headphones could counteract audio immersion. 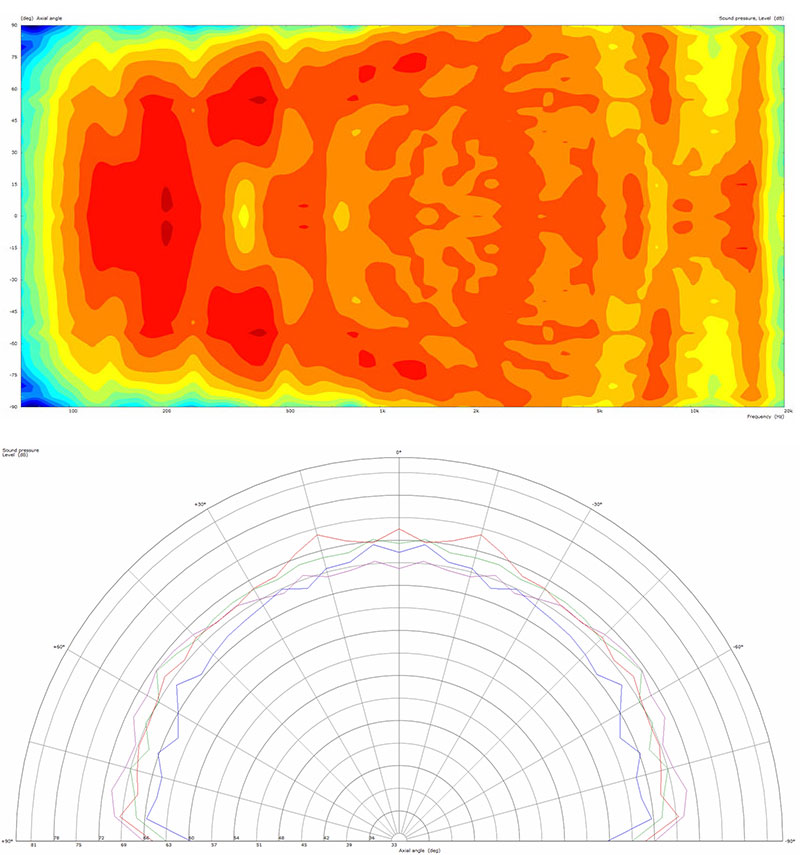 Directivity and polar plots for the BMR speaker analysis

For one, headphones put sound directly into the ear canal, so the sound can feel imagined (known as an internalized auditory source), coming from within the person's head, or otherwise “not real”. Also, headphones can be physically uncomfortable, and this discomfort can draw a user out of the gaming experience. Some people opt for loudspeakers instead of headphones. While loudspeakers mitigate some of these issues, they come with their own problems. The sound of a loudspeaker is affected by the geometry and acoustics of the real room. Another reason is that they have a “sweet spot” that the player would need to stay in for best sound quality, but when people experience VR, they tend to move around.

Ridgway and her team went through several types of audio speakers for the headset. None quite fit their goals; none, that is, until they found Tectonic Audio Lab's balanced mode radiator (BMR) speakers. Ridgway “immediately noticed several positive benefits,” she wrote in a blog post. “They reduced coloration due to speaker mispositioning, were almost within range of our weight target, had great frequency response in high-mid ranges (important for binaural simulations), and were much thinner than traditional speaker drivers.” Valve teamed up with Tectonic Audio Labs to harness these benefits and design custom speakers for their VR headset.

What Is BMR Speaker Technology?

In traditional speakers, audio is generated by a cone diaphragm moving pistonically. This movement transfers energy along the axis of movement and creates sound. BMR speakers are different, in that they are utilizing bending waves: waves that are moving perpendicular to the propagation direction. This means that they have more interaction with the surrounding air, so they are able to transfer more energy. Higher frequencies can be difficult for traditional speakers to handle, as they can cause the traditional diaphragm to ripple or bend, also known as cone breakup. The subsequent peaks and troughs decrease audio quality and increase placement sensitivity. While most speakers try to avoid bending waves, BMR embraces them.

“We embrace the bending modes and want them to occur. We can control where they occur, and it's those bending modes that preserve the off-axis output. We're using resonance breakup to our advantage. In many ways, BMR goes against the thinking of traditional acoustic engineering.”

BMR technology is able to exploit this high-frequency rippling through the optimization of several characteristics, such as material selection and mass loading. Through this exploitation of the bending modes, and the superposition of both the bending and piston modes, sound is evenly propagated in the BMR speaker.

The team at Tectonic Audio Labs got to work on the audio speakers for the Valve Index® VR headset. “For us, the starting point is to analyze the modal structure of the diaphragm,” Whitwell said. “What's really important for us with the BMR is to make sure that the modal behavior begins right when the pistonic behavior begins beaming.” Once beaming is about to begin, the bending modal behavior begins, which “fills in” the off-axis output that the beaming neglects.

In order to optimize this behavior, the Tectonic team first had to figure out where in the disc bending modal behavior occurs and how many bending modes occur across the bandwidth. They used the COMSOL Multiphysics® software to perform an eigenfrequency analysis of this behavior. From there, the team was able to control the bending modes through optimizing the thickness and material of the disc. By making sure this behavior occurs precisely where and when they want it to occur, Tectonic Audio is able to preserve the speaker's wide directivity output throughout the range.

Tectonic also analyzed the motor design, performing an electromagnetics analysis to optimize the voice coil. “You can add many turns to your voice coil wire to increase your conversion of electromagnetic to mechanical energy, but your weight goes up, and so you have competing constraints there,” Whitwell explained. “All of that optimization we do within COMSOL®.” The mechanical and electromagnetics models were processed and optimized separately.

Tectonic Audio Lab's next step was to bring the two together for a coupled analysis. Because nearly everything in the model is axisymmetric, they were able to model the coupling in a 2D axisymmetric space, saving computational resources. The diaphragm material is the exception.

“The diaphragm material itself is actually orthotropic; it has different stiffnesses in different directions. The Solid Mechanics interface in COMSOL Multiphysics® lets us model the orthotropic nature of the material within the 2D axisymmetric space, which is really fantastic.”

After the team developed the fully coupled model, they introduced other elements, like the spider suspension, which centers the coil and controls its movement. At the same time, they continued optimizing the fully coupled model to ensure that the diaphragm's behavior would be balanced — which is the key to the BMR technology, allowing it to work properly in the Valve Index® VR headset and provide a great experience for different users.

Once the speakers are fully dialed in, the suspension is the next focus, and its geometry is analyzed in a nonlinear study.

“We deform the suspension geometry up and down, to see how the stiffness of those components changes with displacement. And again, there's a lot of optimization required there.”

Whitwell emphasized that this optimization was particularly important in this project, “Any noise in the drive unit or distortions would be very, very obvious to the listener.” After the suspension is fully optimized, it goes back into the coupled model.

“We make sure that everything is still giving us the performance we desire,” Whitwell said, “And then we can go and build a prototype.”

The “King” of VR Headsets

After Tectonic Audio Lab's design optimization and prototyping were successful, Valve Corporation was able to bring their headset to market. Since then, it has earned many, many positive reviews.

One example is a beloved and popular YouTube channel called Linus Tech Tips, run by the titular Linus. Video topics range from explaining if more RAM makes your computer faster to reviewing recently released wireless keyboards, and even building a PC tower case out of cardboard. And, of course, they review different VR headsets.

In August 2019, Linus uploaded a video called “Maybe VR isn't dead after all…” in which he reviewed the Valve Index® Headset. He was initially ambivalent to the speakers, but after a day of using the headset, Linus was impressed.

“Credit to the speakers,” he said, somewhat incredulously. “They actually sound shockingly good!” Linus spends the rest of the video going over the headset's specifications. At the end of the video, Linus holds up the Valve Index® Headset and looks directly into the camera, saying “This is absolutely the king of VR gaming headsets.”

Valve Index is a registered trademark of Valve Corporation.