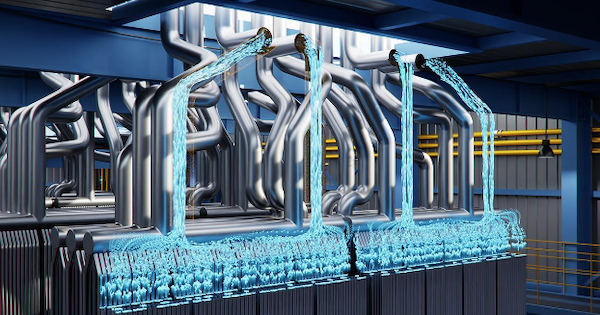 The list includes Amazon Robotics’ use of Omniverse to optimize warehouse design and train intelligent robot assistants, Ericsson’s use to optimize 5G signal propagation in cities, and BMW’s use to design, simulate, operate, and maintain automotive plants.

Siemens Energy, a spinoff of the former Gas and Power division of Siemens Group, is using Omniverse to predict corrosion progression in power plants. “Siemens Energy estimates that by predicting corrosion accurately, they can reduce inspection during regular maintenance and unplanned downtime by 70%. Reducing downtime across the industry by five to seven days can save nearly $2 billion a year,” said Huang.

The energy giant operates combined cycle power plants, running on large gas turbines and steam turbines. A crucial component of their operations are the heat recovery steam generators (HRSGs). The technology improves the power plant’s thermodynamic efficiency by more than 60%, according to Siemens Energy.

One of the causes of the corrosion is the steam and water mixture, which affects the lifespan of parts within each HRSG. The blend of different physics involved makes the simulation job complex and computationally-intensive. One method to speed up the simulation is to simplify the calculation, using what is known as reduced order modeling. But this approach has a penalty.

A video demonstration of this work explained that “reduced order models aren't extremely accurate, and full simulation takes expertise and time … With point cloud data to train a physics-based AI model, [Siemens Energy] can infer high-fidelity flow shown by the streamlines in seconds.”

In a blog post about the collaboration, Richard Kerris, VP, Omniverse Development Platform, NVIDIA, wrote, “Siemens Energy is enlisting NVIDIA technology to develop a new workflow to reduce the frequency of planned shutdowns while maintaining safety. Real-time data—water inlet temperature, pressure, pH, gas turbine power and temperature—is preprocessed to compute pressure, temperature and velocity of both water and steam. The pressure, temperature and velocity are fed into a physics-ML model created with the NVIDIA Modulus framework to simulate precisely how steam and water flow through the pipes in real time.”

Recreating the operations of the HRSG as a physically accurate, dynamic 3D model amounts to building a digital twin of the system with all its assets and operations. The hardware powering the digital twins is a cluster of NVIDIA A100 Tensor Core GPUs. The digital twin lets Siemens Energy simulate the corrosive effects of heat, water, gas, and other elements on metal over time, then develop an effective maintenance schedule to intervene before corrosions occur.

“The scaled Modulus PINN model was run on AWS Elastic Kubernetes Service (EKS) backed by P4d EC2 instances with A100 GPUs,” wrote Kerris. “Building computational fluid dynamics (CFD) models for each HRSG, takes as long as eight weeks each to estimate corrosion within pipes at HRSGs plants. This process is required for a portfolio of more than 600 units. Faster workflow using NVIDIA technologies can enable Siemens Energy to accelerate corrosion estimation from weeks to hours.”

From Prediction to Self-Correction

According to Stefan Lichtenberger, Technical Portfolio Manager, Siemens Energy, the rationale behind the HRSG digital twin is an increased renewables focus leading power plants to adapt their operations. This sudden shift has resulted in unexpected failures. He states that there is also a workforce shortage of trained professionals to properly maintain HRSGs.

During his session at NVIDIA GTC, Stefan stated that “scalable digital twins are required to grow the business, monitor assets through unsupervised learning, and identify integrity risks from corrosion and damage.” He detailed a new approach to accelerate corrosion detection that uses a deep knowledge of physics through 3D topology and CFD models combined with ML—two areas suited for NVIDIA’s platform for industrial digital twins.

Enterprises can start learning how to build digital twins by joining GTC sessions on aggregating 3D datasets to simulate an industrial environment and deploying virtual autonomous mobile robots (AMRs) that use synthetic data to train the perception models of the real-world robot. These organizations can also join a session exploring a partnership with Siemens and NVIDIA to make production more sustainable in the industrial metaverse led by Cedrik Neike, Member of the Managing Board and CEO Digital Industries, Siemens AG.

Dell Technologies and NVIDIA are committed to offering innovative solutions to help customers manage their collaborative and performance-intensive workflows by combining the power of Dell Precision workstations and NVIDIA Ampere RTXTM GPUs with NVIDIA Omniverse™ Enterprise to create complete solutions for any sized organization.

Download this brochure to learn more about how your organization can leverage the power of NVIDIA Omniverse on Dell Precision workstations.

Omniverse Enterprise is available for immediate, short-term access on NVIDIA LaunchPad and offered as a subscription through NVIDIA partners such as Dell, with the option to deploy it on Dell Precision workstations, Dell EMC VxRail, or Dell EMC PowerEdge servers.

To get started with digital twins, visit the dedicated product page for Omniverse Enterprise.