Additive manufacturing transitions from prototyping to a means of mass production, raising the stakes for sustainability.

Additive manufacturing transitions from prototyping to a means of mass production, raising the stakes for sustainability.

When the early crops of commercial 3D printers appeared, they were positioned mainly as prototyping hardware, for creating small numbers of physical mockups and one-of-a-kind models. As such, their output was limited by design, and their environmental impact was negligible.

But over time, the technology evolved and improved in speed and quality. Today, leading automotive, aerospace and consumer goods makers are looking at 3D printing not as a prototyping method but as a means for mass production, in some cases to replace traditional metal-based machining operations. In fact, the term additive manufacturing (AM) has now become just as widely accepted as 3D printing, reflecting the shift in application.

In “Charting the Environmental Dimensions of Additive Manufacturing and 3D Printing,” published in the Journal of Industrial Ecology, Yale School of Forestry and Environmental Studies, in September 2017, the authors pointed out: “The transition from an industrial prototyping process to a broad range of manufacturing applications creates an urgent need to better understand the environmental effects and impacts of the technology, including those arising from raw materials and energy consumption, distribution, wastes, and health and safety considerations.”

Can 3D-Printed Parts be Recycled?

The argument in favor of 3D-printed parts over traditional metal-based parts often goes like this: With 3D printing, you can create parts with complex geometry, porous interiors, lattice structures and membrane structures; therefore, you can create lighter parts with less material, resulting in waste reduction.

In 2014, a Department of Energy Solar Decathlon competition at the University of California, Irvine (UCI), focused on the design and construction of a solar-powered house. Undergraduates Will Amos and Aldrin Lupisan, UCI environmental engineering students, had been put in charge of the project’s “Tool Room of the Future,” which featured a 3D printer. “We postulated that each family would be able to recycle their plastic waste into filament for 3D printing so they wouldn’t have to buy virgin materials,” Amos explains. 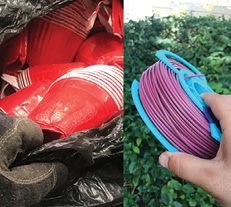 Sourcing the printer’s materials led to an aha moment: What about taking post-consumer plastic waste and turning it into high-quality, engineering-grade materials for 3D printing and other advanced manufacturing processes?

Two years later, the two students and their team continued work turning recycled plastic into 3D printing filament as a senior capstone research project. Now graduated, the pair—along with Sharon To and Jesse Jackson—founded Closed Loop Plastics (CLP; closedloopplastics.com) with the mission, “to advocate benevolent stewardship for the environment, foster environmentally conscious minds, and lower the barrier to entry to sustainable living and design.”

CLP currently operates a Prusa i3 MK3, Ultimaker 2+, Ultimaker 3, Rostock Max v3 and Lulzbot TAZ to help it evaluate different plastic blends, printing parameters and final properties. An improved industrial granulator system lets the team input scrap material in almost any form. They are in search of funding to increase their production capacity from kilograms per month to tons per month and have been expanding the business through projects with end user partners such as Sustainable Surf (sustainablesurf.org).

Several months ago, CLP put out a call on social media for individuals to test its PS filament (now verified as true high-impact polystyrene [HIPS]), offering a free 0.25 kg spool in return for survey feedback. DE informally put Party Pink to the test.

But this is a simplistic view that overlooks how materials for 3D printing are obtained and what their long-term effects will be when they become part of hundreds of thousands of everyday items, from electronics, wearables, home decor and furniture to automotive and aerospace parts.

With the two common 3D printing methods—fused filament modeling (FFM) and selective laser sintering (SLS)—nylon, acrylonitrile butadiene styrene (ABS), thermoplastic polyurethane and other thermoplastics serve as the basis for parts. Technically, parts created with such materials can be melted for recycle and reuse.

“Only a handful of plastics are recycled via traditional municipal waste streams, so even if a part is recyclable, it does not guarantee that it will be recycled. Consideration needs to be given to the entire workflow of recycling, including collection, sorting and processing,” says Jason Rolland, vice president of Materials at Carbon.

Another 3D printing method, known as UV curing (bonding materials by exposing them to ultraviolet lights) uses thermosetting photopolymers. According to the article “Reprocessable thermosets for sustainable three-dimensional printing,” published in Nature Communications, in May 2018, UV-cured parts are popular due to “their superior mechanical stability at high temperatures, excellent chemical resistance as well as good compatibility with high-resolution 3D printing technologies. However, once these thermosetting photopolymers form 3D parts ... [they] cannot be reprocessed, i.e., reshaped, repaired or recycled.”

With the introduction of its own 3D printing hardware line, dubbed Multi Jet Fusion (MJF), HP is expected to become a major player in the AM ecosystem as well.

“3D printing will allow us to create items internally rather than outsourcing production.”

“Our Multi Jet Fusion printers were created to be circular and sustainable right from the start,” says Nate Hurst, HP’s chief sustainability and social impact officer. “For example, both of the plastics that are used—PA12 and PA11—can also be recycled, both as a powder and as a printed part. HP’s 3D High Reusability PA12, which is developed to allow reuse of surplus powder batch after batch, delivers consistent performance while achieving 80% surplus powder reusability. In addition, we recently released a PA11 material that is a 100% bio-based content polymer derived from the oil of the castor bean. Castor beans are non-GMO, require little irrigation and are naturally pest- and drought-resistant.”

“In some cases, we’ve been able to replace metals or other plastic alloys, with a single material that will be fully recyclable and overall less mass,” Hurst says. “Using 3D printing to make parts for our own HP Latex printers, we have replaced an aluminum part with a 3D-manufactured nylon part, resulting in a 93% decrease in weight, a 95% reduction in GHG [greenhouse gas] emissions and a cost reduction of 50%.”

HP isn’t the only company to focus on removing mass from products. “The auto industry has proven over the past several decades that metal parts can be replaced with lightweight, durable and cost-effective polymeric parts,” Rolland points out.

“In the case of Carbon’s resins, our materials are already used in hundreds of production applications where they are either replacing a traditional injection-molded material, or they are enabling new parts not possible through traditional manufacturing (often via dematerialization). As we advance our materials, we see a great complement between performance and sustainability. For example, materials that can be melt-processed after use will have properties similar to tough, ductile thermoplastics rather than brittle thermosets,” explains Rolland.

“It will be aggressively adopted in all design engineering. The material development to make additive manufacturing a common design element is key.”

The footwear maker Adidas is now collaborating with Parley for the Oceans, a coalition of artists, activists and researchers working to protect the ocean’s fragile ecosystem. The first outcome was a line of Parley shoes, made from recycled marine plastic waste. Was the footwear merchant motivated by a genuine desire to contribute to the growing sustainable movement? Was the plan to generate goodwill for the brand for economic gains? Most likely a mixture of both, but such movements shape the strategies of technology suppliers. One of Adidas’ 3D printing suppliers happens to be Carbon.

“Carbon has major sustainability efforts underway in several of our highest volume programs, including footwear and dental. In both of these areas, customer demand for sustainability has helped shape our approach to innovation,” says Rolland. “Because we are still very early in the digital manufacturing revolution, we have the opportunity to build in sustainability from the ground up using new approaches in chemistry, hardware, software and post-processing.”

“Looking at the industry today, most of the technologically advanced companies who are often the quickest to adopt 3D printing are also the most outspoken in terms of preserving the environment,” Hurst says.

“We have been using 3D printed parts in our products since 2011. It has saved us a lot of time and money.”

In April 2017, HP announced its Open Materials platform initiative to attract third-party vendors to develop materials for HP printers. It comes in the form of a 3D printing material development kit, to simplify testing and certification.

“Since its inception, HP’s Open Materials program has not only been focused on accelerating materials innovation, but on collaborating to develop breakthrough new materials that are bio-based, reusable and recyclable,” says Hurst. “This is all a part of our commitment to transform our entire business, and those of our customers and partners, to drive a more efficient, circular and low-carbon economy.” 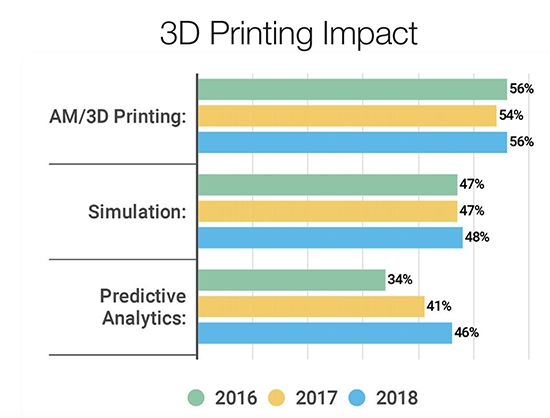 When asked which technologies will have the biggest impact on product design and development over the next five years, 3D printing beat out other technologies three years running. Source: DE’s Technology Outlook survey.

As promising as the current initiatives are, more advocacy and coordinated education by industry leaders may be necessary, as businesses’ immediate economic concerns may trump long-term sustainable needs.

“Recycling and reuse in the AM industry is certainly of interest among some, but it is largely ignored by most, unfortunately. I suppose companies feel they have bigger fish to fry,” remarks Terry Wohlers, president and principal consultant at Wohlers Associates.