Agricultural machines plow into autonomy. Like autonomous vehicles, autonomous farm equipment needs training, with the bulk of it happening in the virtual world.

Agricultural machines plow into autonomy. Like autonomous vehicles, autonomous farm equipment needs training, with the bulk of it happening in the virtual world. 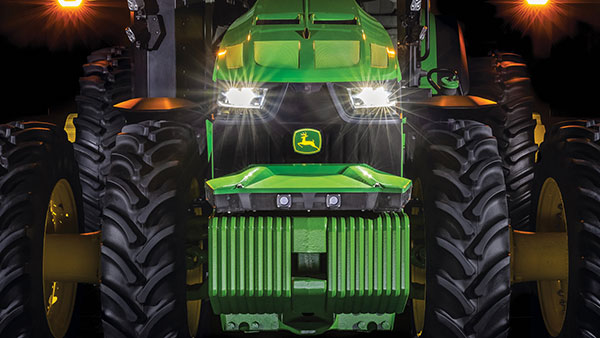 John Deere introduced a fully autonomous tractor at CES 2022. The vehicle is controlled by a mobile app. Images courtesy of John Deere.

The global market for agricultural robotics is on track to reach $7.88 billion by 2032, according to the IDTechEx’s report “Agricultural Robots and Drones 2022-2032: Technologies, Markets & Players.”

“As agricultural labor becomes increasingly costly and scarce, something exacerbated by the COVID-19 crisis, attention is increasingly turning towards robotics as a key component of agricultural production,” the report’s authors noted. 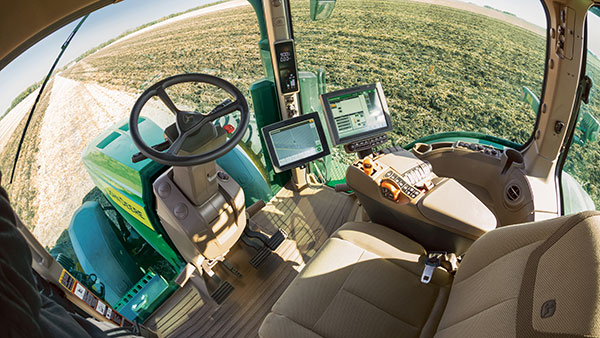 “The first part is to autonomously transport materials or passengers, to go from point A to B,” Bouzard says. “That part is nearly the same as the autonomous vehicles. The second part is the autonomous operation, to grab the fruits or cut the crops, for example. Here, contact between the environment and the machine is mandatory.”

The second part, he points out, is the opposite of an autonomous car’s objective: To avoid contact with the environment at all costs. The fusion of these two seemingly incompatible operations into a single machine is the ultimate challenge of advanced agricultural robots.

Because of the machine’s need to interact with the environment, in digital twin-based simulations, another need arises. “You need a dynamic environment for that,” says Bouzard. “The tractor needs to go into the field, then cut the crops. To model the terrain and the interaction between it and the machine, you need other types of physics.” 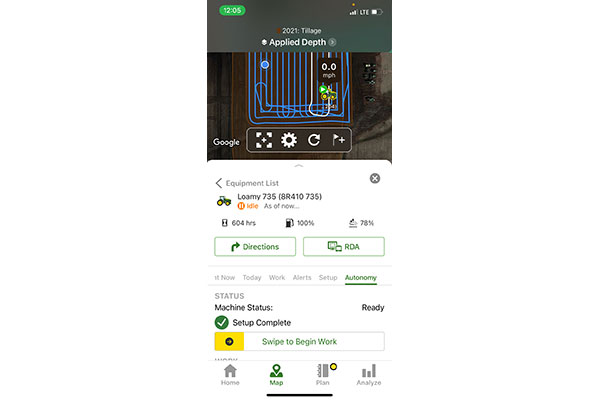 Because of the need to perform a designated task, the autonomous agricultural and construction robots need greater self-awareness—in a manner of speaking—than their automotive cousins.

“Take a construction truck, as an example. The truck needs to understand its own structural integrity, the load it bears because of the excavator,” Bouzard explains.

For such a machine, the path choices are more complex, Bouzard says. Though one path might be the shortest route to its destination, if the holes and rocks along the way pose a threat to the vehicle’s stability and durability, it must choose an alternate path, even if it means traveling longer and consuming more fuel.

Because of the outdoor work and the additional exposure to harsh weather, sensors in the agricultural machine must be more robust than those on a typical passenger car, Bouzard observes. “On the other hand, because it operates in a closed field, navigation is much easier,” he adds.

Since autonomy takes on a different meaning in farming and construction equipment, the widely used five-tier system to grade autonomous vehicles (Level 1, with driver assistance, to Level 5, fully autonomous) may not be appropriate, but, Bouzard says, “We’ve seen fully autonomous machines deployed in the field.”

Like autonomous vehicles, autonomous farm equipment needs training, with the bulk of it happening in the virtual world.

A virtual framework is needed to conduct deep learning, to test and validate the machine and control performance across different scenarios, according to Bouzard. For motion training, he says Simcenter simulation software has direct application. 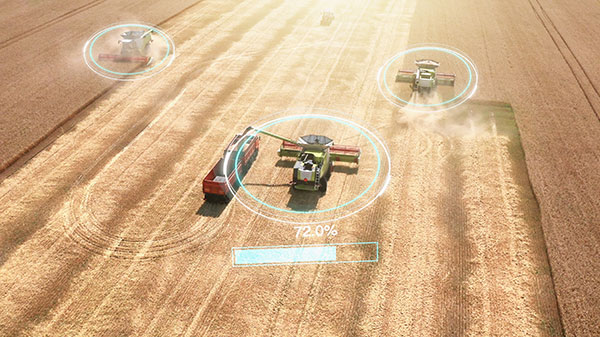 “Usually, you need multiphysics capability because of the operations of the machines,” Bouzard adds. “You’d also need the ability to import and edit your environment, with fields, crops and different soils, and to place obstacles on its path. You may also need to model the sensors accurately. For that, Siemens has [original equipment manufacturer] partners’ products.”

According to the company announcement, the tractor has six pairs of stereo cameras that enable 360-degree obstacle detection and distance calculation.

Furthermore, “images captured by the cameras are passed through a deep neural network that classifies each pixel in approximately 100 milliseconds and determines if the machine continues to move or stops, depending on if an obstacle is detected. The autonomous tractor is also continuously checking its position relative to a geofence, ensuring it is operating where it is supposed to, and is accurate to within less than 1 inch.”

The owner runs the tractor from John Deere’s Operation Center Mobile app, an online farm management system. Once the autonomous job is initiated, the owner can step away, periodically checking via a mobile app to ensure the machine is following the guided paths. The tractor may also send out alerts to the owner when it encounters obstacles in the field. The manufacturer didn’t disclose the tractor’s price. However, Modern Farmer noted similar tractors from John Deere tend to cost between $300,000 and $500,000.

“Usually, you need some type of technological infrastructure to make sure you can deploy such a machine,” says Bouzard. The price range suggests such machines are out of reach for ordinary family-run farms, and perhaps more suitable for large-scale industrial farms.

Though shiny new autonomous machines might sound attractive, Bernardo de Castro, president of Hexagon’s agriculture division, thinks there may be an opportunity the industry is overlooking— “to equip and adapt existing equipment so that they become semi or fully autonomous” (“Autonomous Machines: advances and challenges on the way to the farm of the future,” December 2021).

“Solutions such as these are, in reality, the first steps towards the autonomy of vehicles in the field. We have already worked on evolutions of these products, which promote the gain of efficiency of the machines through the automatic regulation of operating parameters,” he notes.

Even with the incremental approach, he anticipates the path to autonomy will not be smooth.

“In agricultural areas in general, we know that connectivity is a major bottleneck. The adoption of autonomous vehicles will also undergo necessary restrictions of legislation, in addition to all technologies to ensure absolutely reliable levels of safety,” he says.