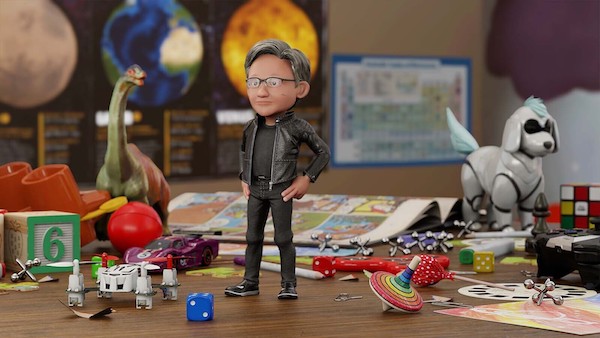 This month, NVIDIA kicked off GTC21, a follow-up virtual event to the GTC Spring event held in April. Many of the early peeks and previews from the past returned as concrete product news, including the launch of Omniverse Enterprise.

In his keynote at GTC 2019, NVIDIA CEO Jensen Huang painted Omniverse in broad brushstrokes, describing it as “an open collaboration tool …[that] works with all major 3D tools.” This month, he fleshed out his vision in greater detail.

“Omniverse is where we will design, train and continuously monitor the factories, buildings, warehouses and cars of the future,” he said. “Companies can build virtual factories and operate them with virtual robots in Omniverse. These are the digital twins of their physical replicas. The physical version is the replica of the digital.”

For engineering firms that want to leverage the platform for design and collaboration applications, NVIDIA has officially launched Omniverse Enterprise, which is available under subscription, beginning $9,000 a year. The solution is available through NVIDIA partners such as Dell Technologies (you can learn more on the Dell Omniverse page here).

By NVIDIA’s count, Omniverse has been downloaded 70 thousand times. It’s now in the hands of 500 companies, and 40 million 3D designers.

For 3D data exchange, Omniverse Enterprise uses USD, the Open-Source 3D scene description language developed by Pixar. The format is supported by major game and entertainment modeling programs such as Autodesk 3ds Max, Maya, USD format allows users to also access Omniverse content via AR/VR headsets, adding a new layer for realism to simulation. CAD software users will most likely rely on APIs and plug-ins to exchange data with Omniverse, but data can also be imported via neutral file formats such as OBJ, STEP, and IGES that many CAD users are familiar with. (You can learn more about data formats here.)

Richard Kerris, NVIDIA’s VP of Omniverse, calls USD “the HTML for 3D.” He revealed Omniverse Connectors, including one for PTC’s Onshape. The setup could be the template for other major CAD vendors who want to facilitate Omniverse data exchange. By accessing designs and models via Omniverse, engineers can facilitate virtual collaboration and design reviews with co-workers, clients and other stakeholders around the globe, regardless of whether they have direct access to a specific CAD platform.

(You can read more about Omniverse Platform Components, including SDKs, here.) 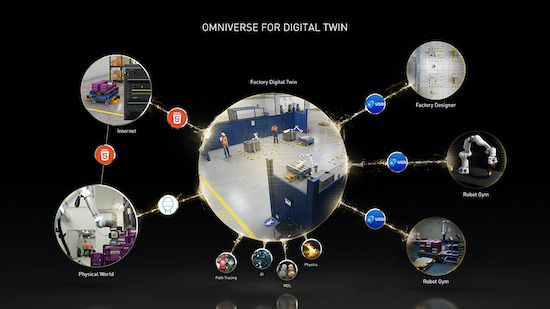 NVIDIA envisions Omniverse as the place for all types of digital twins for 3D assets. Image courtesy of NVIDIA.

All subscriptions include full enterprise support services, upgrades, and maintenance.

Other Omniverse Connectors include Trimble Sketchup, Autodesk Revit, Unreal Engine, and other tools, and NVIDIA indicated that even more applications will be announced in the coming months.

Dell Technologies published a blog during GTC outlining how Omniverse Enterprise could be used in conjunction with its own Dell Precision workstations, Dell EMC VxRail or Dell EMC PowerEdge servers for 3D design and production. According to author John Kelly, Omniverse Enterprise can enable conceptual design reviews across locations; AI training and simulation for production robotics; supplier location; and creating massive, interactive factory layout datasets. Dell also participated in an Omniverse Enterprise panel discussion at GTC, which can be accessed here (registration required).

BMW, Ericsson, Siemens Energy, and Lockheed Martin are among those using Omniverse to build digital twins.

The carmaker recreates the operations of its factories in 3D to optimize operations and improve factory planning. The telecom service provider Ericsson builds realistic city models to simulate and test out 5G coverage and analyze potential obstructions. The company has created a digital twin of its 5G network to simulate and visualize signal propagation and performance using city-scale simulation, 3D models, and datasets from Esri CityEngine.

Siemens Energy builds a digital twin of its Heat Recovery Steam Generator in the Omniverse to optimize its boiler designs using flow simulation and real-world data. By enabling better predictive maintenance of these systems (through simulation of the corrosive effects of heat, water, and other factors), operators could potentially save billions in lost revenue and costly downtime. 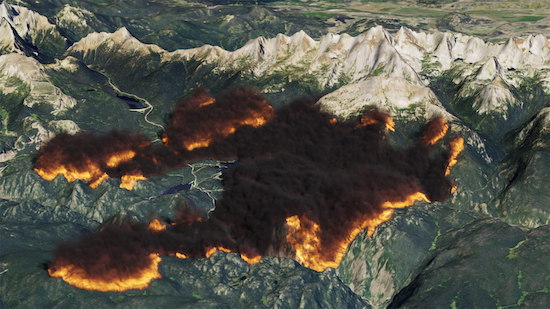 Lockheed Martin is using it for simulating and analyzing wildfires. In partnership with the U.S. Department of Agriculture Forest Service and Colorado Division of Fire Prevention & Control (DFPC), Lockheed is leveraging AI and digital-twin simulation to gain a better understanding of wildfire behavior and potentially stop their spread.

Omniverse Enterprise’s effectiveness as a simulator comes from the embedded NVIDIA PhysX physics engine, used by many game developers to create realistic effects. In a briefing with the press, Rev Lebaredian, VP of Simulation at NVIDIA, said, “You have a simulator that accurately simulates how a factory or a city behaves. You can teleport, jump to anywhere in that world.”

But the features in Omniverse Enterprise won’t replace the existing finite element analysis (FEA) and computational fluid dynamics (CFD) tools used by engineers to simulate flow behavior, heat distribution, and structural deformation. Rather, they may be incorporated into Omniverse. Omniverse Enterprise can aid and augment these tools by providing a platform for realistic visualization of results on a massive scale. An end user with an Omniverse Reviewer subscription can now readily view simulation results even if they do not have the CAE tools installed locally.

“Omniverse will connect all these together to create something better than its parts. We want to take all these capabilities, combine them to do things that were previously impossible,” said Lebaredian in the press briefing.

Huang also provided a glimpse into a number of new Omniverse features that are currently in beta or under development, but not yet available for Omniverse Enterprise. These future capabilities point the way toward even more advanced design, collaboration and simulation capabilities as the platform evolves.

Inside Omniverse, users will be able to generate custom avatars, giving them a way to represent their brand personas. In the GTC keynote, Huang himself appeared as an anime-like 3D avatar, responding to human experts quizzing him on climate change, exoplanets, and the role of proteins in cells. These features are made possible by Maxine, an SDK for AI-powered video conferencing.

As the climate change conference COP26 was also underway during GTC Fall, Huang revealed what might be NVIDIA’s most ambitious simulation project. “We will build a digital twin to simulate and predict climate change,” he said  as he ended his keynote.

The last supercomputer NVIDIA built was Cambridge One, or C1. The new supercomputer will be dubbed Earth 2, or E2. It is, in Huang’s words, “the digital twin of the earth.”

For the full keynote, go to: https://www.nvidia.com/gtc/keynote/.