A New Look at Workstation Displays

A new generation of workstation-class monitors can improve ergonomics, increase user productivity and improve the connectivity dynamics of having more than one work environment. In the engineering space, there are now a wide range of display options that can enhance workflows that are increasingly dependent on real-time rendering, simulation, and accurate visualization.

Modern displays can provide significantly higher resolutions and larger work spaces that are critical for rendering, multi-tasking, and other activities. Research has confirmed the increased productivity of using multiple task windows in both single- or dual-monitor configurations. In a Wichita State University study, participants were first assigned tasks to do on a dual-screen setup, then moved to a single 17-in. screen for similar tasks. By the end of the study participants “were often observed to show disappointment” when asked to use the single monitor.

In a Georgia Institute of Technology study, participants were able to complete tasks nearly 2.5 minutes faster using a dual-monitor setup. If one employee gains 5 minutes per hour doing such tasks, that adds up to an hour a day per employee.

“Our studies have found that in some cases productivity can be increased by 50% or more with multiple monitors,” says Jon Peddie, president of JPR. “Realism and the details revealed with more display area not only improve understanding in a visualization, but increase enjoyment. It’s tiresome to have a constrained view of the world; it’s like looking at the world through a tube or a pair of binoculars.”

According to Matt Mangum, Team Lead for Global Commercial Displays at Dell, monitor advancements are closely paired with the continued evolution of professional workstations like the Dell Precision line.

Monitor needs also change right along with workflows and data requirements. “Once people put a display in place, they tend to treat them like a piece of furniture,“ Mangum says. “We do have more customers now that recognize the benefits that the higher resolutions and new shapes, connectivity and color spaces can provide.“

“I think our workstation customers understand that going cheap on the display is really just shooting themselves in the foot,“ Mangum says. “If you are using a seat license that costs $100,000 a year for a big project, having a poor display doesn't help anybody. Having that extra resolution or multiple displays gives you more ways to work more flexibly, more comfortably and more efficiently.“

In the case of Dell, its UltraSharp monitors not only offer high resolution and a large color gamut, but can also be linked to multiple computers simultaneously. The company has also provided more flexibility for users that need multiple displays, offering single stands that can support two monitors, as well as the Dell UltraSharp 49-in. curved monitor, which can provide multi-display functionality in a single unit. 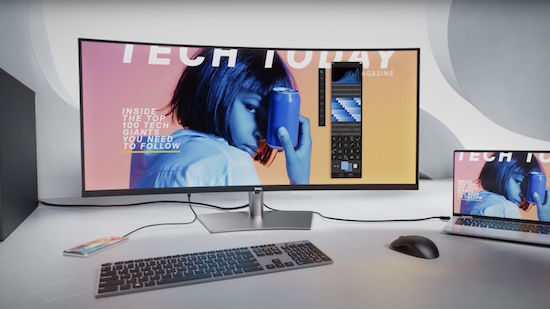 The new Dell UltraSharp 40 4K curved monitor provides an effective resolution of 5120x2160 and 33% more space than a standard 32-in. 4K monitor.

The improved resolution of new monitors can enhance the performance of rendering and visualization in engineering. “Monitors really improve workflow,” says Danny Payne, CEO of Orbital Computers. He says one of the most important innovations for engineers is software support for 4K resolution (4096x2160 pixels). When Windows 10 and monitors with 4K resolution became mainstream, they were used primarily for gaming and video production.

“Engineers would buy a 4K monitor but their CAD program would not scale elements properly to support the monitor,” adds Payne. Because 4K monitors offered quadruple the resolution of the previous generation, but the software wasn’t supporting the increase, drawings and models would appear one-fourth the size the user expected. But now, all CAD vendors are directly supporting 4K and the results are spectacular.  “Once you use 4K for CAD, it is impossible to go back to [high definition],” says Payne. “Everything looks so much sharper, diagonal lines in particular.

Since then, new 8K monitors have also been released, but Mangum cautions that higher resolution can come with diminishing returns depending on the use case. “Higher resolution gives you a bigger work space, but once you get into very high densities the users can be less comfortable to look at,“ he says. “The human factor is really important.“

The expanded color gamut is also important, particular as more engineers are directly involved in frequent rendering of designs throughout the product life cycle. Dell’s UltraSharp Monitors provide detail up to 1.07 billion colors, and enable users to create images in HDR10 (on UHDA Premium HDR10-certified models).

As Mangum describes, the expanded color gamut gives engineers a “bigger box of crayons'' to improve the quality of their output.

“These days, more and more content and products we create are going to be evaluated and consumed in a more consumer-based visual environment,“ Mangum says. “The software tools available now are much more powerful, and the GPUs have incredible capabilities with ray tracing and rendering. Being able to build within those expanded color spaces and know that, even in a review, everything is going to look right will prevent problems down the road.“

Display connectivity options have also evolved in ways that can improve workflows. It is typical today for workstation-class monitors to come with USB-C connectivity. USB-C technology allows for a single cable to provide audio, visual, data transfer and electric power.

“Our vision is that the monitor is the hub,” says Dell’s Jayakumar. This allows for the mouse, keyboard and an [external] solid-state drive to be hooked to the monitor, instead of the computer. “It makes for a clutter-free environment,” he notes.

“Having the simplicity of the USB-C port is worth the compromise in terms of the absolute number of pixels you can push,“ Mangum adds. “USB-C is built on the DisplayPort platform. As they both advance, the bandwidth compromises are going to be minimized.“

Modern monitors can also provide more workspace flexibility. Dell offers a software tool called Display Manager with its workstations that allows users to better organize the workspace on the display in ways that can help enhance productivity.

According to Mangum, engineers can look forward to even more advancements in display technology moving forward. For one, there is a push to adopt fash-refresh technology in commercial displays. While fast refresh is typically associated with gaming setups, engineering applications could also benefit from the ability to scroll and scan across images and files without blurring. Increased use of VR technology within design applications could also benefit.

He adds that industry adoption of technologies like USB-4 and Thunderbolt 4 will provide even more display flexibility. “Customers can look to us to continue innovating on display performance and really pushing the envelope of what is possible,“ he says. “You will see higher resolution, better contrast, and a lot of effort to make the monitor the central hub of the engineers daily work.“