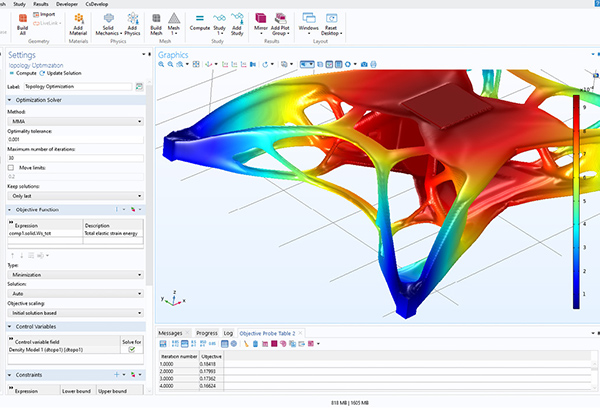 The Power of Virtual Experiments
COMSOL users from around the world shared their stories with us, and now we are looking forward to sharing their expertise, insight, and innovative ideas with you.
Limits of FEA Automation
As templates and apps broaden simulation’s reach, experts get a new role.
FREE HOT SEAT WEBINAR June 23: Can You Trust Your Digital Twins’ Predictions?
In this Hot Seat discussion panel, learn how to verify the reliability of digital twins and hear about real-world success stories.
Optimizing Wireless Test Systems and Antennas for High-Speed Communication
Bluetest, a pioneer in wireless test solutions, designs reverberation systems used to measure the performance of wireless devices and wideband antennas. They use RF simulation to streamline their development cycle of design, fabrication, testing, and validation — enhancing high-speed wireless communication...
FREE WEBINAR MAY 26: Under the Hood of Easy-to-Use FEA Applications
Learn tips and tricks for optimizing simulation automation and simplification in our next Hot Seat panel.
COMSOL Event Series to Target Acoustics Simulation
Three virtual COMSOL Day events will tout the impact of multiphysics simulation for industries that generate audio and acoustics products.
COMSOL Company Profile