CPU leader eases into rendering with with new offering 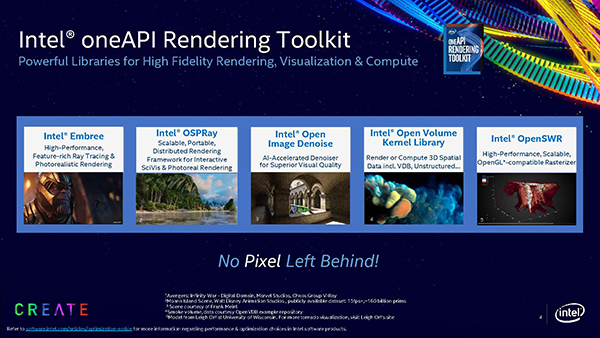 This week, as SIGGRAPH kicks off, Intel makes a move on the GPU-dominated rendering market with the introduction of oneAPI Tool Kit, a scalable HPC platform.

“The toolkit is designed to accelerate workloads with large data sets and high complexity that require built-in artificial intelligence (AI) through a set of open-source rendering and ray-tracing libraries to create high-performance, high-fidelity visual experiences,” according to the product home page, now marked as Beta.

It's a “unified standard-based programming modem” that works with all “XPUs, including CPUs, GPUs, FPGAs (field programmable gate arrays), and other accelerators,” Intel states.

In the online press briefing with industry press, James Jeffers, Sr. Principle Engineering and Sr. Director for Advanced Rendering and Visualization, Intel, said, “Our focus isn’t on just the CPUs or just the GPUs. The goal is, no transistor left behind.”

No Transistor Left Behind

There is, of course, no such thing as an Intel XPU, but by Intel's definition, all CPUs and GPUs are XPUs—microprocessors with the potential to accelerate workloads. Positioning the new oneAPI Tool Kit as XPU-friendly sidesteps the long-standing CPU-GPU rivalry in rendering and visualization.

“oneAPI is an open specification and we are willing to work with and encourage vendors to apply that. We believe the market will ask them to do that as well,” said Jeffers.

Intel is inviting early users to give the product a try. “Develop, run, and optimize your Intel oneAPI solution in the Intel DevCloud—a free development sandbox with access to the latest hardware from Intel and Intel oneAPI software,” says Intel on its site.

Rendering or machine-learning code that relies on GPU acceleration (for example, CUDA-based solutions running on NVIDIA GPUs) will likely require rework and revision to be oneAPI-compatible. Therefore, the success of oneAPI depends on the ease of converting existing codes, and the following and adoption it attracts over time.

“The Intel DPC++ Compatibility Tool is a new tool that will assist developers in migrating some portion of their existing code written in CUDA [programming language for NVIDIA GPUs] to the newly developed DPC++ language. Our experience has shown that this can vary greatly, but on average, about 80-90% of CUDA code in applications can be migrated by this tool. Completion of the code and verification of the final code is expected to be manual process done by the developer,” explained Jeffers.

Early adopters of Intel's oneAPI include Bentley (for its online real-time car configurator) and Chaos Group (makers of the V-Ray renderer).

“We have fairly close relationships with CAD vendors. Autodesk is one of them. Dassault Systemes is a close partner,” said Jeffers.

Intel plans to release OSPRay Studio, a raytracing and photorealistic rendering environment, into the oneAPI Tool Kit in the near future. 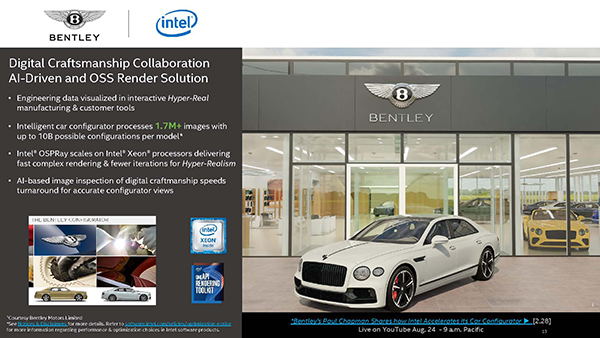